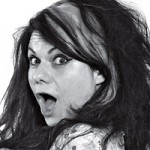 Your day job is writing for a newspaper. Didn't you once end up at a sex club with Lady Gaga?

Yes. This was at the time the rumor was going round that she was secretly a man. I saw her vagina when she was on the toilet. I quickly checked, as a journalist would, and I was able to break that news in the Times of London, one of the oldest and most respectable newspapers in the world.

We've been talking for only a minute, and you've already brought up vaginas. There was recently a bit of controversy in the U.S. about whether this word can be used in polite company.

The word, yes. The actual thing, often no. I read up on all the controversy in the U.S., and it seemed nuts to me. I wanted every woman who was in that room to stand up and just say the word vagina and sit back down again, like in Spartacus. I'm Spartacus! I'm Spartacus! I'm vagina!

Do feminists need humor to get their message out?

I will never dis my feminist forebears, because I can see why they were angry. If you just make what you think is right look cool, then you don't need to convince anybody. I see feminism as a massive party. It's cool, the idea that 50% of the population can now start doing things and having fun and experimenting with their hair and makeup.

Feminism is about experimenting with hair and makeup?

So talk about your hair.

Why did you get a Kate Middleton makeover last year?

The Times likes to send me out as the token working-class, slightly overweight white person who pretends to be posh and thin. But as a feminist, I feel sorry for Kate Middleton because if she ever does put on weight, that will be headline news. I want us all to think about the fact that one day she might put on weight and prepare ourselves for when people go, "Have you seen Kate Middleton's put on weight?" to have a perfectly calm face and say, "So what?"

What did you think of the Olympics opening ceremony?

It was so brilliant and beautiful. The bit where I just burst into tears was when Tim Berners-Lee, who'd invented the Internet and gave it away for free, turned up and typed out, "This is for everyone." I never knew he'd said that. I burst into tears, and my sister, who's a web programmer, said, "Oh, dude. Did you not know that quote?"

Your book, How to Be a Woman, quotes Simone de Beauvoir: "You're not born a woman, you become one."

You're also writing a novel?

It's about how when you're a teenager, you realize you can't be the person that your parents want you to be. You then decide to make yourself. But it's got loads of jokes in it. And loads of bondage. It's very post--Fifty Shades of Grey.

Is How to Be a Woman doing for feminism what Fifty Shades has done for rope sales?