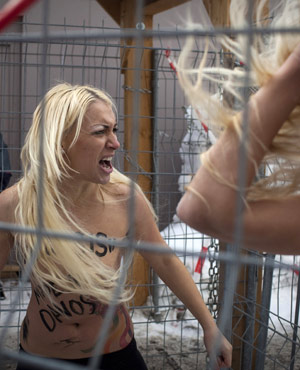 Topless Ukrainian protesters demonstrate from the group Femen, which stages small, half-naked protests against a range of issues including oppression. (Anja Niedringhaus, AP)

Moscow - A total of 215 Russians have died this year in a prolonged period of abnormally cold winter weather, the health ministry said on Monday.

From January 1 to February 13 215 people died and 5 546 people suffered from hypothermia and frostbite, among them 154 children, the ministry said in a statement.

While accustomed to frosty winters, Russia has seen 20 days of unusually cold weather, with the average temperature falling 7-14Â°C below average, the state weather service said.

While Russian apartment blocks are generally well heated, the homeless are particularly at risk.

In Moscow, the temperature was minus 20Â°C on Monday afternoon, the state weather service said.

The all-woman group spent around 10 minutes doing the stunt before being escorted out by security guards, an AFP photographer witnessed.

Over the last 24 hours, the coldest temperature measured in Russia was -52.8Â°C in Toko in the northern Sakha republic, the state weather service said.

This month the Russian health ministry issued advice to Russians about how to avoid frostbite, warning that wind and damp cold makes it more likely, as does wearing tight footwear that cuts off circulation.

It also warned that up to 80% of people who get frostbite are drunk, making them lose heat more quickly.