According to Shevchenko two fundamentalist preachers were discussing violence against women when the activists, aged 25 and 31, ripped off their Arab-style cloaks and jumped on to the stage on Saturday evening. One had the slogan “No one subjugates me” inked across her torso. The other bore the words “I am my own prophet”.

The protesters, aged 25 and 31, grabbed microphones and shouted feminist slogans in French and Arabic before being roughly bundled off the stage by about 15 men and handed over to police. Video footage of the incident shows a man apparently kicking one of the women.

'We are playing with standards of beauty and sexiness': a FEMEN protest at Davos in 2012  Photo: Getty

One of the women has since been seen a doctor for her bruising as she was shoved off the stage so hard Shevchenko said - but is “doing ok”.

She said that the group, which now has 10 branches around the world, was first alerted to the conference after seeing people were protesting about it on Facebook.

“One of Femen’s missions is to shine a light on things which oppress people and the mainstream media are ignoring. We saw this event was happening and that people were campaigning online for it not to go ahead due to the views of some of the Imams about what a woman’s role should be. And so we decided to go and draw attention to it.”

Shopping and cooking were showcased at the event as appropriate “feminine activities” for Muslim women. One speaker at the conference has reportedly posted calls on social networks for women to veil their faces or risk hellfire and sexual assault in the afterlife.

Thousands of people signed an online petition against the event.

Since Femen’s protest, Twitter posts have called for the activists to be stoned or collectively raped.

Shevchenko, who is based in Paris, also said she had personally received online abuse and “people had been mocking up fake photos of her giving the Nazi salute” since the event.

“We have had hundreds of thankful messages too in France too. But our message and protest has also been used by France’s extreme right as a justification for Islamophobia – which we don’t agree with. It’s ironic as we have demonstrated against those people too.” 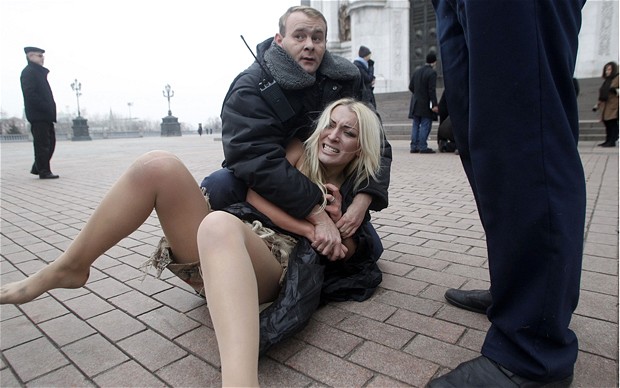 Femen has branches in France, Spain, Netherlands, Sweden, Ukraine (where it was founded and from where Shevchenko hails), Germany, Mexico, Israel and Turkey.

A UK arm had been due to open in 2013 but Shevchenko said it hadn’t happened yet due to “visa and other technical issues”.

“We still want to bring Femen to the UK and we know there are women who want to join us [in Britain] but I just haven’t been able to set it up yet or sort out the training needed to get it off the ground.”

The protest group is now in its seventh year and for the last five it has used topless protests as its main activism statement – in a bid to reclaim the female body, restyling it as a political poster and bare it to those who oppress others.

However, Shevchenko, who is 25 and works as a freelance writer in her spare time to support herself, explained that Femen has recently cut back on the number of topless protests in order to do “fewer events which have a greater impact”.

“We have around 300 women who are trained as topless activists around the world and behind them we have many other members, men and women, working on organising protests, filming our events and dealing with our legal issues.”

One of the leaders of the movement, she has personally cut back the topless protests she does because she is recognisable and can’t go into locations undercover anymore.

The group has been accused of Islamophobia in the past, something Shevchenko strongly refuted:

“We oppose all religious institutions that try to come into public life and seize political power, not just Islam. For instance our Israel branch has protested against religious Jewish men who refuse to sit with women on planes.

“But Islam at the moment, I would say, is the most ambitious religion – it is like a teenager screaming out. We see how Islam is entering public debate more and more – while restricting women’s rights.”

Answering those who criticised the group for patronising Muslim women with their latest protest, she was at pains to stress that both protestors (who haven’t been named) were from Muslim backgrounds – coming from Tunisian and Algerian families. But she also defended anyone’s “right to be offended”.

“We aren’t politicians. We are activists. It’s not our job to make the changes needed to stop the system discriminating against women and other groups. It’s our job to draw attention to it.”

Organisers of the Muslim conference have said it was “the victim of an anti-Muslim media frenzy.”

Shevchenko said she was fully committed to the “cause of Femen” even though sometimes it was “difficult to cope with the abuse, death threats, criticism” that she receives.

She was in speaking at the free speech debate in a café in Copenhagen earlier this year when a gunman opened deadly fire.

She added: “Sometimes I feel like I want to prove to people what we are doing is right, but I know if it wasn’t worth doing – we wouldn’t be getting threats and I wouldn’t be standing in a café talking about activism and hearing the sound of a Kalashnikov.”