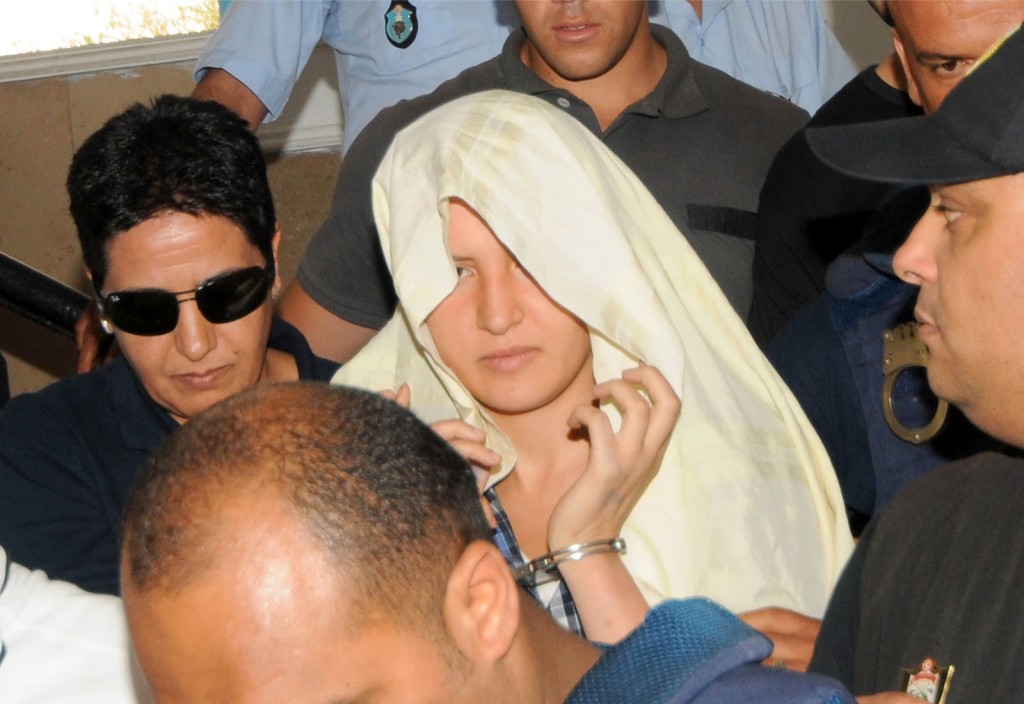 Amina Sboui, center, the Tunisian member of the Ukrainian feminist group Femen appears handcuffed before an investigating judge at the courthouse of the central city of Kairouan on June 5, 2013. (AFP Photo/Salah Habibi)

Tunis. Amina Sboui, the young Tunisian arrested for an anti-Islamist protest, has become a symbol of resistance to religious intolerance for Western feminists, but opinion at home is divided over the activist inspired by topless protest group Femen.

Under the pseudonym Amina Tyler, she sparked a scandal in March by posting topless pictures of herself on Facebook, defying Arab-Muslim convention.

Her action provoked angry threats from radical Islamists who were repressed under Zine El Abidine Ben Ali and have become increasingly assertive since the revolution that ousted the dictator in 2011.

“Everyone has the right to express themselves in their own way and I chose my way of doing so in the style of Femen,” she told AFP in April.

She condemned the “conservative restrictions, on civil freedoms especially after the rise to power of Ennahda,” the Islamist party that won a post-revolt election and heads the coalition government.

“I would be happy to see the fall of Ennahda,” said the 18-year-old rebel, as she smoked a cigarette, adding she welcomed her new-found fame.

“Of course I’m happy to become a celebrity and attract media interest.”

With her short hair, dyed platinum blonde, and thin, delicate features, Amina explains how the topless pictures shocked her family, who she says abducted and beat her, trying to force her back into line.

Her mother denied the accusation, saying she wanted to protect her after threats from Islamists, and insisting that her daughter, who has suffered from depression since she was 14, should remain at home.

“My daughter has suffered psychiatric problems since 2009 and has been examined by doctors in the [psychiatric] hospital in Razi,” near Tunis, she explained.

Medical documents shown to AFP appear to confirm her claims.

One, dating from March, says she “has for several months shown a relapse with insomnia, sadness, irritability with explosive reactions, delusional ideas, self-deprecation and guilt, behavioral problems including suicidal and self-harm tendencies.”

The young woman says she had a difficult childhood, partly spent in Saudi Arabia, and that she was molested when she was very young.

Her mother again disputes the claim, insisting the Femen movement has exploited her vulnerability without caring about her future.

Amina rejected her mothers warnings and ran away from home in April, deciding to continue her protest campaign while waiting for a visa to France where she hopes to finish her studies.

On May 19, she was arrested in the holy Islamic city of Kairouan for painting the word “Femen” on a wall near a cemetery, in an act of protest against a planned Salafist gathering that never took place, after it was banned by the government.

She is due to appear before an investigating judge on Wednesday, and could face charges of indecency and desecrating a cemetery, crimes which carry possible prison sentences.

Feminists in France have hailed her as a heroine, with the topless protest group Femen sending three European activists to Tunis to bare their breasts in support of her, the group’s first demonstration in the Arab world.

“Clearly it’s easier to incriminate a child who does not lack boldness or courage… A child who knows what she doesn’t want and is trying to wake up these people who wish to remain deaf, dumb and blind,” French blogger Caroline Fourest wrote.

In Tunisia, Amina’s support from the anti-Islamist opposition is more measured.

Feminist activist and MP Nadia Chaabane says she backs the young Tunisian in getting herself acquitted, but frowns on the Femen protests.

“I think that she is an adolescent who is slightly lost, but the fury directed against her is not justified,” she said.

Mounir Sboui, Amina’s father whom she is close to, said he was “proud” of his daughter for her ideological commitment, while also describing her acts as excessive.

“Her actions were excessive but she defends her ideas,” he said.