Those pesky topless protestors are at it again, and this time they are back at St. Peter's Square protesting the Vatican as the election of a new pope takes place just meters from where they stood topless, according to a March 12, 2013 news report from La Press.

The group FEMEN, originally started by Ukrainian human rights protestor Anna Hutsol, stood before the Vatican with bare breasts exposed, to expose what they feel is years and years of controversial beliefs that are no longer relevant.

A post on FEMEN’s Facebook Page explains their belief in the current value of the Vatican today.

FEMEN says the Vatican and its institutions are blocking the road to progress, which we inherited, turning our back to the dark ages. The Vatican must die and with it, his "sacred" attributes: pedophilia, homophobia, corruption, misogyny, the struggle against contraception, control of private life !
The retrograde thought must live its last moments ! 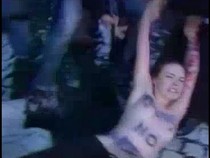 The group wandered St. Peter's Square symbolically spreading red smoke around Vatican City to demonstrate what they feel is the bloody history behind the Catholic Church.

FEMEN sextremists barged in St. Peter square in Vatican that was occupied by religious. While believers expected black and white smoke from a pipe, activists of FEMEN activated the torch with caustic blood-red smoke. The color of smoke is a symbol of the bloody violent history of Christianity and expresses FEMEN's determination to combat sexism of religion.

The two topless protestors were arrested a mere two hours before the black smoke rose from the Vatican.