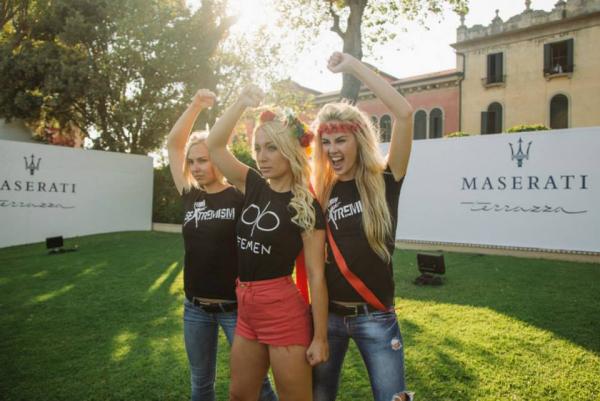 This story is part of True/False Conversations, a series of in-depth interviews with the filmmakers of this year’s True/False Festival.  Find the rest of them here or download the podcast on iTunes.

“Ukraine is Not a Brothel” gives an intimate look at the world’s most controversial feminist movement.  Femen created a media frenzy in Europe as its members spoke out against patriarchy by way of topless demonstrations -- writing protest messages on their bare chests. As the movement gets larger, Femen's activists learn they must face the dark forces that power their organization.

I spoke with Kitty Green, the director of the film, about the lasting impact she hopes her film will leave.

How did you find out about this story?

I read about them in a newspaper, like a really bad tabloid B-grade newspaper that we have. I found it on the floor on a train in Australia and saw a picture of one of the girls and she was topless and holding a sign that said ‘Ukraine is not a brothel.’ I thought that it was a really beautiful image and kind of a little contradictory and she looked a little naive but strong at the same time. I was really attracted to that image so when I was there I looked them up.

What were the biggest challenges with shooting this film?

There were a lot.

It was dangerous inherently because the girls were getting arrested a lot and they were protesting against the government and it’s an anti-government organization so it was scary almost daily to be a part of them. Also, I didn’t like the way the organization was run so I was making a documentary that painted them in not the most positive light so I was working against the girls as well as working against the government so I was in a really tricky position. So morally it was very difficult, they were my friends and I wanted them to trust me but I wanted to tell the truth and the truth would hurt the organization. So yea, it was tough in a lot of ways. I guess in the end it was tougher for me to be really honest with the girls and get them to tell the truth than it was to get arrested. I kind of got used to getting arrested.

What do you hope the audience takes away from the film?

I was sort of amazed by just how little rights women had over there. I first kind of went over and I was 25 and everyone kept asking me, “how come you’re not married, why aren’t you married yet?” I kept thinking, “I don’t have to be married do I?” But they thought that was a sign that I was somehow bad or something and that whole kind of culture exists and not many people talk about it. These girls that are fighting against that stereotype are also living under this patriarchal system themselves and trying to break free of it. Yea, I don’t know, I hope they learn a little more about just how messed up the world is.