Cops are afraid of our boobs: Gazeta.ru interviews FEMEN
In an interview to Gazeta.ru, FEMEN activist Alexandra Shevchenko compared footballers with sperm cells and the ball with an ovum. She thinks that football is a silly game

Copy and paste the html-code below: 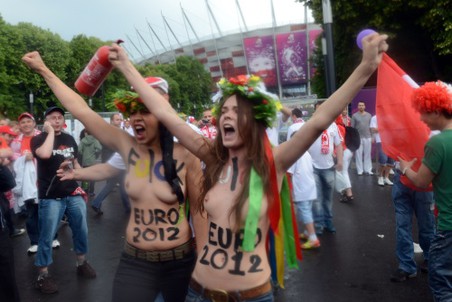 In an interview to Gazeta.ru, FEMEN activist Alexandra Shevchenko compared footballers with sperm cells and the ball with an ovum. She thinks that football...

In an interview to Gazeta.ru, FEMEN activist Alexandra Shevchenko compared footballers with sperm cells and the ball with an ovum. She thinks that football is a silly game and that Euro-2012 is tightly linked with the sex-industry. She also told a scary story about how FEMEN activists were kidnapped in Belarus.

FEMEN organization has its office in the center of Kyiv. Its doors are decorated with two sharp ended cones. Alexandra Shevchenko, FEMEN's top activist, says they are "boobs." Inside the office there is a spacious room with a picture of a Vitruvian Man with female breasts, an open mouth and "Fuck Euro-2012" written above him.

-Do you play sports?
-Sometimes I do, but with no real results. We'll try harder.

-Have the police already come to your office?
- Not yet. They probably do not know where our office is located. We moved here a month ago. It may be simply that they are waiting. Maybe they have set listening bugs all over here (laughs). When we were gathering in a café, the police often visited.

-Would it be possible to open a FEMEN office in Russia?
- I think not. The situation in Russia is now worse than in Iran.

- What is the goal of your organization?
- A female revolution.

-How do you lead a revolution?
- Hell if I know…

-And yet...?
-Maybe it should be done the bloody way. Or on the other hand, may in a humanist way. Maybe it would be a direct war between men and women, a war against patriarchic traditions in society, which would lead to deaths because men would not desire to give in that easily (smiles).

-Why have you chosen to express your protest in a sexual way?
-We did not plan to get naked at first. But then we understood what outrage was going on during 2012 elections. We started to act more roughly. We decided that we should get naked.

A naked woman is a free woman.

We may be naked in Ukraine, but if we go naked in Russia, we will get 12 days in jail and a deportation. And a fine of several thousand dollars. It is idiotism, we think.

-Now you have adherers abroad..
-Yes. There is a girl from France, a woman from Canada. Soon we are waiting a woman from Brazil to come. The one that was fired from her job because she was linked with FEMEN. She will stay in Kyiv for 2 weeks.

-Why don't you like Euro-2012? Why did you throw its cup?
-Major sport events are usually sponsored by beers companies. The goal of these companies is to make people drunk. The Sex-industry is not far from behind. Germany legalized prostitution right before the World Championship in 2006. It is clear that the will be a sex–tourism boom in Ukraine during Euro-2012. We already have examples. Numerous clubs for men have been opened near the Kyiv stadium.

They are functioning as brothels and police cover them.

-But on the other hand, Euro-2012 as been very profitable for Ukraine..
-The fact is that there can be no profits. Yanukovich said in March that the championship is unlikely to pay off.

-Do you really think that your actions will lead to closing a men's club near the stadium?
-Of course, brothels do not close just because we throw a cup. although football fans do write to me on Facebook.

They ask if they can come to Donetsk, they promise not to have sex with Ukrainian women and that they simply want to watch football.

This is a sign that our actions are working. UEFA is afraid of us, too. Stewards are taught how to take FEMEN activists away. As you know, we have recently gone to Poland. Each policemen had pictures of us, our passport information! They were searching for us in the crowd, they wanted to avoid a new scandal. But we won again.

Can you imagine 100 police officers against 5 women? The cops are afraid of our tits.

-And why are they afraid?
-Just because they think in a patriarchic way. They want to have control over woman's sexuality, which they think can be expressed only in bed or in the kitchen. And we just turn these stereotypes upside down, the situation is uncontrolled, the cops are in a panic!

The Sexual revolution in Europe happened 30-40 years ago, but it hasn't happened in Russia, Ukraine and Belarus yet.

-You once called Polish football lovers "rabble fans." Don't you think it was rude?
-But it is true. Football fans can be very aggressive at times.

And the most interesting fact is that they are normal people. But they behave awfully during football matches. They drink and shout loudly.

-You are so negative towards football…
-It's a silly game… Sperm cells are chasing an ovum in order to fertilize it – that is our definition of football.

-You are famous all over Eastern Europe now. How do you manage to conduct new events?
-It's hard to say.. (sighs). We prepare very thoroughly. We carefully study the area, conduct reconnaissance in advance. We all have almost same the bodies and figures. So, it is not that hard to identify our group. We try to wear baggy clothes that hide our silhouettes. We hide our hair. In Poland, for example, we put on red and white hats. In addition, we walk arm in arm with friends, journalists and photographers. We pretend that they are our boyfriends. There is always one person standing on the site of our action, he constantly calls journalists and tells them about the current situation.

-You conduct more and more events each year. It will not be a surprise if police start checking the documents of all pretty women…
-It was like that in the Vatican. We thought that no one knew us in Italy. We intended to turn up wearing robes. Well, transparent robes. However, we ended up wearing jeans. There were three of us. And we were very surprised that the St. Pauls' Cathedral's security officers searched all blondes, that means they were preparing to meet us. I was walking with a guy, so apparently that saved me. They thought we were a couple.
Once we even got chased afterwards. It happened in the city of Lviv. It was on the day when one of use threw the Euro cup.

-How did you find out about the chase?
-We arrived to the city early – at seven, or eight in the morning. Two hours later, we realized that we were being watched. A guy in a hood constantly loomed before my eyes, making us nervous. At first he tried to pry quietly, but then began to follow openly. Sometimes he acted simply idioticly - hiding behind pillars, glancing behind arches.
If we were not so experienced, we would become frightened. But we had a wild desire to reach our goal.
As a result, our girl hit the cup. She approached it, took a picture with it and then… boom! She threw it down. We were laughing on te reaction of the security guards. They were trying to catch our activists instead of trying to catch the cup.

-What happened in Belarus in December 2011?
-Three of our girls - Oxana, Inna and Sasha held a rally in front of the KGB office in Minsk. They put on a false mustache, did up their hair like Lukashenko and took banners. Some unknown people ran out of the building and started to arrest all journalists. They took away their cameras. Suprisingly, our girls remained untouched and they decided to go back home to Gomel in Ukraine. When they were at the railway station , 10 men approached them and dragged them into a bus. The girls were driven away in an unknown direction. They drove all night. They were constantly interrogated. The men said: "We are waiting for a decision on what to do to you." Around seven in the morning, they were transferred to other people, they had their eyes covered. The kidnappers were wearing masks.

One of them said: " We are going to kill you. You may remember your parents and how Iife was good in Ukraine.

They took the girls to a forest, started to offend them. They ordered them to get naked. Then they gave them banners with fascist symbols and forced them to smile. Men in masks said they were members of a nationalistic group.
Then the irls were ordered to take off their pants. They did not rape them, they were beating them with clubs. In the end they poured a brilliant green on them and brought them to a river. That was the border between Belarus and Ukraine. They were then released.

– How did Ukraine's government react to the kidnapping of your activists?

– There was no reaction. There were no protest. Belarus officials said we made up this story.

– Do you support Pussy Riot?
-Yes, we do. Pussy Riot is like a Russian FEMEN. They use our ideas. But they do not get naked because Russia's society is too patriarchic.

-Does FEMEN have a Russian office?
-Unfortunately, no.

- Let's pretend you get detained. What happens next?
- They make up protocols, then they take us to the court. The court decides the punishment - whether we should be arrested or fined.

- Do police officers try to flirt with you?
- Yes they do, but we can do nothing about it.

- You must have your own favorite police departments now..
- We love the Pecherskoe department. Its head is very kind to us. The Shevchenkovskoe department, however, hates us.

- When did you become a feminist?

-I was 18. Before that I thought that a feminist was a woman who hates men. Then I met Anya Gutsol (the leader of FEMEN). T first I thought she was crazy. But then I changed my opinion. We now fight for the rights of women.

- Do people in streets recognize you? Not police officers, I mean.
-Sometimes they do. Especially in the metro. Especially women. They approach us, speak of their difficult lives and about their children.

-Do they ask to take pictures?
-Yes, especially men.

-You held actions in Poland, France, Italy. How do you get money for these trips? Did someone sponsor you? Or do you use your own money?
-We sell T-shirts, cups and other stuff.

-Is it that profitable?
-In reality, yes, it is.

People from all over the world send money.

Our foreign trips were paid by the receiving party.

-How do your boyfriends treat your ativity?
-If a FEMEN activist has a boyfriend that means he unequivocally supports FEMEN.