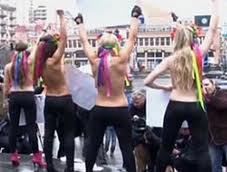 Streakers, nudists and scantily dressed protestors, they manage to grab our attention for their sheer outrageousness, daringness and lack of inhibitions.

However, while we cannot avoid having our attention riveted by a woman running topless across a football pitch, do naked protestors hold the same solemnity, urgency and ‘respect’ as those protesting with their clothes on?

Ingrid Newkirk is a well-known animal rights activist and president of People for the Ethical Treatment of Animals (PETA), the world’s largest animal rights organisation.

Much of Newkirk’s notoriety can be pinned on the deliberately outrageous media stunts she organises in order to draw attention to animal rights issues.

Her famous statement, “I’d rather go naked than wear fur,” quickly evolved into a campaign of the same name, which has included numerous tactics and photos of naked ladies touting veganism and advocating animal rights.

Ingrid Newkirk’s sensationalist approach to protesting has certainly earned her the publicity she sought, but does it mean that her causes are taken seriously?

An interesting incident involving Newkirk and her battle for animal rights recently surfaced in the media when Newkirk voiced her outrage about a photograph of a raunchily posed pre-cooked chicken published in the New York Times.

Newkirk described the photograph as “downright offensive”, as “necrophilia”, and “ghastly and sickly.”

The author of the article refers to Newkirk as “the militant founder of the hardcore-porn promoting animal rights lobby PETA,” and goes on to explain that Newkirk’s latest hypocrisy is also lost on the RSPCA.

“While PETA chooses to use celebrities and images of scantily clad young women to publicize many of their campaigns, the RSPCA is an animal welfare organization which bases its policies on science and common sense,” said RSPCA Tim Mayne on petawatch.com.

The reactions to Newkirk’s rants and the condemnation by the New York Times highlights that those who advocate science-based policies always triumph over what could be referred to as deeply divergent, semi-pornographic, desperate publicity stunts.

A History of Using Female Nudity

While some may say the practice of topless protests is extreme, Ingrid Newkirk’s and others efforts in using nudity as a means of attracting more attention to protests are not exactly new.

In the early 20th century, the Doukhobors used mass nudity and arson as a means of protesting against government interference in their lives.

In 2010, activists from FEMEN, a women’s rights group from the Ukraine, carried out a topless demonstration in Kyiv in protest against the Russian Prime Minister, Vladimir Putin’s visit.

The group is notorious for protesting topless, and earlier that year marched topless outside the Cabinet Minister’s office in remonstration of the New Ukrainian government’s exclusively male cabinet.

The provocative acts of FEMEN certainly draws attention to themselves, and it gives them the publicity they strive to create. However, a group of beautiful, blonde-haired women prancing about topless, in my opinion, draws more attention to their bodies and their sexuality than it does the issues that they are protesting to be amended.

Reactions Remain Mixed in the Media

While the cultural and legal acceptance of nudity varies a great deal from country to country, there does seem to be a general tolerance of public nudity, with people generally smiling coyly at the protesters – unable to resist ‘taking a glance’.

This said, using nudity as a means of drumming up attention to important issues, such as animal rights and government austerities, creates mixed reactions from the media.

One example of this was a media report about the antics of FEMEN when Vladimir Putin visited the Ukraine. On NDTV, ZakirHussain, an opponent of the ‘indecent exposure’, posted the following comment:

“Topless protests seem to be senseless! There should be a limit for everybody’s right and that right must be determined by themselves in a civilised manner.”

Whilst another NDTV reader commented:

“Don’t know whether it’s a way of attracting one’s attention to the real issue or a way of coming in media.”

Whilst spellbound “Akshay” wrote, “I wish we had those beautiful femen in India! WOoooOW.”

I think that these three different comments sum up nicely the fallacy of topless and nude protests. Yes, they certainly create a whirlwind of attention, but the attention, I believe, has the wrong focus.

Gabrielle Pickard is a freelance journalist that seeks out stories mainstream media misses. She endeavours to enlighten readers about news they were never aware existed.
GabriellePickard has 54 post(s) at Top Secret Writers

Allegations That Egypt Paid Protestors to Incite Violence As though things couldn't get any worse in Egypt, reports are coming in from all major news agencies...

What Made the Occupy Movement Spread While Others Have Failed? "We have been able to change the dialogue in our country, from 'Where are we going to cut our budget...

Wisconsin Protests Provided Clues About Upcoming Occupy Movement 2011 could be described as the year of the protests.

First it was the Arab Spring, which saw a wave...