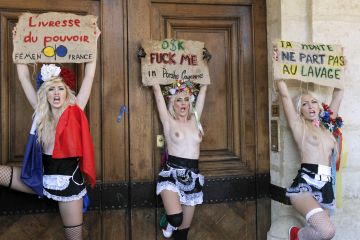 Dominique Strauss-Kahn — accused of sexually assaulting a maid in a New York hotel in May — has celebrated his wedding anniversary with wife Anne Sinclair in Paris.

Meanwhile, Strauss-Kahn's supporters suggested that a story in the New York Review of Books provided evidence that the sex scandal was part of a plot the party of President Nicolas Sarkozy to disgrace the former International Monetary Fund chief.

According to The Independent, the article, written by Edward Jay Epstein, a veteran American journalist with a fascination for conspiracy stories:

raised a number of disturbing questions about events before and just after Strauss-Kahn's arrest in New York in May for the alleged attempted rape of a chambermaid in the Manhattan Sofitel.

Strauss-Kahn, 62, had been the front-runner to win France's presidential election next year in a contest against Sarkozy. The scandal forced him to drop out of the race.

He later successfully argued in court that he had consensual sex with Nafissatou Diallo, a 32-year-old Guinean woman.

Epstein's article suggests that hours before Strauss-Kahn's arrest, a friend had warned him that his BlackBerry had been hacked and personal email compromised, and links Sarkozy's ruling UMP (Union pour un Mouvement Populaire) party.

Club DSK, a Strauss-Kahn support group, has reportedly dubbed it "BlackBerry Gate" and called for a parliamentary inquiry.

However, on Monday denied involvement, dismissing claims of a plot as "fantasy" and "grotesque," according to the Daily Telegraph.

Olympus is embroiled in an apparent corruption scandal. How about covering corporate culture in Japan....

Check the membership site in early-December for a link to completed piece.

UMP leader Jean-Francois Cope said his party had never attempted to spy on or trap Strauss-Kahn, The Independent reported.

Meanwhile, the French press has reportedly all but ignored the article — Le Monde on Monday did not even mention it, noted The Economist.

The Daily Telegraph writes that if Strauss-Kahn and Sinclair were concerned over the set-up claims, they didn't show it Monday night.

The former International Monetary Fund chief and his wife Anne Sinclair stepped out to mark their anniversary with a romantic dinner.

The couple did not appear to have a care in the world as they strolled the streets of Paris, looking relaxed and happy as they walked.