Protests by topless activists with the Ukrainian group FEMEN appear to be working, as it has become patently clear to Euro 2012 organizers and their government partners that football fans will not pass up the opportunity to make “sexy time” at the upcoming tournament.

Health officials in Poland are taking a particularly strong step: the Associated Press reports that, as part of the “Fair Play” campaign, 150,000 free kits with condoms and leaflets will be distributed in fan zones at Euro 2012 to warn people about the health hazards of casual sex, such as AIDS and other sexually-transmitted diseases.

The leaflets will be translated into Polish, Ukrainian, Russian, English, German and Spanish, and they’ll advise on the use of condoms. Perhaps health officials assume French and Dutch fans are already keenly aware of the risks associated with casual sex.

Ukraine, meanwhile, has admitted it can do little to stem what it expects will be a massive flow of prostitutes into the country during the tournament.

Vasyl Poshtak, head of the department on combating human trafficking with Ukraine’s Interior Ministry, said in a Reuters story that there will almost certainly be a “worsening of the criminal situation” once the tournament begins.

“Tourists are coming with money, and girls from outside Kyiv will try to be here,” he said. “We have drawn up a plan to carry out checks at hotels, night clubs, massage parlours and streets where prostitutes work … we will follow the situation,” he said.

But he added: “We will do our best, but this is like tilting at windmills.”

That the issues of safe sex and prostitution are getting this much attention can only mean that the FEMEN protests are working. The group, which most recently tried to steal the Euro 2012 trophy in a particularly sensational event, has for years now been raising the issue of women’s rights as the tournament has drawn closer.

They have held topless demonstrations aimed at drawing particular attention to the issue of prostitution. Their aim is to stop prostitution by criminalizing it. According to their Facebook page, they proposed in 2009 the introduction of criminal responsibility for use of sex industry services. 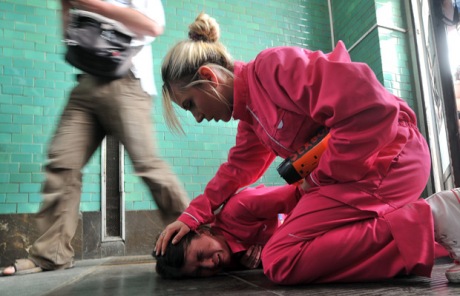 While it’s debatable how much impact the group has had on public policy, there can be no doubt that they’re having a positive impact when it comes to raising awareness of sexual health leading up to the tournament. Every time a topless protest appears in the news, people remember that Euro 2012 will be an opportunity for international visitors to gain access to a lot of sex. It’s an issue that plagues many international sporting tournaments, including the World Cup and the Olympics.

So while one can’t be sure that FEMEN will succeed in criminalizing prostitution, they certainly deserve praise for keeping the issue public enough that officials are responding. In Poland, you see a clear attempt by health officials to protect the health of both visitors and the citizenry, and you see at least a commitment by Ukrainian authorities to try and stem the flow of solicited sex.

For FEMEN, this will likely not be enough. But it’s something, and since prostitution and human trafficking are such an issue in Europe, FEMEN ought to be thanked for that.