In an attempt to bring light to Ukraine’s rampant prostitution problems, a group of feminist activists took off their tops and attempted to steal the Euro 2012 trophy. 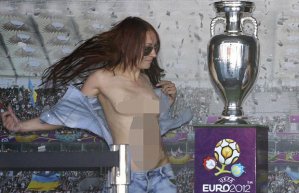 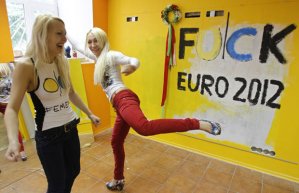 The group, known as FEMEN, is threatening to carry out similar publicity stunts throughout the tournament this summer.

Such tactics have already been many times before by this particular group. 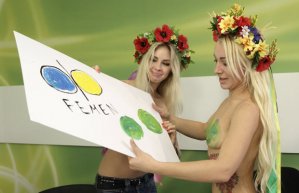 Photo: Femen activists Alexandra (L) and Inna Shevchenko display a banner with imprints of their breasts during a news conference in Vienna, March 2, 2012. 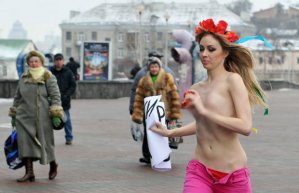 Photo: Ukrainian topless activist from the FEMEN movement runs during a protest in front of the central railway station in Kyiv on February 3, 2011. The rally was organized to mark the first anniversary of Viktor Yanukovych’s presidency. 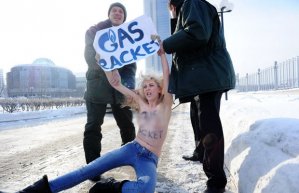 Photo: An activists of the Ukrainian women’s movement FEMEN braves the cold (-22 C, but due to high humidity and wind, weather experts said it would feel more like -31 C) and resists the guards in front of the Russiaâ€™s natural gas monopoly giant Gazprom headquarters in central Moscow, on February 13, 2012, during their topless protest.