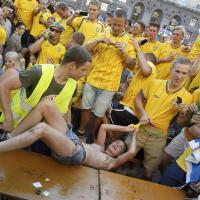 Swedish fans initially mistook a women's rights protest
for a spontaneous striptease when the Ukrainian Femen group
staged a bare-breasted table-top demonstration against Euro
2012 in the capital Kyiv.

But the whoops of delight turned to booing when Femen
activists held up placards denouncing the European soccer
championship and kicked Swedish fans' beer off tables in
Kyiv's fan zone.

The group, which carries out topless protests to highlight
the growth of the sex industry in Ukraine, has targeted Euro
2012, which Ukraine is co-hosting with Poland and which it
says feeds sex tourism.

In a statement, the group said one protest was successfully
carried out on Tuesday in Kyiv, but two other activists were
quickly spotted and detained by police.

"The most recognisable activists, Alexandra Shevchenko and
Inna Shevchenko, were seized in the vicinity, pushed out of
the fan zone and badly beaten," the statement said.

But Femen activist Oksana Sachko climbed on to a table and
danced with Swedish soccer supporters massed in blazing
sunshine for the start of their team's Group D match against
France which was to be televised on big screens.

There were initially whoops of delight from fans when Sachko,
a 25-year-old icon painter and one of the group's main
activists, took off her khaki T-shirt.

But when she revealed the words "F*** Euro 2012" written
across her torso and held up a placard with the same slogan
they began to boo and jeer.

When a fan grabbed her by the arm, she lost balance and fell
to the ground. Ukrainian security volunteers finally managed
to carry her out of the zone and she was taken off by police.

"To be honest, if you see the guys here, if the girls show
off topless it will just get positive attention. I am not
really sure that they (Femen) got their message through,"
said one Swedish fan Christian.

"I think there may be some guys here who were just happy to
see the topless girls and I don't think that was the
intention by the girls," he said.

"The activists of Femen carried out a protest against the
low-life fans in the fan zone of the Swedish national side.
The activists climbed on to tables and began to kick away the
cans of beer with which UEFA has generously lubricated the
throats of football fanatics," the Femen statement said.

Ahead of Euro 2012, which began in Poland on June 8 and will
end with a final in Kyiv on July 1, the Femen group
threatened a wave of actions to disrupt the tournament.

Its activists made two attempts to seize the tournament's
Henri Delaunay trophy when it was on public display in
various towns of Ukraine before the tournament opened.