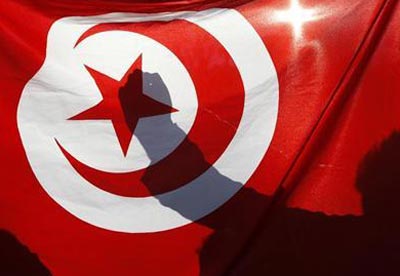 TUNIS: Three European women with radical activist group Femen, who were arrested after baring their breasts in Tunis, will be tried next week for public indecency and could be jailed, their lawyer said on Friday.

"They will appear in court in Tunis on June 5 The trial will be an open hearing," Souheib Bahri told AFP, information confirmed by French consular officials in Tunis.

They will be tried for "public indecency" and an "attack on public morals," crimes both punishable by six months in jail in socially conservative Tunisia, where the coalition government is headed by an Islamic party.

They risk another 15 days in detention for offences against the Tunisian authorities.

The three young women were identified by the Femen movement in Paris as Pauline Hillier and Marguerite Stern, both French, and Josephine Markmann from Germany.

They were arrested on Wednesday as they held a topless protest outside the central courthouse in Tunis, the first such protest organised by radical feminist group in the Arab world.

Their demonstration was held to demand the release of Amina Sboui, an 18-year-old Tunisian activist with their group who was detained earlier this month after protesting against Tunisia's main Salafist group and painting the word "Femen" on a wall near a cemetery in Kairouan.

The hardline Salafist had planned to hold their annual congress in the historic city south of Tunis, which is considered the country's religious capital, despite a government ban.

Sboui, better known by her pseudonym Tyler, went on trial on Wednesday for illegal possession of pepper spray for which she received a fine amid tensions outside the court, where dozens of angry Islamists demonstrated against the topless protests.

The judge ordered that she be remanded in custody, to face separate charges next week of indecency and desecrating a cemetery, crimes punishable respectively by six months and two years in jail.

But he left the door open for heavier sentences, referring to the "criminal conspiracy" section of the penal code and indicating that she could be accused of acting as part of an organised gang.

Sboui sparked a scandal in March and also a wave of international support after posting topless pictures of herself on Facebook, drawing threats from Tunisia's radical Islamists.

Her mother, whom the young woman accused of holding her in captivity, later described her daughter as someone who suffers from chronic depression.

Since the revolution that ousted Zine El Abidine Ben Ali in January 2011, hardline Islamic repressed under the dictator have become increasingly assertive in Tunisia, and have been blamed for numerous attacks on targets perceived as un-Islamic.

Tunisia has the most liberal laws in the Arab world on women's rights, but opposition parties and feminist groups have frequently accused the ruling Islamist party Ennahda of seeking to roll them back.

Sboui's trial has reflected the bristling tensions over the issue.

Ennahda has opposed enshrining Islamic sharia law into the constitution, but a failed attempt last year to introduce the concept of gender "complementarity" rather than equality into the draft charter raised serious doubts about the Islamist party's real intentions.

The Femen movement, founded in Ukraine and now based in Paris, has flourished since 2010, with feminists around the world stripping off their bras in protest over a wide range of issues.