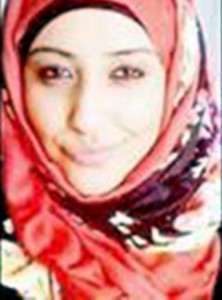 Sofia Ahmed is a student of international relations, based in Manchester, UK. Joined by her friends, she led a campaign on the social media against the so called “Topless Jihad Day” organised on April 4th by a Ukraine-based women’s rights group called. In response to the call of Femen to women across the globe to protest topless and revolt against their morals and religion in support of a Tunisian member of their group, Pride Muslimah campaign organised by the Manchester-based group of Muslim students declared the 4th of April as the Pride Muslimah Day; and invited Hijaabi, Niqaabi as well as non-Hijaabi Muslim women from all over the world to give a shut up call to the imperialist agenda disguised by Femen as feminism; and to post pictures of themselves on the social media with messages of solidarity with women who want to cover up, in order to let everyone know that Muslim women are not oppressed and that Hijaab is their right and personal choice and freedom. The aim of the campaign was to reclaim the voice of the Muslim women, which Femen tried to steal; and to let the world know that they are not oppressed and do not need help from outside but are capable of solving their problems by themselves because they were fed up of being told what to do and how to live by the West that continually tried to impose.its own values upon the whole world.

Below is an exclusive interview given by Sofia Ahmad to PKKH.tv, taken by our correspondent Gareebah:

This is Ghareebah from PKKH.tv. We have been closely following your Muslimah Pride Campaign on Facebook and Twitter, which was an effective and loud response to the Topless Havoc created by Femen. It’s amazing how a group of young Muslimahs have made such a strong voice all over the world. My first question would be,

1) What were the elements that urged you to stand up so strongly for this cause against Femen?

We felt the strong need to get our voices heard. FEMEN does not represent Muslim women, yet they were always speaking on our behalf. The racist and Islamophobic way in which the so called ‘plight’ of the Muslim woman was being depicted, demanded that as Muslims we take a stand and let our voices be heard.

2) What exactly would you say are your ideological differences with Femen and particularly with their ‘Topless Campaign’?


We are anti-racist. They perpetuate racist and Islamophobic stereotypes.

We are anti-Imperialist. They are gender imperialists that want to enforce their own norms and values on us.

We are anti-war. They provide war-mongers the ideological foregrounding that  they need in order to carry on with the perpetual state of warfare against Muslim countries.

We are feminists that understand the need for an inter-sectional approach to Feminism. They, on the other hand, are Western feminists that hold true to the idea that the West knows best and that their feminism is the right feminism and can be applied universally.

3) When Femen is liberating you and standing up for you and your rights, don’t you think you must be grateful? Because after all, the Eastern woman does need a little liberty?

Femen are doing anything but liberating us. They are doing the opposite. Their tactics are further demonising and ‘othering’ muslim women. The rhetoric and imagery that they use is Islamophobic and racist and is feeding the hostility towards Muslim women in the West. In the UK, the rise in anti-Muslim attacks is shocking, ; recent statistics show that the majority of the victims of violent attacks are women who openly identify as Muslim by wearing the Hijaab or Nikaab. FEMEN’S campaign will only work towards perpetuating this problem.

4) Why does it offend you so much, ; can you not let them do their thing, for those women who might be in need of their help?


They are not actually doing anything to help. Stripping down naked in Western countries is not going to change anything for Muslim women in Muslim countries. If they want to help Muslim women, they can start by getting Western governments to stop waging aggressive wars against Muslim countries, they can lobby their governments and stop them from supporting and propping up corrupt and misogynistic regimes such as Saudi Arabia. They can get their countries to stop providing monetary and military aid to Israel which systematically oppresses Muslim women every day. Taking their tops off in Paris isn’t helping anyone.

5) What would you suggest as an alternative way to liberate and empower oppressed women of the Muslim society?

Liberation needs to come from within. Muslim women are not ’slaves’ as FEMEN like to depict them. They are aware of the patriarchy and misogyny that exists in their societies and are capable of fighting against it. Many countries across the Muslim world have their own feminist movements that have come out against FEMEN and have suggested that their actions are hindering progress.
.

6) Feman says that ”no matter what you write on your posters, your eyes speak for you and scream for help!” What do you have to say for this?

We say, take a look again at our campaign placards and posters. These are images of strong, beautiful, empowered women taking a stand for what they believe in. The idea that Femen still refuses to believe that we, as Muslim women, are able to voice our own opinions, despite such a widespread campaign, just further goes to show how narrow minded their “feminist” agenda really is.

7) What do Freedom and Liberty literally mean according to you?
That’s such a big question, and it could be answered in many different ways. As Muslim women, of course for us the first thing that comes to mind is our religion. We know that patriarchy and white supremacy is not going to be dismantled overnight, but regardless of the systems in place, we know  that our worth comes from following the Deen and our relationship with God. As long as that comes first, we feel confident in all we do. That is where Femen have got it wrong- they are trying to take away something from us that is very precious. To us, that is not liberty at all.

What do you think “Morals” have to do with a basic human life? Do you consider Muslim morals to be superior to Western morals and why?
It is interesting that this question has been phrased creating a dichotomous relationship between the Muslims and the West. In fact, the movement itself began by Muslims who were born and brought up in the West. Does this not show that there can be a synonymous relationship between the two?
Morals play a fundamental role in human life, it shapes everything we do and every decision we make. Ultimately, morals stem from religion, so that is not to say that Muslim morals are superior to others and essentially they all have roots in the same place.

9) Are you not by your actions trying to delimit the Muslim woman from being a part of the global human society?
We think our actions are actually encouraging Muslim women across the globe to participate in a wider society by encouraging them to ensure that their voices are heard. Since the start of this campaign, we have had support and involvement from women all across the globe. This speaks volumes in showing how active Muslim women are when it comes to speaking for themselves. We do not need to be told how, or in which way, or how we have to be dressed, in order to participate in this global society.

10) How do you think women can be powerful in spite of their “limits”?
Limits are placed on Muslim women, not by religion, but by patriarchy. We can be powerful by fighting these limits with the bonds of sisterhood and brotherhood, and by fighting cultural imperialism and by coming to a mutual understanding. A woman imposing her ideas on how another woman should be “free” is just as negative in its impact  as a man forcing his misogynistic limitations on a woman.

11) Don’t you think Muslims by themselves played an important role by avoiding such norms and abondoning them??
There has to be more done to take a stand against Femen’s brand of colonial “feminism.” It’s great that Muslim women have started to speak up more against it, and the reception – negative and positive – to this campaign, demonstrates just what an impact we can have on how people see us. THis isn’t the end, though. If we want to bust stereotypes for good, and create an intersectional feminism, then we still have a lot of work to do. This is not the end of our plans.
12) What is your message for FEMEN and the  Liberals and Secualrs amongst Muslims?
How would you describe a “liberal” Muslim, though? Again, this phrase is reflective of a dichotomy that doesn’t seem to allow for an inter-sectional approach to progression and feminism. Our message to FEMEN remains the same: we do not need to be saved or liberated by a feminist group which is extremely narrow minded in its scope and does not allow for cultural sensitivity. We have a mind and a voice and we do not need to strip to nudity in order to get that voice across. We, as Muslim women, will speak for ourselves, thank you very much.

Ghareebah is doing her MA in English, a passionate Indian Muslimah, searching for the higher truths.