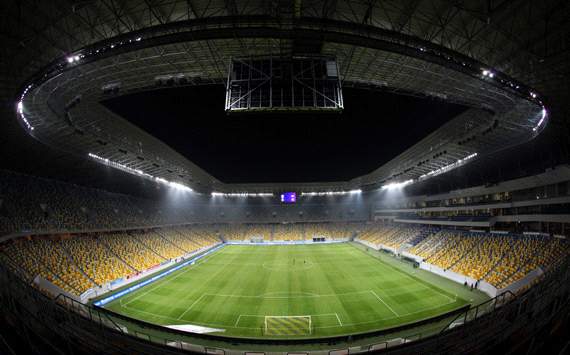 The start of a football festival is less than a fortnight away, but as the glitterati of the game prepare to descend on Poland and Ukraine for the beginning of Euro 2012, the atmosphere from Gdansk to Donetsk is anything but a carnival.

For the locals, excitement has been replaced by antipathy, bitterness and hostility. Concerns over sex trafficking, protests against Yulia Tymoshenko’s imprisonment, and questions about the long-term value of investment in infrastructure has cast a cloud of uncertainty over the tournament.

So intense is the Euro-anxiety that a recent poll from Poland’s Centre of Research on Public Opinion revealed that just 48 per cent of the population is happy with the competition being staged in their country.

“From the beginning, groups of football fans [in Poland] declared that the Euro is ‘not their party’ and they are not interested in it,” Dr Renata Wloch, chair of the sociology department at Warsaw University, told Goal.com.

“For a while now fans have been meeting and organising on the internet, planning demonstrations and voicing their concerns.”

According to Wloch, public servants were too desperate to convince Uefa to accept Poland and Ukraine’s joint bid and failed to foresee the negative consequences of their actions: chiefly, sky-high costs of infrastructure enhancement and sweeping tax exemptions.

“The Polish government, when entering into the bid process with Ukraine, did not consider and view all of their guarantees. The decision-makers did not believe we would get the right to host the Euro,” she explained. “So they just signed whatever there was to sign, without giving it much thought.”

In Poland, where the average net salary is just over €400 [£320] per month, many feel that heavy investment in state-of-the-art stadiums is a frivolous expense given the country’s relatively modest standard of living.

Wloch added: “There are doubts concerning the efficacy of the spending concerning stadiums, which were very expensive, as well as the cost of maintaining the arenas in the future.”

"For a while now fans have been meeting and organising on the internet, planning demonstrations and voicing their concerns"

Euro 2012 will be unlike any event that Poland has ever hosted: the investment, which has exceeded €20 billion [£16bn], is unprecedented for this country. As a result, Wloch feels that locals will be apprehensive ahead of the big kick-off.

“The Poles have no experience with such mass events and are bracing themselves for the arrival of hundreds of thousands of tourists,” she continued. “Generally, there is an atmosphere of moderate anticipation.”

Even among the nation’s football fraternity, the mood is not one of eagerness. One dissenting supporter, who preferred to remain anonymous, revealed that, during the final day of the Polish domestic season, fans in the stands staged a protest against the summer tournament and the financially-driven nature of the modern game.

He said: “In the last round of the Polish Extraklasa, fans from all teams agreed to present banners with the same strong, clear message: ‘Against mod€rn football. F*** Euro 2012.'"

Local football fans are not the only naysayers. Many activists have joined together in an attempt to ensure their grievances are heard. In particular, Ukrainian organisation FEMEN has made headlines for its controversial protests.

Founded in 2008 by students in Kyiv, FEMEN has made it its mission to combat the city’s rampant human trafficking and prostitution problem.

The year before the group’s creation, more than 23 million foreigners visited the Ukrainian capital, a 22% increase on the previous year, with the rise attributed to the growing sex industry. Indeed, four years ago, police estimated that as many as 12,000 prostitutes worked in the country as a whole.

Never ones to shy away from controversy, FEMEN first shot to prominence as a result of their topless protests against sex tourism. In May alone, activists twice failed in attempts to snatch the Euro 2012 trophy.

And while she refused to reveal exact details of her plans, leader Anna Hutsol has pledged that her army of more than 300 will make its collective voice heard during the tournament, both in Ukraine and in Poland.

The group only recently declared itself “neo-feminist,” and is widely denounced by the feminist community and Ukrainian academics.

“FEMEN is more an example of scandalous celebrities than of intellectual and critical social activism,” said Oleg Demkiv, associate professor of sociology at Lviv University.

However, sex trafficking is not the only gripe that feminists in Eastern Europe have against the upcoming tournament. Many are opposed to the financial and cultural investment in an event that they feel will be only appreciated by half the population.

"In terms of gender, Euro 2012 keeps celebrating superiority of men’s [versus women’s] football and overall gender disparity in sport"

“One of the most prominent Polish feminists, Kazimiera Szczuka, declared that the Euro is ‘pure male entertainment’ in which no women would take part,” Wloch revealed.

Tetyana Bureychak, associate professor of Sociology at Lviv University, explained that the FEMEN protests and opposition from Szczuka are intimately related.

“In terms of gender, Euro 2012 keeps celebrating superiority of men’s [versus women’s] football and overall gender disparity in sport,” she said. “It channels the local budgets into commercial tourist-related industries instead of welfare and socially responsible projects, and it promotes sex tourism in Ukraine.

“I absolutely share these concerns and believe that social and gender responsibility in the organisation of such big tournaments has to be taken more seriously by all parties involved.”

Beyond the protests directly against Euro 2012, the ongoing political turmoil will certainly have its impact on the tournament, with Yulia Tymoshenko’s imprisonment taking centre stage.

The leader of the Orange Revolution, a party at odds with current President Viktor Yanukovych, Tymoshenko was jailed for abuse of power last year following a trial that many have deemed politically motivated.

Despite the controversial nature of the trial and Tymoshenko’s imprisonment, according to Demkiv, in Ukraine “authorities are not responsive”.

He added: “The case of Tymoshenko probably is one of the best illustrations – numerous representatives of political opposition, religious communities and civil society gave interviews, signed petitions and held rallies to stop the repression of former members of the cabinet.”

Despite the uproar and outrage, Tymoshenko remains in jail, amid reports that she was beaten by guards. “It is more a political vendetta case than a case of imposing justice,” Demkiv concluded.

Tymoshenko's supporters have long been camped in Kyiv and, along with ultras from numerous fan groups, have vowed to make their voices heard when the cameras begin to roll next week.

Even foreign politicians have begun to make statements, with German chancellor Angela Merkel threatening to boycott the tournament until Tymoshenko is given better treatment. As it stands, Euro 2012 could be as much a political summit as it is a football event.

Regardless of political pressure, general apathy and concerns of the threat of hooliganism, European football will take a step into the unknown when the tournament kicks off in Warsaw on June 8.

Most fans across the continent will prefer to concentrate on football matters from the comfort of their living rooms thousands of miles away, but the heat of the action on the pitch is certain to be rivalled by events off it this summer – it promises to be a fascinating event in more ways than one.

On Tuesday Goal.com continues its pre-tournament build-up with a look at how a series of ticketing mix-ups and defunct stadia has undermined Uefa.