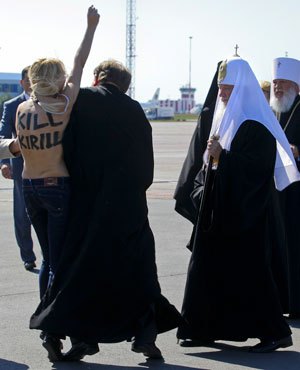 Kyiv - A leading male activist with Ukrainian feminist rights movement Femen was beaten up in a brutal nighttime attack, the group said on Thursday, blaming the Ukrainian and Russian special services.

The group described the attack as an act of intimidation ahead of a visit to Ukraine by Russian President Vladimir Putin later this week for an Orthodox religious anniversary for which its activists had been planning protests.

Viktor Svyatskiy was hospitalised with severe bruising to his face, a suspected broken jaw, broken teeth and loss of blood in the assault late on Wednesday in central Kyiv, Femen said in a statement.

'Tell them that they will be next'

The Femen statement described Svyatskiy as a "political consultant" working with the group, while Ukrainian media said he was one of their ideologues.

Anna Hutsol, one of the leaders of Femen, told AFP that Svyatskiy works at the group as "our political consultant, he explains to us the current political situation, gives support on ideological points".

"We invited him to help us to organise some projects a few days before Putin's visit," she said.

Hutsol said that Svyatskiy was beaten by two unknown people, one of them shouting: "Tell them [Femen's female activists] that they will be next!"

President Putin is due in Ukraine at the weekend to meet his counterpart Viktor Yanukovych and attend ceremonies marking the 1 025th anniversary of the Christianisation of ancient Russia.

Putin is expected to be joined by Russian Orthodox Patriarch Kirill, who was targeted last year in a bare-breasted protest when he arrived at Kyiv airport to visit Ukraine.

Also expected is Belarussian President Alexander Lukashenko, whose crackdown on the opposition at home has also been the target of Femen protests.

Putin was also met with a bare-breasted Femen protest when he visited a trade fair in Germany in April alongside German Chancellor Angela Merkel.

The Femen statement described Putin, Patriarch Kirill and Lukashenko as "long-standing enemies" of the group and said that the attack appeared aimed at stopping them holding protests over their visits.

It said that police on the scene had described the beating as "the work of professionals, with the aim of intimidating" rather than random violence.

The attack on Svyatskiy has also highlighted that Femen is not a women-only organisation but has men working behind the scenes to co-ordinate and promote their exclusively female public actions.

The work of these men has only very rarely been publicised.

The Femen statement said that in recent days male workers for the group had been "constantly" followed by special services and been summoned to interviews.

It said that Hutsol and another Femen leader, Anastasia Shevchenko, had also noticed being followed.

Describing the attack as an "assassination attempt", it said the assault was an "act of intimidation by a bandit state ahead of the holy gathering of post-Soviet dictators".