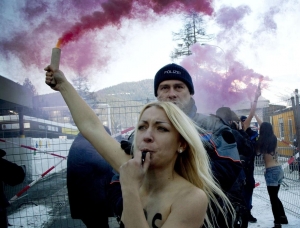 Three women from the feminist activist group Femen have protested this Saturday against male domination over the economy of the entire world and against sexism by ripping off their shirts.

The women showed their anger by force as they tried to make their way into a Swiss Resort where many corporate elites were gathered.

The Ukrainian feminist activist group Femen is well known for its protests world-wide.  The women tried to join the elite corporate gathering meeting uninvited by scaling a fence. Their protest began with them lighting off pink flares and then showing off their naked chests. The three women from activist group Femen had the words “SOS Davos” painted on their bodies in order to call attention to poverty of women world-wide.

As it was expected the three women failed and did not manage to have the protest as planned. The Swiss Resort was the center of the World Economic Forum in Davos.  The huge security force that was policing the area took the Femen activists outside. The women kicked and screamed as they tried to fight their way in but it was all for nothing.

Davos forum critics say that political and business leaders at the World Economic gathering do not spend enough time doing concrete things to help the needy or solve the world's problems.