Four topless activists from FEMEN protested on top of the Cibeles Fountain in Madrid, Wednesday, to demand the Spanish government repeals the so-called 'gag law' which was passed through Madrid's parliament in December and came into effect on July 1. The topless activists protested at Madrid's Plaza de Cibeles, drawing attention from passing commuters as they waved flags and chanted slogans against the new law, before being escorted away from the fountain by police. Known as the 'Citizen Security Law', the new legislation includes fines of up to 600 ($635) if protests, even peaceful ones, are held without authorisation from authorities. Serious disturbances near government buildings such as parliament can be met with fines of up to 30,000 ($31,758), while unauthorised demonstrations near key infrastructure points could result in fines of up to 600,000 ($635,160). Fines are also in place for insulting anyone in uniform and for photographing or filming police officers, where they could be put in danger. 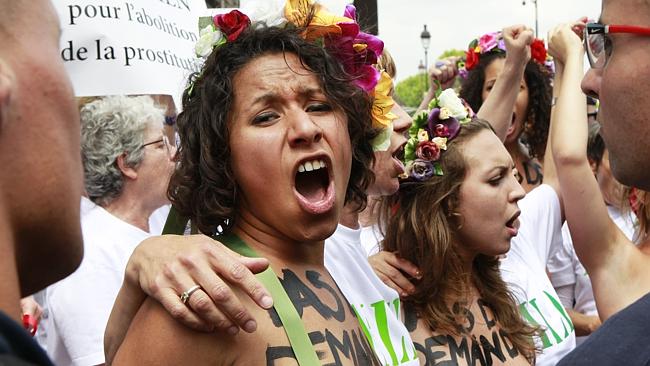 Femen activists call for the abolition of prostitution at the French National Assembly in Paris.
Source: AP


But their tactics have sparked furious debate, while stories about the group’s history, exposed by an Australian filmmaker, provoked serious doubt over its feminist credentials. A protest against a reform of Spain's abortion law at the Almudena Cathedral in Madrid.
Source: Supplied

“Women have been talking about their condition for decades now,” Femen activist Neda Topaloski told Vice. “But in reality, nothing has changed. The nature of the oppression may have changed: capitalism, consumer society, the pernicious return of religion within democracies in which state and religion are supposed to be separate. These are just reiterations of male dominance. 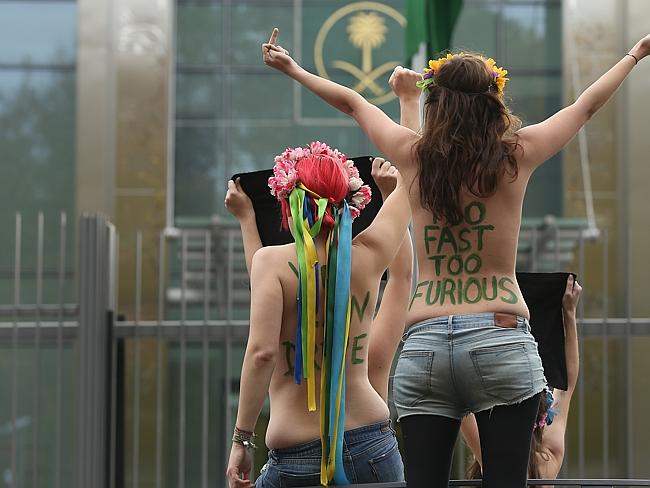 Femen members protest against the prohibition on women driving in Saudi Arabia at the Saudi embassy in Berlin.
Source: Supplied

It certainly shows that the group still has a fight on its hands.

The Femen movement was partly a reaction to the Ukraine becoming the a sex capital of Europe.