It’s been a hectic couple of days for Femen: their Paris headquarters is under siege by 300 neo-Nazis seeking revenge for the events of two weekends ago, when they interrupted a yearly nationalist gathering to commemorate Joan of Arc. And last week, they found out that Tunisian Femen activist Amina Tyler, the 19-year-old who was drugged and given a virginity test after posting topless protest pictures of herself on Facebook, might be facing up to two years and six months in jail. Her crime: spray-painting "Femen" on a wall near a mosque in Kairouan where the Salafist movement Ansar al-Sharia were gathering. 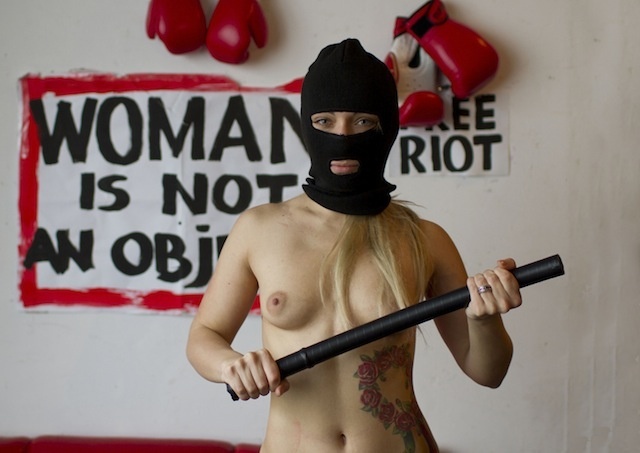 I just called up Inna Shevchenko, one of the original Ukrainian Femen who is now based in Paris, for a quick catch-up.

VICE: Hi, Inna, are you OK?
Inna Shevchenko: We’re OK. We haven’t been attacked yet, maybe they will come later, I don’t know. We’re just surrounded by police.

How did you find out that 300 neo-Nazis were heading to your HQ?
Suddenly, in the morning, we saw 16 police buses drive up, blocking the door of the theater that our HQ is in. Police came from all the surrounding streets, and put up metal fences and everything. We asked them what was going on and they told us Nazi groups were preparing an attack. Nothing has happened since. The police are still outside.

You’re having a crazy weekend.
It’s always like that.

Are all the girls with you at the HQ? It’s your weekly training today, right?
Yeah, we’re all here. The police let them through as we told them who could come in. So we did our training as usual.

Do you think they’ll just give up now, with the police there and all?
I don’t know, they’ll either give up or change the strategy. They’re angry not only because of the last action we did against them that you filmed, but also the Notre Dame action we did recently. And tomorrow there will be a big antigay demonstration here in Paris and the Nazis have announced 20 places they are going to attack, and one of those places is the Femen office. Maybe they’ll try to do something again tomorrow. But you know, I think that if they announce something, it means that nothing will happen. 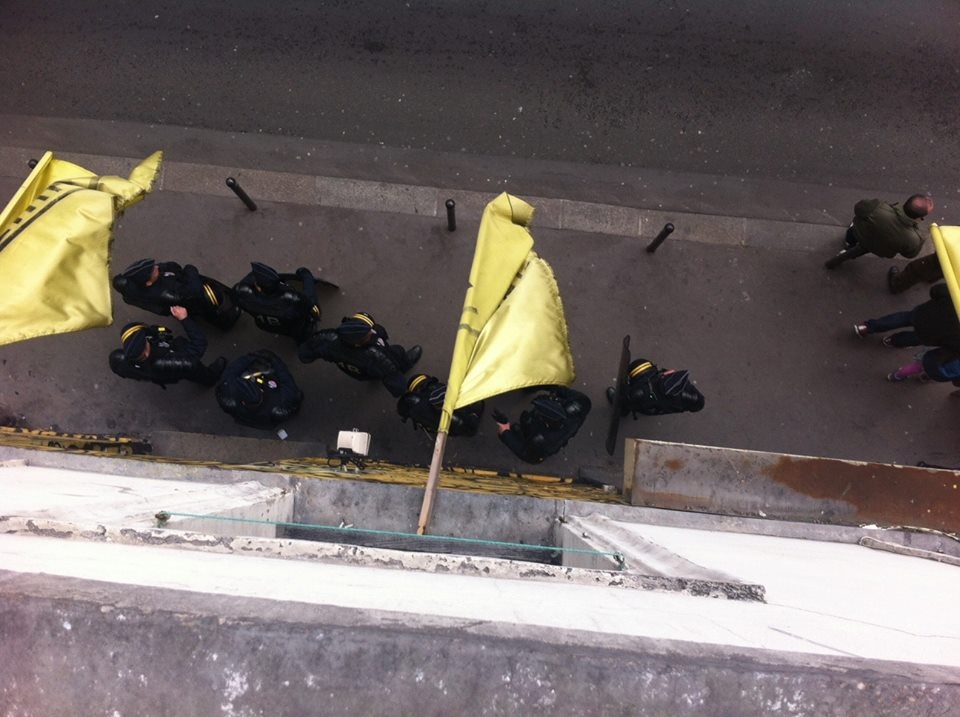 The Femen HQ in Paris, surrounded by police.

Do you consider changing the location of your HQ?
No no, we’re staying.

I guess that if they actually do something it would reflect very badly on them in the media.
Yeah. I think they understand that. Maybe they’ll come at night. Who knows. It wasn’t announced today however, and suddenly the police showed up at our door. If it’s 300 neo-Nazis that must mean they come from many different groups. I heard rumors that GUD are planning something, too.

This is a good example of what you told me the other week, that your actions provoke them to show their true faces. They try to come off as pro a safe and family-friendly France, and all it takes is a little nonviolent provocation for them to retort with violence.
Today it felt like I was in Russia or something, not in France.

I also have a few questions about Amina. Can you tell me what happened?
Amina protested against a Salafist meeting that was forbidden by the government. During their meeting she spray-painted "Femen" on a nearby wall. Of course there were police there so they took her. I’m sure that if she wasn’t arrested, she could have been killed in the square, because the Salafists were really mad. In pictures from the action we can see a woman wearing a hijab applying black paint over the word "Femen," trying to hide it. It was painted over just a few minutes after Amina was arrested on May 18th. The Tunisian Interior Ministry spokesman Mohamed Ali Aroui said, "Our society is Muslim and we do not accept this marginal behavior.” She will be kept in jail until her trial on May 30.

And she did this action all alone?
Yes. She came alone. It was not a planned Femen action.

Were you aware?
She acted on her own. She wanted to be alone. It was Amina’s act, I would say. 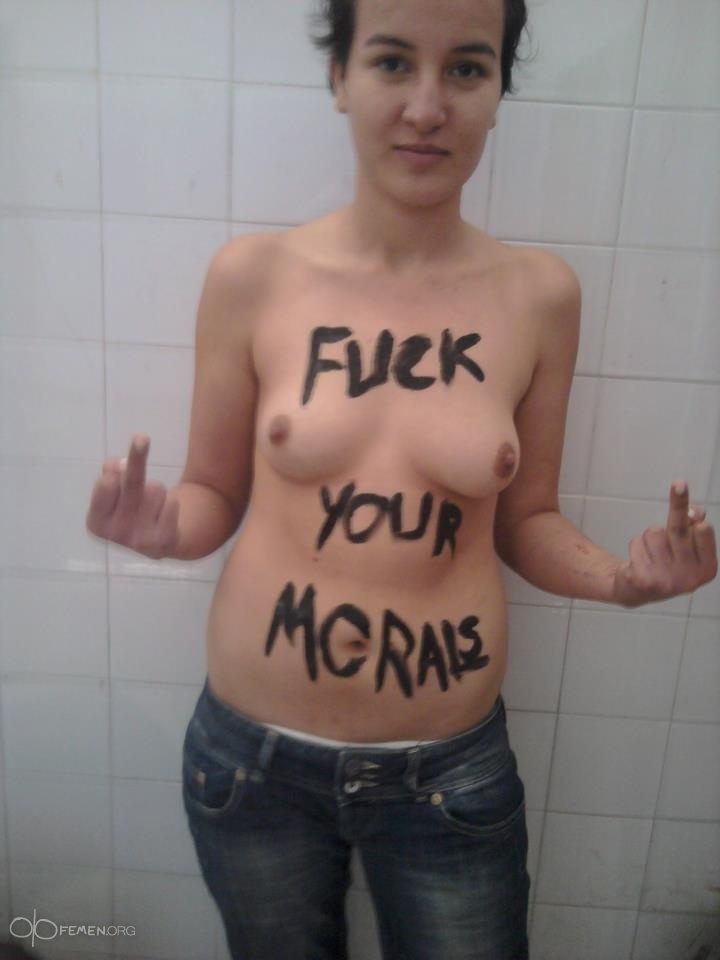 The first action Amina did was writing “my body belongs to me” on her naked body and posting a picture of it online, and that caused a lot of commotion in Tunisia. She was kidnapped and drugged by her own family…
First, after we posted the picture, she received public death threats from a Tunisian imam. After that she disappeared. And we didn’t know where she was. She disappeared for around three weeks. During this time we tried to find out where she was and what happened to her. She was kidnapped by her family and taken out of Tunis to a small village; they kept her in a house, with members of her family around her. She told me afterwards, when she escaped, that she’d been forced to read the Quran and take big doses of antistress medication so that she slept all the time. She said it was hard to remember things about what happened when she woke up. She couldn’t use the internet or communicate with anyone except for members of her family who tried to brainwash her.

How did you try to help her?
When she was kidnapped, we started an international campaign to support Amina. We called women all over the world to send their pictures in the style of Amina’s topless picture. To write a message: "Free Amina." To support her. During this campaign we got more than 1,000 pictures from many countries, including Arab countries. There were a few women who wore hijabs but they did it topless, to support Amina.

Have those pictures and the Topless Jihad Day worsened her situation in any way?
No. Once she disappeared, we didn’t know what was going on. For us it took quite a long time to find out what happened; if she had disappeared or just didn’t answer. She was in real danger because no one knew what had happened, and no one was talking about it. And once we started to scream as much as we could, once we asked for international support, the world started to make noise about it. And this is what saved her. This is our own practice, when we’re arrested or kidnapped or nearly killed. The only reason we haven’t been killed yet is because we make noise about everything, we let everyone know what’s going on with us, and this way we protect ourselves and our activists. We have only one protection: the media world and spreading information. If we kept silent about Amina, she would not have been set free. After we made noise that she got kidnapped, her family let her go. They didn’t want to give her her passport and documents, so we started to push publicly and they gave her all her documents. So Amina was free after that. I cannot agree with anyone who would say that the public campaign did something bad for Amina. It was the only way.

Have you been in contact with her since she was released?
Yes. Once she escaped from her family house, she called me. It was the same day when we did an action when we attacked the president of Tunisia to support Amina here in Paris. He was here in Paris presenting his book. And we attacked him. And a few hours after she called me and told me that she ran away from her house and explained what had happened. She wanted to let the world know that Amina is kind of free. And what happened to her.

I read in the news that after the Topless Jihad Day you held in her honor, she distanced herself from Femen?
She was very clear that she wanted to continue Femen activity in Tunisia. For us it was a question about her safety. We decided she had to leave the country for some time and prepared documents so that she could come to France. Because she still gets a lot of death threats, as well as support from Tunisian people. It was dangerous. We were thinking that she should leave. But she was very clear that she wants to continue her activity. Then she did an action, writing the word "Femen" on the wall of the Mosque.

And was arrested and will be held in jail until her trial on May 30.
Yes.

You said in a press release that you’re planning a naked rematch. What’s in the making?
Of course we have to answer and protect our activist. She can get two years in jail because she wrote a word. It’s clearly a political protest now. The Ministry woman in Tunisia says that Femen existing in Tunisia is an open provocation and she’ll do everything to stop it. I cannot tell you what we’re planning. It will be much bigger than the Topless Jihad Day. Now Amina is in real danger. She’s a big symbol of the liberation of Arab women. And she’s not giving up.

I Spent the Weekend Watching Topless Feminists Piss Off Neo-Nazis

The Egyptian Feminist Who Was Kidnapped for Posing Nude