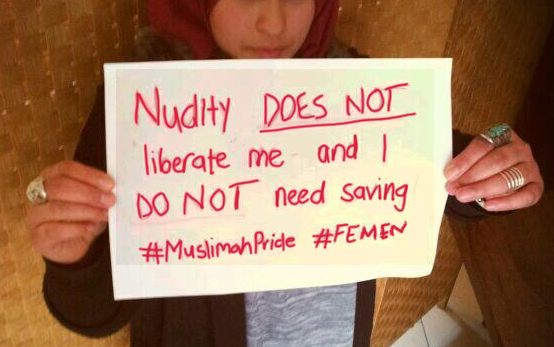 Three European members of the Ukraine-based feminist group Femen — notorious for its topless protests — returned to Europe on Thursday, after winning an appeal from a Tunisian court on convictions of indecency. The trio demonstrated topless in front of Tunisia’s Ministry of Justice last month to demand the release of a fellow Femenite, Amina Sboui, also known by her self-given pseudonym. Amina Tyler. In her quest to establish the first Tunisian branch of Femen, Sboui posted topless photos of herself on Facebook this spring, earned a fatwa from a top Tunisian cleric, and was arrested in May for public indecency for allegedly painting “Femen” on a cemetery wall.

The Femen appeal may look like a win; indeed, the trio was welcomed in Paris’ Charles de Gaulle Airport as heroes on Thursday. Whether one lauds or lambasts the activists who protested in Sboui’s defense, however, it is hard to believe they had much at stake. After all, the trio has the luxury of living in robust liberal democracies (two are from France, one is German.) And they were quick to abandon their moral stance – apologizing for their actions during the Tunis appeal hearing — only to retract the apology once on European soil.

One can’t help wondering what Sboui, and other Tunisian feminists, think of the Femen debacle. Granted, the high-profile protest won Sboui invaluable international publicity. Invaluable because while the world has closely monitored Tunisia’s growing pains post-Arab Spring, the question of women’s rights has garnered much less attention. (Least of all from the perspective of Tunisian women.) That said, Femen seems to have elicited the wrong kind of attention. Analyses of the ideological tensions at play in Tunisia have been largely superseded by sensationalist headlines, accompanied by blurred out photos of Sboui and her topless Femen partners.

And despite all the fuss, Sboui remains in jail (even as the so-called “New Amazons” gain credibility among their followers and boost Femen’s international profile.) While she may be released – in a nod to European pressures on Tunisia to reform its outdated penal code – the brief Femen interlude is shaping up to be a net loss for feminists of the small Arab nation. Namely because of the risk of confusion between Femen’s vision of feminism, and the one that exists in Tunisia. Femen protests (like its “Topless Jihad”) have been construed as Euro-centric and anti-Islam by Arab hardliners, secularists and feminists alike. Some feminist groups have accused the group of propagating a new kind of colonialism. On its Facebook page, the group Muslim Feminists Against Femen notes,

What Sboui — whose online photos boasted messages written across her body like “f**k your morals” — thinks about Femen’s rhetoric is unclear. Little is known about the specifics of Sboui’s ideology, other than that it is critical of Tunisia’s Islamist leadership. What is apparent is that her rebellion has been appropriated — for better or worse — by Femen. Her father, Mounir Sboui, commented to this effect on May 30, calling the whole affair “politicized.” Of particular concern to Tunisian feminists is that the European activists are fueling the discourse of ultra-conservative Salafist groups, and justifying attempts to equate women’s emancipation to “the permissive, debauched West.”

Ultimately, Femen looks to do Sboui’s regionally specific rebellion a disservice. (Note that this is not the first time that Femen’s agenda has overlapped with Middle Eastern feminism, drawing heated reactions.) By co-opting Sboui’s protest, the “New Amazons” have simplified a complex environment wherein some Tunisian women are embracing the opportunity to publicly embrace Islam, even as others resist the move towards conservatism. Remember: it is only after the ouster of President Ben Ali in 2011 that the country moved away from its history of secularism, threatening to curb hard-won rights for women in the process. Most alarmingly, Femen’s North African experiment has overshadowed Tunisian women’s continuing battle for gender equality in a changing landscape. Key phrase being Tunisian women.