On Monday, a first Femen protest occured in the city of Amsterdam.

Four female activists held a demonstration at the homo monument in the capital city. In support of Femen, they exposed their breasts and sayings were written on their bodies. 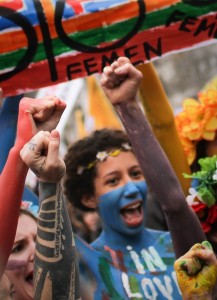 The demonstration was done in response to Vladimir Putin’s anti-gay policy and following an assault of Femen supporters and a political scientist in Ukraine last week.

Political Scientist Viktor Svyatsky was beaten near a Femen office, Mail Online reported. The attackers supposedly said “the girls will be next” once Femen protests are held during Vladimir Putin’s trip to the city.