Ever since it was created in Ukraine in 2008, the sextremist group Femen has had a problem with organized religion.

So it shouldn't come as a huge surprise that the group decided to interrupt Christmas mass somewhere in the world with another topless protest.

It took place this year at the main cathedral in Cologne, Germany.

A woman identified only as "Josephine" was arrested

It's part of Femen's ongoing efforts to highlight the Catholic Church's opposition to abortion and same-sex marriage.

Here's part of what Femen said on its website to justify its action.

Europe , wake up , you have to be an idiot to take seriously these sermons parody inquisitors. Everything smells of rot should be buried immediately! Long live woman! Long live the science!

MY PUSSY MY RULES! I AM GOD! 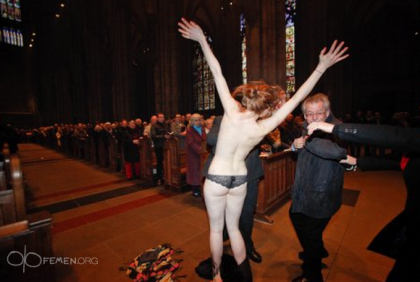