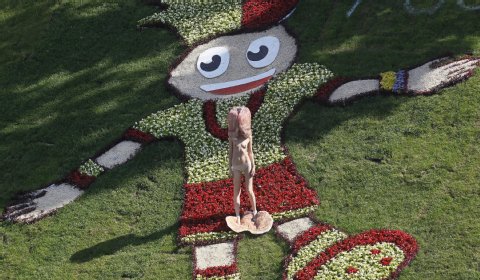 Kyiv / NationalTurk – Ukrainian security forces took activists from Femen, world’s most prominent women’s rights group as of right now, into police custody as one woman from FEMEN dressed in a costume of a penis, as they staged their latest protest in front of the EURO 2012 flower mascot Slavko in central Kyiv, Uklraine on May 31, 2012.

Femen activists were protesting against the prostitution which is feared to be raising during the upcoming UEFA Euro 2012 football tournament. Kyiv is set to host the final match of Euro 2012, where 16 European national football teams will battle for the most prized troph of European football.

FEMEN remains high profile and highly noted with their protests, yet the mainstream media coverage indicates they might be getting a bit more creative, if not ire with their methods of protests.

A couple of young topless ladies found and targeted the landscaped mascots of Euro 2012 in Kyiv. Comedy might not be FEMEN’s intention, but it was damn sure achieved.

The sight of a topless girl in a hilarious penis suit making absurd moves toward an innocent looking mascot provided laughter stock and sadly the whole point of their protest against rising prostitution and the exploitation of women in Ukraine’s sex industry went badly missing. Femen invaded Kyiv’s Independence Square where police were on hand to drag them away from images of the cartoon characters made from flower arrangements.

Femen activists recently have even grabbed the Euro 2012 trophy before having it wrestled off them by guards. The group have also vowed to focus targeting mainly English footie fans attracted by Ukraine’s alluring sex industry, a worldwide popular trade.

Protester Oleksandra Shevchenko said last week: “We know what men are like – they want a beer, to watch football and then their mind turns to sex.

“We want to make sure they get the message Ukrainian women are not their sex objects and Ukraine not their brothel.”

Sex tourism in Ukraine has sky-rocketed in recent years with seven new lap dance clubs opening in Kyiv alone ahead of the Euro 2012 due to start on 8th June.