Now that Ukrainian flash mobbers Femen have started to make regular appearances wherever cameras are guaranteed to record their presence, images like these have become almost commonplace. This time, Femen rushed an industrial fair in Hanover, Germany, where German Chancellor Angela Merkel was hosting Russian President Vladimir Putin. In a piece submitted to The Guardian, Femen leader Inna Shevchenko stated that “Our activists’ bodies represent undisguised hatred for the patriarchal order, and display the new aesthetics of a rejuvenated woman’s revolution.” Unfortunately, Femen’s “new aesthetics” look strikingly similar to the optics of patriarchy.

Femen’s tactics ensure that images depicting their protest will feature the clash of male and female bodies as security guards, police officers, and others quickly overpower the women. The pictures capture protesters’ anger but fail to convey any sense of women’s political agency. On the contrary, in the brief moments that precede their forced exit, Femen protesters treat crowds of men to a free show. The futility of Femen’s approach is underscored by this shot of a leering Putin giving one protester an enthusiastic thumbs up as the mostly male crowd looks on with bemused pleasure. Shevchenko pledges to “stop” Putin with “bare breasts alone!” by “knocking down the great oligarch and his security-service clowns, and with them, the image he has been so carefully cultivating.” Sadly, the only ones who have thus far been knocked down as a result of Femen’s protests are the protesters themselves. 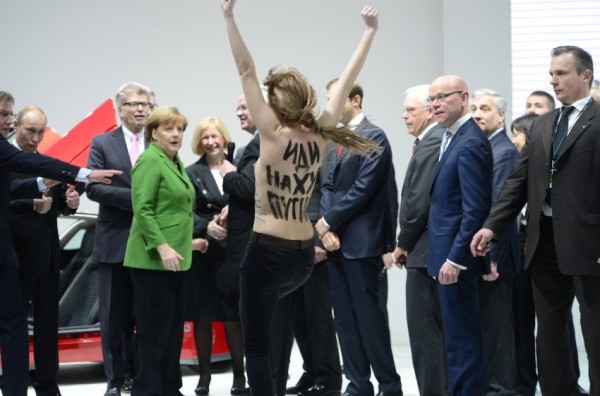 In fact, the portion of the preceding picture that is, perhaps, most resistive to patriarchy is Merkel—a female head of state and Europe’s most powerful political figure. Merkel may not be a feminist revolutionary, but she acts as an important counterargument to Femen’s claim that “women are left with little more than satisfying sexual desires as a life purpose.”

Femen’s mode of bodily protest makes more sense in the context of another of their recent protests: the “Topless Jihad” staged in support of Tunisian activist Amina Tyler. As noted by The Atlantic, Tyler “posted naked images of herself online, with the words ‘I own my body; it’s not the source of anyone’s honor’ written on her bare chest. The head of Tunisia’s ‘Commission for the Promotion of Virtue and Prevention of Vice,’ reportedly called for Tyler to be stoned to death for her putatively obscene actions, lest they lead to an epidemic.” Subsequently, Femen staged protests in Sweden, Italy, Ukraine, Belgium, and France. The Atlantic’s corresponding photo spread illustrates the complexities inherent to covering performance events in which female nudity is coupled with traditional conventions of sex appeal, male aggression, and state control. After issuing a “warning” to readers that “every photo depicts nudity, and most contain offensive language,” The Atlantic displays women strutting down the urban catwalk in Milan; being detained by police handlers in Paris, and protesting in front of a mosque in Berlin: 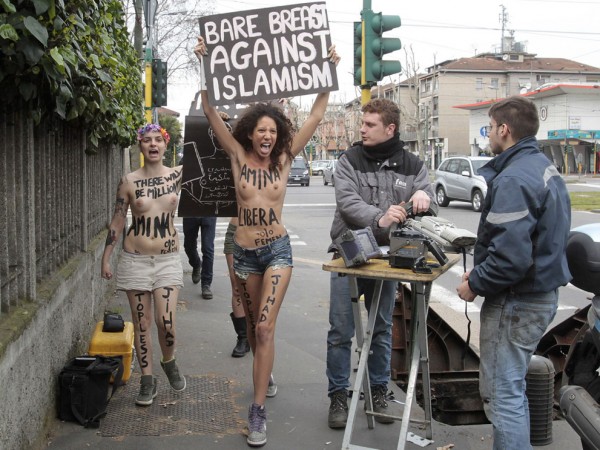 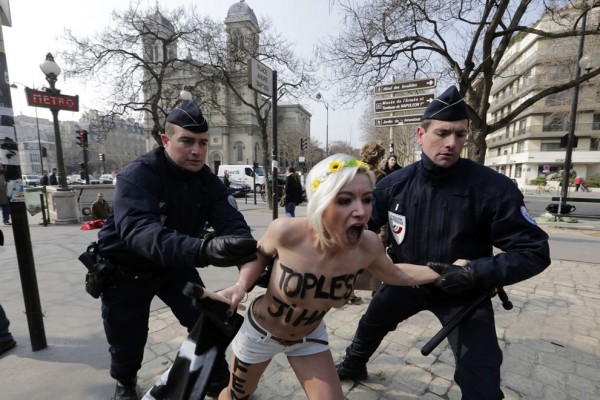 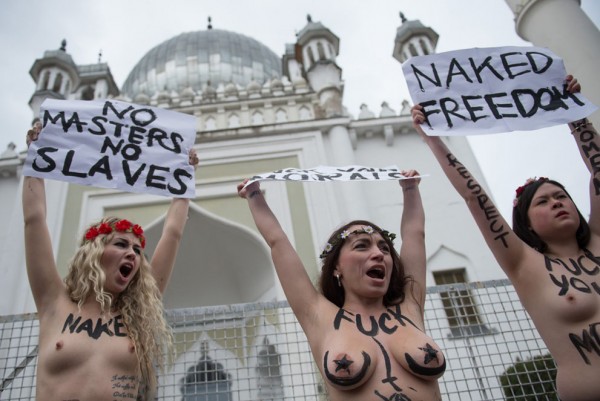 The mosque shot is particularly interesting since the photographer chose to shoot the photo from the vantage point most often used when camera operators record cheerleaders at a sporting event (they’re often holding signs, too). Of course, Femen’s brand of activism feeds, rather than challenges, this imagistic framing.

When nudity is news, how much restraint (if any) should news outlets exercise? If they refuse to show the full-bodied protest, are they engaging in journalistic veiling? On the other hand, if images like these start to dominate journalistic accounts of international gender issues, does that perpetuate the pornification of political culture?

“Femenism” may be the latest cultural response to patriarchy—but that doesn’t make it feminism.

(photo 1: Jochen Luebke / EPA caption: Security staff stop another topless demonstrator at the Volkswagen stand at the Hanover Fair.photo 2: dapd caption: Topless protesters caused a scene on Monday when they confronted Vladimir Putin during a state visit to Germany. The Russian president appeared unperturbed by the criticism, smiling and even giving two thumbs up to the bare-breasted activists, who accused him of being a dictator. German Chancellor Angela Merkel reacted with open-mouthed surprise. photo 3: Alessandro Garofalo/Reuters caption: Activists from Femen take part in a protest in front of the Consulate General of the Tunisian Republic in Milan, Italy, on April 4, 2013. photo 4: Jacky Naegelen/Reuters caption: Police officers detain a Femen activist in Paris, on April 4, 2013.photo 5: Johannes Eisele/AFP/Getty Images caption: Activists of the women’s movement Femen demonstrate in front of the Ahmadiyya-Moschee (Berlin’s oldest Mosque) in Berlin, on April 4, 2013.)