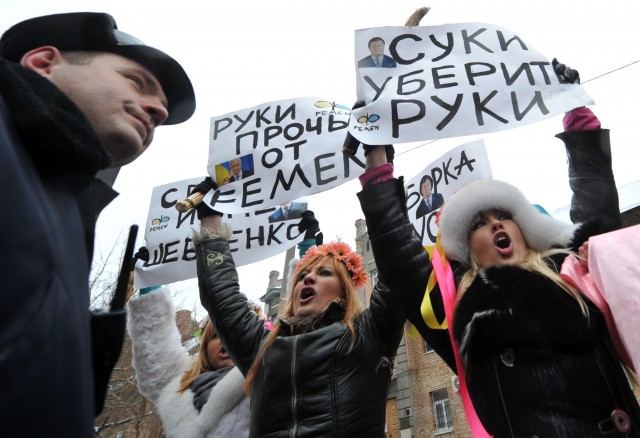 Police officers block FEMEN activists during their protest at the trial of FEMEN leader Inna Shevchenko in Kyiv on January 17, 2011.

Much has been made of the reaction to FEMEN in the Muslim world in light of the ongoing trials of Amina Sboui and other activists in Tunisia. However, France’s decision to grant asylum to a leading FEMEN activist from Ukraine on Monday should serve as a reminder that legal drama involving the radical feminist group is not limited to Tunisia and other Muslim countries.

Inna Shevchenko fled Ukraine, the birthplace of FEMEN, in August of 2012 after hacking a wooden cross with a chainsaw (while topless, of course) in protest against the prosecution of Russian punk group Pussy Riot. After receiving threats over the act — and after authorities launched a criminal case on the familiar charge of “hooliganism”– Shevchenko left for France, claiming asylum. The incident was later characterized as an act of “barbarism” by President Viktor Yanukovych who demanded a strict response from police.

While the circumstances of Shevchenko’s situation may differ from that of Sboui’s, her case makes clear that the use of religious sensibilities as a means to justify crackdowns on political protests transcends religious and cultural lines — despite what her own group has emphasized in its recent demonstrations. By granting asylum to Shevchenko, the French government has turned the spotlight back on this trend in Eastern Europe, with Pussy Riot’s prosecution offering the most vivid recent example. So while Shevchenko plans to use her platform in France to make it the new headquarters of a worldwide FEMEN movement (and to open “revolutionary schools” to train more protesters), her asylum in France should serve as a reminder to her group that it doesn’t have to look far beyond Europe to find examples of the types of religious misogyny (to borrow the groups own words) they seek to fight in Muslim countries.