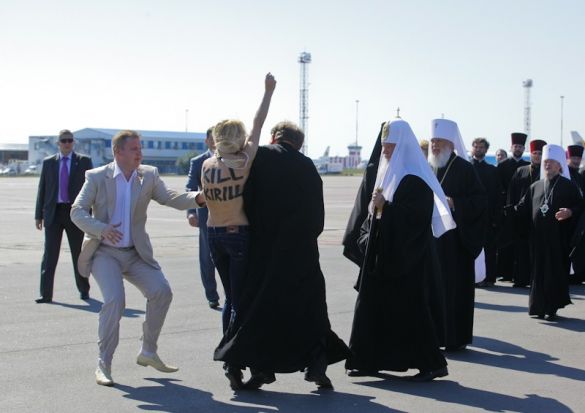 A Ukrainian court on Friday handed down a 15-day administrative sentence to a women's rights activist who bared her breasts and threw herself at Russian Orthodox Patriarch Kirill in Kyiv's Borispol Airport.

The sentenced activist, identified as Yana Zhdanova on rights group Femen's LiveJournal page, told the Interfax news agency that the court's decision was made under pressure from local officials.

"The court took this decision under the influence of Ukrainian Security Service workers and prosecutors, who were constantly in attendance during questioning and in the courtroom, threatening me with pressing criminal charges and a prison sentence," Zhdanova said.

The court ruling relates to an incident shortly after the head of the Russian Orthodox Church stepped off a business jet to begin a three-day official visit to Ukraine on Thursday morning.

Zhdanova, who screamed "Go away" and had the words "Kill Kirill" scrawled in black ink on her back, got within a few meters of a startled-looking Kirill and a delegation of clergymen before being restrained by security.

Church officials called the activist's behavior "shameful" and said it reflected "the deep spiritual crisis in certain layers of society."

Femen said in a statement on its blog that the stunt was intended to protest Russia harming Ukraine's interests by trying to drag it into a Eurasian union and Kirill encouraging the illegal detention of anti-government activists — a likely reference to the Pussy Riot band members awaiting trial in Moscow on charges of hooliganism.

The rights group has staged many topless protests in Ukraine and other countries, including at Davos, Switzerland, to coincide with the World Economic Forum.