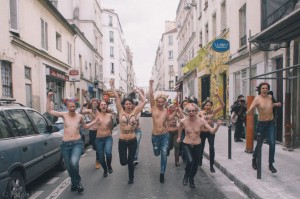 FEMEN female activists are the women with special training, physically and psychologically ready to implement the humanitarian tasks of any degree of complexity and level of provocation. FEMEN activists are ready to repressions against them and are propelled by the ideological cause alone. FEMEN is the special force of feminism, its spearhead militant unit, modern incarnation of fearless and free Amazons.