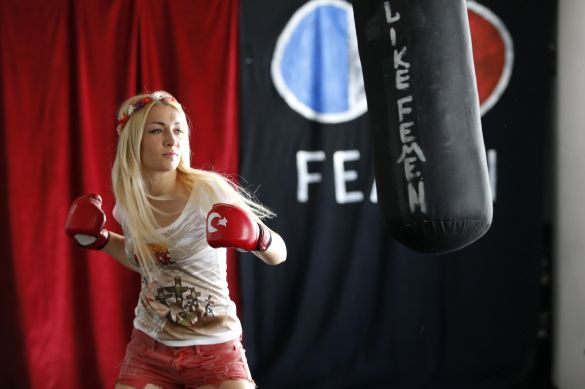 PARIS — France has granted asylum to a feminist activist who hacked down a Christian cross last year in Kyiv with a chainsaw, the Ukrainian woman said on Monday.

Inna Shevchenko sought asylum last February after receiving threats over the act last August — during which she was topless — which was meant as a protest against the prosecution of the Russian feminist punk band, Pussy Riot.

Shevchenko destroyed a four-meter-high wooden cross bearing the figure of Christ, as a Russian court prepared to rule on three Pussy Riot members for performing a political "punk prayer" at the altar of Moscow's main cathedral.

She said the French government had recognized her as a political refugee because she faced criminal charges in Ukraine. The agency that decides on asylum requests could not be reached for confirmation.

This would be the first time that a member of Femen, a group that originated in Ukraine and often stages bare-breasted protests, has been granted refugee status. Shevchenko said the decision effectively made France the main headquarters of Femen.

"It was a step to develop Femen from a national movement to a global one," she said, adding that the group planned to open "revolutionary schools" in France to train women protesters.

Femen has staged protests across Europe, mainly against Russia's detention of Pussy Riot last year. In France, they held counter-demonstrations at protests against gay marriage.

Tunisia jailed one German and two French members of the group after they staged a topless protest there in May. They have since been released.