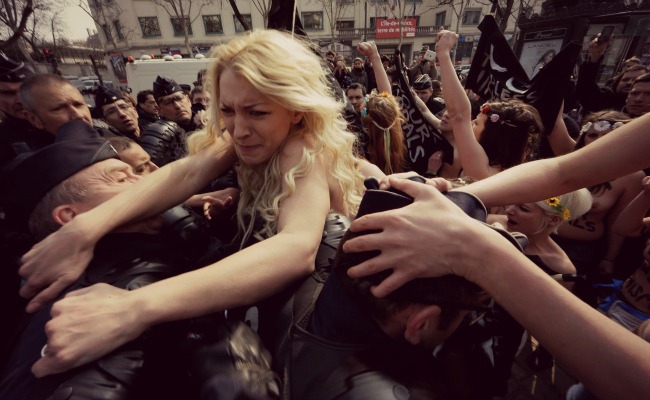 French President Francois Hollande has chosen a controversial Ukrainian feminist known for her topless protests as the new incarnation of Marianne, one of
France's national emblems, in a move that is drawing mixed reactions.

It is the first time a foreign woman has been picked to represent Marianne.

One of the stamp's creators, French artist and gay-rights activist Oliver Ciappa, confirmed on Twitter that his Marianne was based chiefly on 23-year-old
Shevchenko.

According to Ciappa and co-author David Kavena, the design is "international and timeless" and blends elements of Renaissance art, French comics, Japanese
manga, and U.S. animation from the 1950s.

It was among 15 designs preselected by a jury that included schoolchildren. 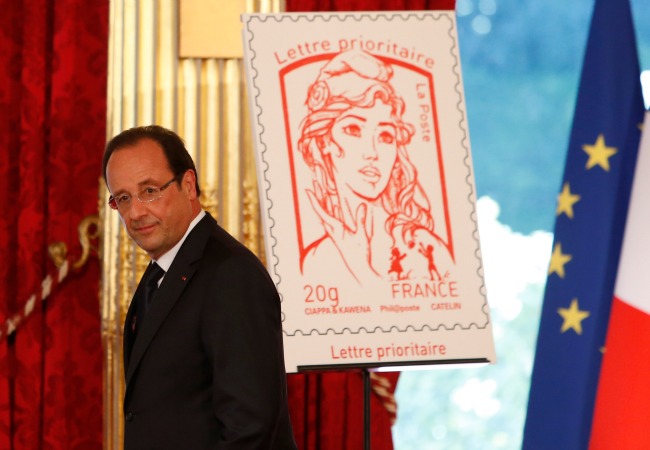 Marianne, a young woman wearing a Phrygian hat, became the symbol of the French republic shortly after the 1789 revolution.

Her profile features on France's official logo, euro coins, and stamps, and busts of Marianne adorn town halls and other official buildings across the
nation.

According to a tradition dating back to 1944, each new French president chooses a fresh illustration of Marianne to decorate stamps.

Previous models for Marianne have included famous French actresses and singers such as Brigitte Bardot, Mireille Mathieu, and Catherine Deneuve.

Shevchenko said she was grateful for the honor, which comes just a week after she was granted political asylum in France.

But the nicest part of it is that now every time a homophobe, a fascist, or an extremist in France wants to send a letter by mail, he will have to lick Femen's backside.

The flamboyant activist ran afoul of Ukrainian authorities after cutting down a cross with a chainsaw in central Kyiv, wearing only skimpy shorts, in
support of jailed members of the Russian punk feminist collective Pussy Riot.

"It was a surprise, it was completely unexpected," Shevchenko said. "It's great to enter history in this manner. But the nicest part of it is that now every time a homophobe, a fascist, or an extremist in France wants to send a letter by mail, he will have to lick Femen's backside."

Shevchenko, however, added that France's friendly gestures will not deter her group from staging further unsanctioned protests in that country.

"France welcomed Femen, France took a fancy to Femen," Shevchenko said. "In reality, there are still many enemies of women's rights and of women's freedom,
even in contemporary France. These gestures are, of course, very pleasant, they allow us to expand our activities in France, and we are grateful to this
country. But it doesn't mean Femen will end its activities here."

But Femen's provocative stunts have drawn criticism in France, too, and many locals strongly disapprove of Hollande's choice.

Religious groups and opponents of gay marriage -- fervently advocated by both Ciappa and Shevchenko and recently legalized in France -- are particularly
upset by the new stamp.

"Olivier Ciappa should have found out more about Femen before representing an important French symbol," writes one critic on Twitter.

"So the stamp's Marianne is a Femen," reads another comment. "A fine illustration of secularism according to Socialists: insulting and intolerant."

The new stamp goes on sale on July 16.