PARIS (Sputnik) — On Friday, topless activists from the Femen movement tried to prevent Le Pen from laying flowers at a Joan of Arc monument where the National Front held a rally. Their bodies were covered with anti-Le Pen slogans.

"Marine Le Pen has tasked her lawyer with filing a suit against the Femen activists over a premeditated attack at a Joan of Arc monument as well as for an encroachment on the freedom of demonstrations over the incidents on the Place de l'Opera [Opera Square]," the press release read.

Later in the day, Femen interrupted an address given by Le Pen, accusing her of ultra-nationalism.

Several minutes after Le Pen started delivering her speech, three bare-chested female activists appeared on the balcony of a neighboring house. The women had "Heil le Pen" written on their chests. 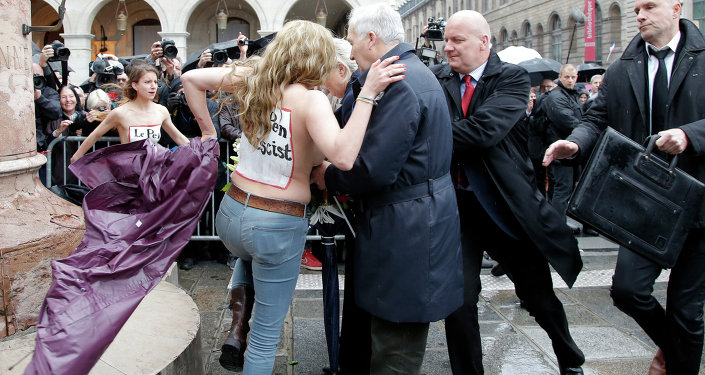 The activists held Third Reich-style flags with National Front symbols on them, performed Nazi salutes and screamed through megaphones.

Le Pen's speech was interrupted for a few minutes until security detained the activists. Shortly afterward, the National Front continued its demonstration.

Femen is a radical feminist group founded in 2008 in Ukraine and currently based in Paris. The group is notorious for its topless way of protesting on a wide range of issues, including gender, religion, homophobia and sexism, national policies and international problems.