I notice from her Twitter account that on the day she spoke to me, she went to Amsterdam's red light district to make a topless protest against the exploitation of prostitutes. A few days later, back in Paris, she was with Femen women protesting against the "dictatorship" of Ukraine's president Viktor Yanukovych by urinating on a photo of him.

There were two films featuring Shevchenko at IDFA, both likely to come out in the UK this year. Kitty Green's Ukraine Is Not a Brothel contains the revelation, reported last year, that the Femen group was masterminded in its early years by a shadowy man, Victor Svyatski, who supposedly hand-picked the prettiest girls to front the organisation. Shevchenko makes it very clear she feels this film is already out of date. Femen has long since moved on... without Svyatski. The other film, Everyday Rebellion, positions Femen within a global wave of non-violent protest groups. She much prefers this portrayal of the organisation. 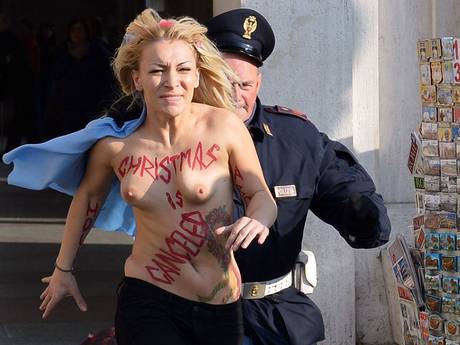 Inna Shevchenko, leader of the Ukrainian feminist protest group Femen is chased by a policeman outside Saint Peter's Square in the Vatican. Femen activists started an international topless marathon to protest against the Catholic church's views on abortion

How do you find life in Paris?

But it must have been a wrench leaving Ukraine?

Of course, I will not play the hero, saying it was fine. As a 22-year-old girl, you're not expecting to leave your country suddenly, not [to be able to] say goodbye to your relatives or your mother. On a human level, it is something you don't expect to face, especially when you are 22. Emotionally, it's hard not to be able to be in the country.

When you're doing a topless protest, do you feel fear or excitement?

Although I've done a lot of them, I feel every action is a special mission – it's a short revolution that can last for a few minutes or a few seconds sometimes. When you're preparing to cut down the cross, you're concentrating on how to do it, how to commit this act. There are a lot of emotions but if you're too emotional, you cannot do anything like this. It's like going into battle. You have to know how to keep your weapons and use them at the right moment.

What is your attitude toward Victor Svyatski? He's an intelligent guy and he's brave...

I will never deny that he is a smart person. He was the reason why we knew each other. He was one of those smart people around us at the beginning, who were more experienced. There were a few of them. He wasn't the only one. People are wondering how he could become this dominating member of the movement. I cannot say he's a brave man. He was caught in the street and beaten up but that doesn't mean he was brave. He is not brave at all! What is this bravery? To dominate girls. These were young girls and he could dominate them. I don't call it bravery.

Are you still in touch?

Me personally, not at all. Sasha [one of Femen's founder members] is sometimes in touch. They're from the same town. The reason we are not in touch is because there was a clash between the two of us. I took the movement far from him. He was trying to come back many times but the movement was far from him.

Did he send you to Belarus?

It's a little ridiculous when I hear such things. How can you imagine that we go to such a dangerous place, doing such a dangerous action, facing torture, coming back and continuing our activity, only because the guy sent us there!

What was your experience of the Orange Revolution of 2004/5?

I was 15 or 16, studying in the school in the small town where I was born in the south part of Ukraine. For me, it was a revolution that you could see everywhere. You would go out on the street and you hear people, like the neighbours you've known for 15 years of your life, talking about something they never talked about before. You look at your mother and she is watching news that she never was interested in... I believe revolution isn't physical. It's in the mind. One of the main goals in any revolution is to change the minds of people. The Orange Revolution brought completely new ideas to my society. 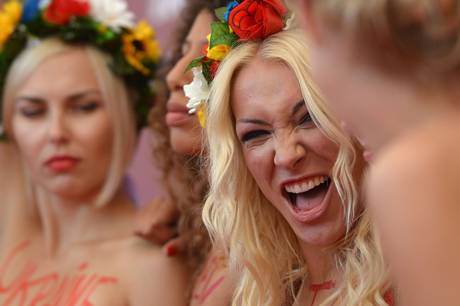 
Were you taking part in the protests?

I was born in a region that is usually pro-Russian. Directors of the schools were forcing teachers to vote for Yanukovych, who is the President. We all knew about that. I remember that I went to school with an orange stripe on my bag. I was president of the school government. When I came inside the school, I faced the director, who made a big drama. She said that school was not the place for politics.

We had a big fight. I said to her, 'If you are saying school is not the place for politics why are you telling teachers how to vote'. Since that moment, I was never shy about expressing my beliefs. This was a revolution in the teenage mind of a 15-year-old Ukrainian girl who realised you had to be part of it. Even though we faced all those disappointments and dramas after the revolution, I believe this revolution didn't fail. It planted in the minds of people thoughts and ideas.

It's a dramaturgy of gender reality in the world. It's not us who are famous. It is the idea that is famous. We are changing the way we talk to the world and act even though you think we are naked feminists. Two years ago, we were just taking off tops. Then, we started to write on our bodies, using them as a poster. Then we made these bodies act, facing Putin and Berlusconi. 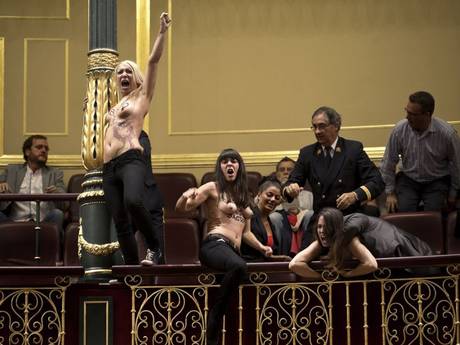 Activists from the women's movement Femen demonstrating in the Spanish parliament against the government's conservative new abortion law, with 'Abortion is Sacred' written on their bodies

You get it nearly every day. I don't want to be liked by those people who have shit in their heads. I don't care if they like me.

What were your experiences of Euro 2012 in Ukraine?

The ugly part of the country came out. Every 100 metres, there were new brothels. You just see the way Ukraine is. Those crazy fans who are interested to watch football, drink beer and fuck prostitutes were all coming. Every day you go out of your apartment, you'd see there is a new club, a new brothel. By law, prostitution is illegal in Ukraine but it is on every corner. If you go to a hotel, they give you a catalogue of girls you can use and order as if they're a bottle of champagne.

Are your family proud of you?

When we were in Copenhagen for Everyday Rebellion, there was a big conference with a lot of people. I took a picture of them and I told them, 'I am taking a picture of you because I still have to prove to my mother that her naked daughter is doing something that makes sense'. I think my father is proud of me. My mother is proud [too] but she wants me to live a different life!