Watch a video of the encounter

Xenia Chernyshova tore her shirt off and stormed a Montreal stage on Saturday, interrupting a speech from Hamadi Jebali, the former Tunisian prime minister and current secretary-general of the country’s ruling Islamist party.  Online footage shows Ms. Chernyshova shouting “Free Amina” before being knocked to the ground by angered audience members. Ms. Chernyshova — who leads the new Quebec wing of international feminist group Femen — was protesting the imprisonment of Tunisian Femen member Amina Tyler. Since 2008, Femen has gained notoriety for topless protests, notably an April incident involving Russian President Vladimir Putin. Post reporter Jake Edmiston spoke on Monday to the Ukraine-born Ms. Chernyshova, who came to Canada in 1998 at the age of 12:

How did you get onto the stage undetected?
I was actually surprised that I could get up so close.  I just waited for [Mr. Jebali] to be alone, then I jumped onto the stage, got topless and that’s it.

What was going through your head right before you climbed onto the stage?
I just knew I needed to do that. I was scared, of course. But I don’t care about that. It’s something in your belly.

Why topless?
It’s a way to actually say, “My body is mine.” It’s not like my breasts are sexual. My breasts become political. My breasts can disturb a conference, an event, a meeting. Especially when you do it in front of Islamic people, it makes them angry. It’s a way for women to actually have a voice. If I were in my clothes and just yelling stuff, nobody would pay attention to me. They’d say, “She’s hysterical.” With my breasts, maybe I’m more crazy. But it has an impact.

Let’s talk about that kind of attention. Do you worry the attention isn’t directed towards your cause, but to your tactics instead?
Of course I’ve thought about it. But in Quebec, I’m happy because nobody disapproves. They don’t talk about my body. They talk about the people I defend. I think it’s because Canada is an open-minded country. Everybody has been paying more attention to the fact that people were violent towards me.

You said your nudity can spark anger. From the YouTube video, it looks like it did. What happened after you stormed the stage?
People in the audience just jumped on the stage. They didn’t even want me to go away. They wanted to teach me a lesson. Like, ‘How could you, a woman, do something like that? Just shut up. It’s not your place.’ Their emotions spoke more than their brains, you know?

What did they do, exactly?
They pulled my hair and they were pushing me. But there were other younger Tunisian guys who also jumped on the stage and defended me. When I saw that, I felt that I didn’t need to do any crazy stuff. I didn’t need to defend myself.  I just said, ‘‘Fine, I’m going to go away.’’ For me, I don’t want to be violent and aggressive.

You were ushered off the stage and into another room. What happened next?
People were still very aggressive. They threw things at me — bags, whatever they had near them. Then I got into the room and I was safe. Actually what happened after was the former prime minister couldn’t go on. There was big tension and he couldn’t go on with his speech.

What do you think your protest achieved?
I hope people are going to talk about Amina and the three other [protesters imprisoned in Tunisia] because nobody in Quebec knew about it. It also shows that there’s some Islamist presence in Quebec. And yes, some guys can still be very violent to women in Canada. For many people in Quebec, they couldn’t believe that. We know violence is everywhere, but in front of everybody at a political conference? It was kind of a shock to many people. 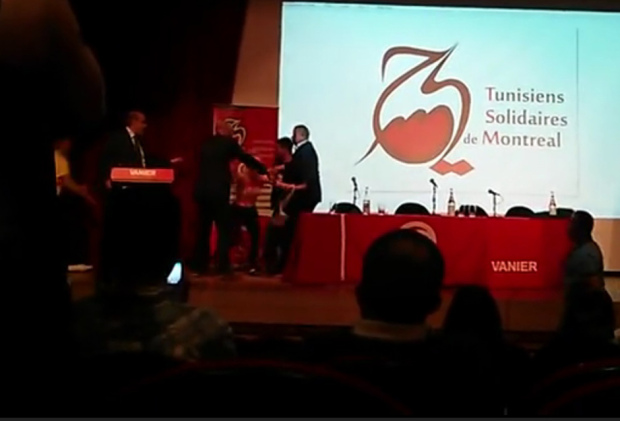 Were you expecting that kind of violence?
Yeah, that’s why I had a guy with me.

I saw him in the video, standing by the stage with his shirt off. He was swarmed as well. What exactly happened?
They punched him. He was bleeding, but not a lot. Things happened so fast and there were a lot of people there trying to stop any violence.

What’s the connection between Femen and Amina Tyler?
When she saw Femen’s actions, she decided to do the same this — protest topless. But for an Arabic woman, it’s very dangerous to do that.

You’ve said her affiliation with Femen has put Ms. Tyler in danger in Tunisia. Do you feel the continuing protests in her name are helping or hindering her situation?
I think about that a lot. But the thing is, nobody ever told her what to do. After she posted [topless photos] on Facebook, Femen wanted her to come to France. Everything was planned for her to come to France. But she decided to write “Femen” near a cemetery [and was reportedly detained and charged for holding a can of pepper spray]. But she’s not going to stop. She’s not scared. So I think our protests can help her, because without it, nobody would know.

You’ve been a topless protester since opening a Femen chapter in Montreal last year. How did you get involved with this international feminist group?
Last summer during the student protests in Montreal, there was a concern about politics more than ever. Some friends of mine would just send me links about Femen in Ukraine. And I thought, ‘‘Oh my God, there are feminists in my country.’’ So I went back to Ukraine, and we learned that [Russian feminist punk rock group] Pussy Riot were arrested. I had just met Femen and they asked me to come to the protest where [Femen organizer] Inna Shevchenko cut down a crucifix in Kyiv.

This interview has been edited for clarity and condensed.