From China’s Weiwei to the Egyptian blogger Aliaa Magda al-Mahdi, people are again busy using their naked bodies as a way to challenge authority and demand rights. Even in today’s much more sexualized world, public nudity continues to be a powerful form of protest. 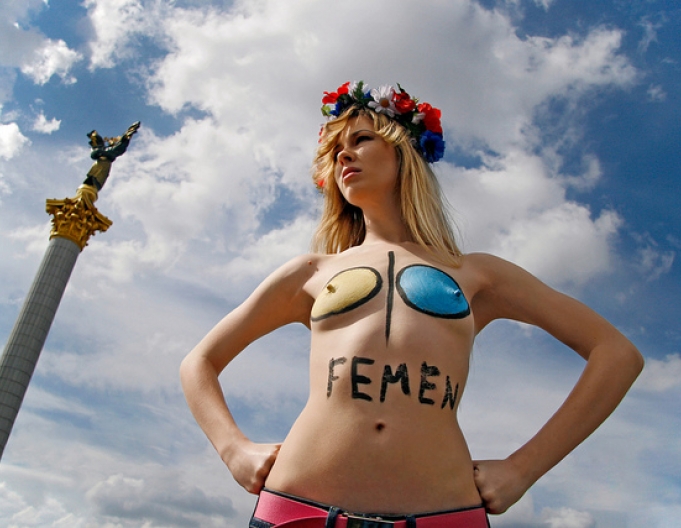 by: admin
A member of Ukraine's provocative feminist group FEMEN

BERLIN - When nearly 100  supporters of dissident Chinese artist Ai Weiwei recently bared it all on the Internet, they joined appear a sort of global renaissance of nude activism. The cyber flashers removed their clothes out of solidarity with the well-known artist, who is currently being investigated by Beijing authorities because of a photo that shows him and several women naked.

The Chinese repression apparatus is using the old photo as a pretext to accuse Weiwei of disseminating pornography – this being the latest of a series of harassments authorities are using to try and silence the stubborn critic of the regime.

Another recent case of nakedness as social protest involved an Egyptian blogger named Aliaa Magda al-Mahdi, who brought attention to herself in spectacular fashion by posting pictures of her unclothed self on the Internet. This not only attracted the rabid hate and wrath of Islamic morality guardians and extremists, it was also criticized by secular liberals participating in the Egyptian revolution movement. Holding a banner that read “Love without Limits,” some three dozen Israeli women bared their breasts publicly out of solidarity with al-Mahdi.

Topless protesting has for years been an action strategy of the Ukrainian feminist group FEMEN. The group demonstrates internationally against abuses of women’s rights. FEMEN activists, who are often young and very attractive, present themselves in a deliberately provocative way in order to draw awareness to their political and social views. Their present cause is trying to prevent the legalization of prostitution during the 2012 European Football Championship to be held in Ukraine.

An old, but still provocative technique

Stripping down as a sign of rebellion against repressive societal norms and constraints is anything but new. The only surprising thing about it is that even in our day, when nudity abounds, the technique still seems to work. Baring one’s body in public remains a taboo and is perceived as a disturbance of proper public order.

Of course, consequences for doing so vary in different social structures and parts of the world. In many Islamic countries, such a thing could doubtless warrant severe corporal punishment if not death – particularly if the person disrobing was a woman. The status of the female body is at the center of a bitter cultural war between enlightened modernity and reactionary religiosity in the Muslim world.

The male’s right to total control of the body and life of women is one of the most deeply-anchored forces of Islamic fundamentalism and its mad demand that women be shrouded in public. It’s not an accident that one of the things associated with the despised western “decadence” is the principle of female self-determination.

The courage of Egyptian blogger al-Mahdi pierced straight to the core of the political and cultural syndrome of backwardness that the Arab world -- and much of the Muslim world -- suffers from. As long as a woman is not allowed full sovereignty over herself and her body, all attempts at progress remain a cynical farce. There is the glimmer of hope that the Arabic revolutions have opened the door for change for it is no longer possible not to address the fact that the success of democracy in the region depends on the liberation of women.

Although it’s not remotely comparable to al-Mahdi’s courageous act, the American and European rebels of the 1960s also disrobed to shock what they regarded as an authoritarian and inhibited Establishment. From California’s flower children to John Lennon and Yoko Ono, anybody who wished to make a statement against societal constraints and conventions took their clothes off -- risking at most being cited for disturbance of the public order. Removing one’s clothes was a synonym for breaking out of the corset of “civilized” do’s and don’ts, but it also gave new life to a form of protest favored by earlier generations.

The flashers of the 60s were preceded by the life reform movements at the turn of 19th century. People involved in the movements saw nudity as a return to what was perceived as the essential purity of human nature. Nudism was paired with vegetarianism at the famous colony Monte Veritá in Ascona, in the Swiss-Italian canton of Ticino.

The theory of Jean-Jacques Rousseau (1712–1748), the Genevese philosopher and writer, had already been deeply etched into European cultural history. According to Rousseau there were at one time “natural humans” to whom the injustice and ugliness of modern civilization were utterly foreign and who lived on in tribal cultures. Since then the idea of a return to natural nakedness in a noble wilderness has been associated with a return to innate human goodness.

In today’s world, when Chinese dissident Ai WeiWei and his supporters appear naked, it is basically along similar lines as Rousseau’s 18th century Enlightenment message – a call to a better, democratic society. Their nudity symbolizes at once their total vulnerability to the will of the state but also the resilience of their own will. Their gesture says: my body belongs to me; nature gave this body to me -- and it is inalienable even if you take everything else away from me. Ai Weiwei’s uncovered ample self tells the powers that be: See here, this is the natural me. I’m an offense to you – and intend to remain one.

“From such crooked wood as that which man is made of nothing straight can be fashioned,” said philosopher Immanuel Kant (1724–1804). The imperfect unclothed body is thus an existential objection to totalitarianism.

The young Ukrainian FEMEN members are acting on another symbolic level. They are children of an age when female public nudity is sexualized in the service of commerce. After women’s rights activists fought for decades against the debasement of the female body as an object of lust, as seductive “goods,” these new feminists are actually donning the sex object mantle and using it as a means to express self-awareness and fighting spirit.

They perceive their sexual attractiveness as a potential weapon. If you want it, come and get it, they’re saying -- but you’re going to have to pay by accepting our social and political demands. One of their rallying cries to women is to withhold sex from men until the goal of a campaign has been achieved. The objects of desire, fully aware of their power, have the upper hand.

Read the original story in German

All rights reserved ©Worldcrunch - in partnership with Die Welt