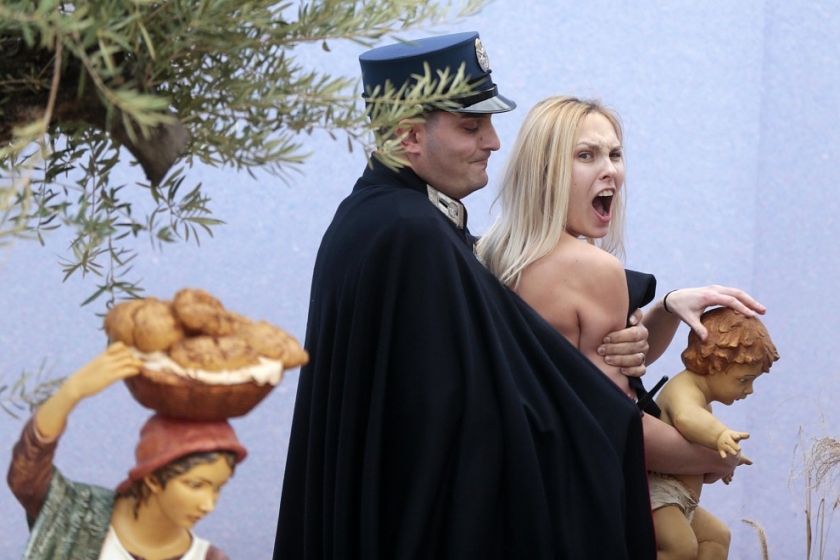 The woman, Iana Aleksandrovna Azhdanova from Ukraine, remained under arrest in a Vatican cell awaiting possible trial for “disturbing the peace, obscene acts in a public place, and theft” for storming the Vatican Nativity scene Thursday.

Respecting Femen’s provocative protest dress code, Azhdanova was bare from the waist up, but sported the message “God Is Woman” on her torso to thousands of pilgrims packed into St Peter’s Square who looked on.

Azhdanova was swiftly apprehended by Vatican police after rushing into the Nativity scene and plucking the baby Jesus figurine up while shouting what were described as anti-religious slogans.

The Vatican is apparently taking the incident very seriously.

Papal spokesman Federico Lombardi told agency AGI the Vatican is currently deciding whether to try Azhdanova on charges of “disturbing the peace, obscene acts in a public place, and theft”.

Lombardi said the religiously hostile nature of her protest “must be regarded as extremely serious due to the setting and circumstances that intentionally offend the religious sentiments of a very large number of people”.

The Vatican—which has the option of trying transgressors on its territory, or expelling them to Italian courts—is also holding Italian businessman Marcello di Finizio, who was arrested Friday for scaling the facade of St Peter’s basilica to protest a European Union directive.

Di Finizio sought to denounce an EU measure forcing Italy to put state-accorded concessions to operate businesses on beach areas up for competitive bidding by 2015, which he says threatens the survival of the resort he operates on the coast of Trieste.