Only two days after Femen movement leader Inna Shevchenko was chosen as one of the inspirations for France's new official stamp, the controversial Ukrainian activist, known for her topless protests has sparked an outcry on Twitter for a July 9 tweet where she slams the holy month of Ramadan and Islam.

The tweet in question was discovered on July 16, a day after Shevchenko was chosen as the first foreign woman to represent the incarnation of Marianne, one of France's national emblems. 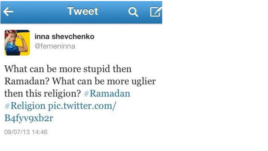 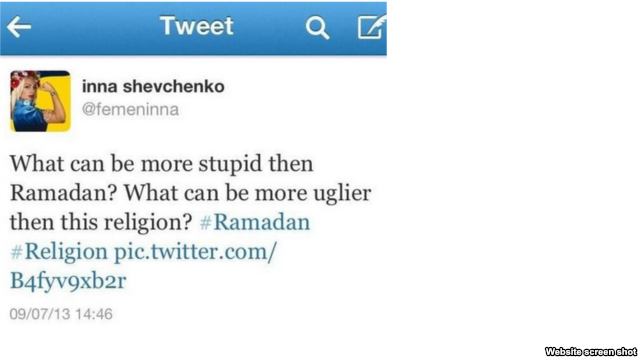 On July 16, as Shevchenko was being subjected to an onslaught of criticism from the Twitter community, the inflammatory tweet was deleted -- "by Mohamed or by mistake, that is the same," she joked on her Twitter account.

Pascal Boniface, director of the Institute of International Relations and Strategies, a French Think Tank, called the Femen's tweet racist and hypocritical.

(Full translation of the tweet: "Inna Shevchenko (Femen) posts an Islamophobic status which she then erases after outraged reactions. That says it all: Racism and hypocrisy")

The Femen activist has since explained that her tweet was written for Amina Tyler, a Tunisian feminist and member of Femen, who was arrested in May for writing "Femen" on a wall near Kairouan's main mosque.

@kaisersam The tweet is for Amina who is obliged to follow Ramadan in jail, being not Muslim. I all it stupid!

In a July 16 interview with the French daily, "Liberation," Shevchenko argued that she is not an Islamophobe but antireligion -- describing her organization as an atheist movement against all religions.

This is not the first time Femen has been caused controversy in the Muslim world. In April, the movement organized a "Topless Jihad Day." Soon after, a group of Muslim women pushed back with their own campaign called "Muslim Women Against Femen."