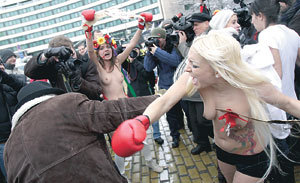 The first nude protest rally in Bulgaria has become a fact. The Ukrainian female rights activists known as FEMEN have staged a topless rally against domestic violence and human trafficking. Bitter cold and snow could not prevent the girls from taking off their clothes and the protest drew a crowd of onlookers on a freezing Saturday afternoon. The rally caused a traffic jam in the Sofia center because scores of passers-by, mainly males, stopped to take a snap while drivers stepped on the breaks on the slippery paving in front of the Parliament. Unlike the other countries where police would uncompromisingly stop FEMEN’s nude rallies the Bulgarian gendarmerie was more tolerant and let the girls put on placards reading “No to Domestic Violence!” Two of the protesters came from Ukraine, the third was a Bulgarian. The Ukrainians, who attracted global renown by staging intelligent and controversial protest actions while almost naked, say they have data that 1 in 4 Bulgarian women has been subjected to violence at home. The organization is being presented for the event with the slogan: "Their God is a Woman, their Mission is Protest, their Weapon are their Breasts!"