On a Personal Note 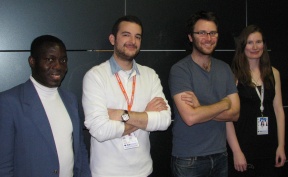 Russia Profile brings you some of the best analysis on top stories in Russia today. But there’s always more behind them. Each Friday, our writers provide their own take on the news, offering unique commentary to put events into a different perspective. This week, Tai Adelaja questions why Russia is one of the deadliest places for air travel, Dan Peleschuk ponders why relations between Russia and the United States are getting worse, and Rose Griffin wonders why women choose to strip as a way to protest election fraud.

A Wall Street Journal article this week has refocused attention on why flying in Russia is life-threatening. Unbelievable though it may sound, it is safer to use airplanes in third-world countries like Congo and Indonesia than in Russia, which is now the world's most deadly airspace, according to Ascend, a British consulting firm.

One of the latest tragedies involved a chartered Yak-42 plane carrying the Lokomotiv Yaroslavl hockey team that crashed on September 7 during takeoff from the Yaroslavl airport, killing 44 of the 45 crew and passengers on board. Russian Investigative Committee blamed the crash on pilot error and a mechanical malfunction. In June, 43 people died when a Tu-134 belonging to the now-defunct RusAir charter company crashed near the Karelian town. Investigators blamed a drunken flight navigator for giving instructions that led a less-experienced pilot to attempt a fatal landing in heavy fog.

These tragedies appeared to have forced the Kremlin to recognize deep-running problems, such as poor aircraft maintenance, a lack of pilots, poor flight training, aging production facilities and negligent state supervision, wrote The Moscow Times. President Dmitry Medvedev said a day after the crash that Russia may turn to foreign plane-makers to ensure safe air travel. Moreover, "maximum attention should be paid to pilot training," Medvedev said.

While most accidents have involved old Soviet aircraft, experts say the main cause of tragedies is not so much obsolete equipment, as gross violations and errors, such as drunk or sedated flight crews, forged safety documents and panicking pilots, wrote the Wall Street Journal. "It's the same sort of societal issue you see in parts of Africa and Southeast Asia," Bill Voss, the president of the Flight Safety Foundation, a global nonprofit organization that helped implement Russia's safety reforms five years ago, told the paper.

As can be expected, Russian officials have been quick to reject comparisons to less-developed countries, saying tighter regulations and stricter inspections have been put in place to resolve the problem. But in Europe, the market with most links to Russia, European Union air-safety watchdogs see Russia's situation as "a mirror of the society" in which laws and rules are routinely ignored, wrote the Wall Street Jounral. And the consequences are palpable: many foreign companies that must transport staff to remote Russian oil fields or mines have forbidden employees from using most Russian airlines or boarding any Russian-built airplane, corporate air-safety specialists told the paper. Some require staff to fly between nearby Russian cities using foreign carriers, on detours through foreign hubs such as Vienna or Helsinki.

Questioning the U.S.-Russian “reset” has been a favorite pastime for both Russian and American observers alike. At the slightest hint of trouble – a deployment of a missile shield, a tit-for-tat exchange of visa blacklists – we generally spring to the conclusion that relations are time and again thrust deeper into hot water. And rarely do these events have any true significance in the long run.

Now, however, it seems to be getting more serious. The United States and Russia have become so used to being traditional Cold War enemies, it seems, that an old-fashioned diplomatic row or tough talk about moving missiles around the European mainland doesn’t cause much of a stir. It's clear to everyone involved that there won’t be a war in Europe today, tomorrow or any time soon.

But when the United States steps in to play the “democracy” card, that’s when things get touchy. We saw this with Prime Minister Vladimir Putin’s scornful accusation that U.S. Secretary of State Hillary Clinton – and Western powers, in general – were behind the wave of public protests over alleged vote fraud in last Sunday’s parliamentary elections. Calling out against foreign military interventions is one thing, but when an autocrat feels pushed around on his own turf, he takes it personally. Putin, especially, has always been sensitive to criticism in general, but criticism from the West on Russia’s democratic record is a particularly painful issue for the ex-KGB spy. And if the situation escalates – and it most likely will – the United States won’t just be challenging the words or deeds of the regime – it’ll be challenging the regime itself.

Which is why I hope the U.S. administration has thought this one through. The fact that President Barack Obama hasn’t weighed in on the matter is a bit disconcerting, especially because Clinton seems to already have tossed in her lot against the Russian regime. Of course, it’s far too early to predict a “Russian spring” (or winter, for that matter), as much of the Western press has hinted the past few days. But it is, however, time for the United States to start thinking about taking sides – and about what the consequences might be.

With protest fever taking over Moscow this week, some veterans of the East European protest scene decided to organize their own event to show solidarity with dissatisfied Russians challenging the legitimacy of Sunday’s State Duma elections. Earlier today, three feminist activists from the Ukrainian group Femen protested in front of the Christ the Savior Cathedral. The group’s unusual strategy of protesting topless has earned them column inches in papers around the world and, despite sub-zero temperatures, the women stripped to the waist in Moscow. They had painted orthodox crosses on their chests and held posters reading “God chase away the tsar!” Workers at the church tried to cover the girls up, and the police were called, but Femen managed to leave the scene before they arrived.

Founded in 2008, Femen’s initial aim was to raise awareness for women’s rights. Their first protests targeted the sex tourism that is rife in Ukraine and leads to many young Ukrainian women turning to prostitution. Since then the group has taken on a broader range of issues, from the economic crisis to the State Duma elections that brought them to the Russian capital today.

How successful these protests have been is debatable. Femen leader Anna Gutsol believes that the group has made a lot of progress in terms of raising awareness of women’s rights in Ukraine and breaking the taboos which prevent vulnerable women who may be considering prostitution from talking openly about their choices. The coverage they have received in the Western press may also have made an impact – drawn to pictures of attractive semi-naked women, there’s a chance that potential sex tourists may stop to think about the women involved in the trade. But Femen has so fair failed to force lawmakers to introduce legislation that would better safeguard women’s rights.

But this may be about to change, with one of the group’s current campaigns, which aims to prevent what it predicts will be a massive surge in prostitution during the Euro 2012 soccer tournament set to take place in Poland and Ukraine next summer. Femen wants the European football association UEFA to launch a campaign to educate football fans on the reality of sex tourism and it wants the Ukrainian government to criminalize paying for sex – two clear and reasonable demands, that could make a big difference to women in Ukraine next summer.