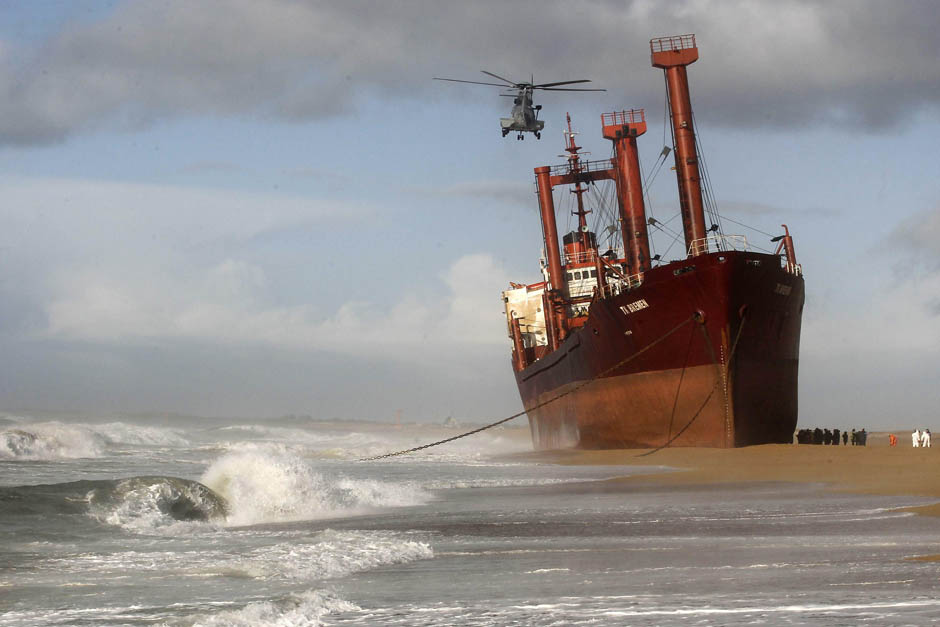 A helicopter surveys the Maltese-registered cargo ship TK Bremen, which ran aground on Kerminihy beach at Erdeven, spilling oil from its engines on the coast of Brittany in western France, December 16, 2011. Winter storm Joachim has battered France's western seaboard since yesterday. 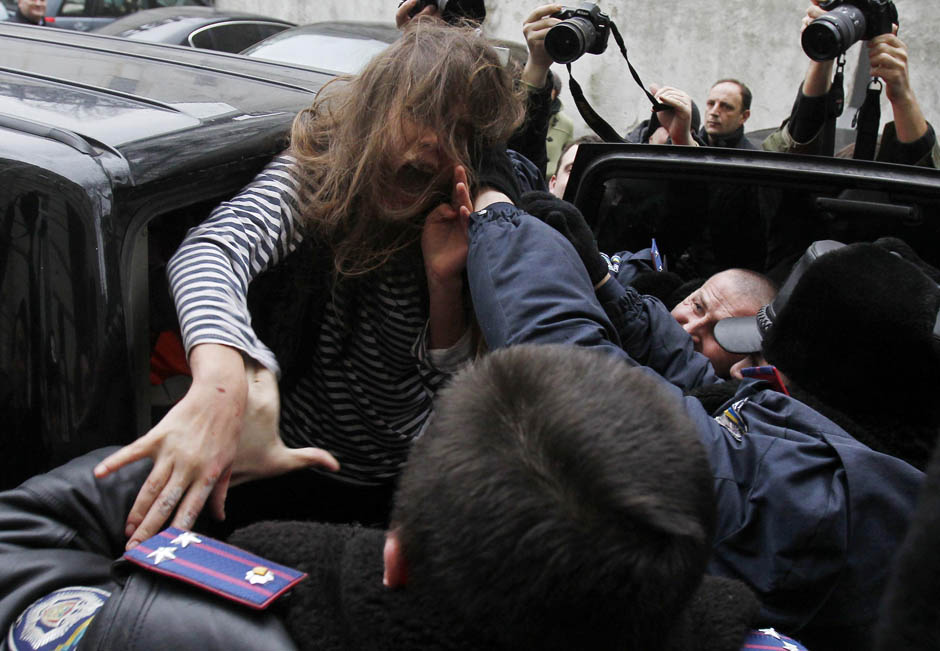 Ukrainian police officers detain an activist from women's rights group FEMEN during a protest outside government buildings in Kyiv December 16, 2011. The protest was organised to draw attention to the lack of women in the Ukrainian government, on the occasion of Prime Minister Mykola Azarov's birthday. 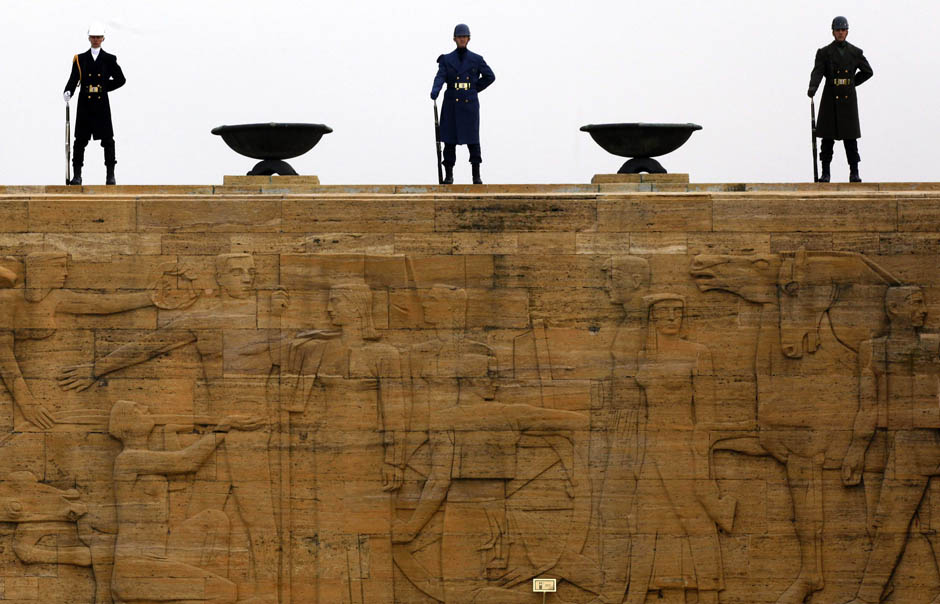 Turkish soldiers stand at attention as U.S. Secretary of Defense Leon Panetta (not seen) attends a wreath-laying ceremony at the mausoleum of Mustafa Kemal Ataturk, founder of modern Turkey, in Ankara December 16, 2011. 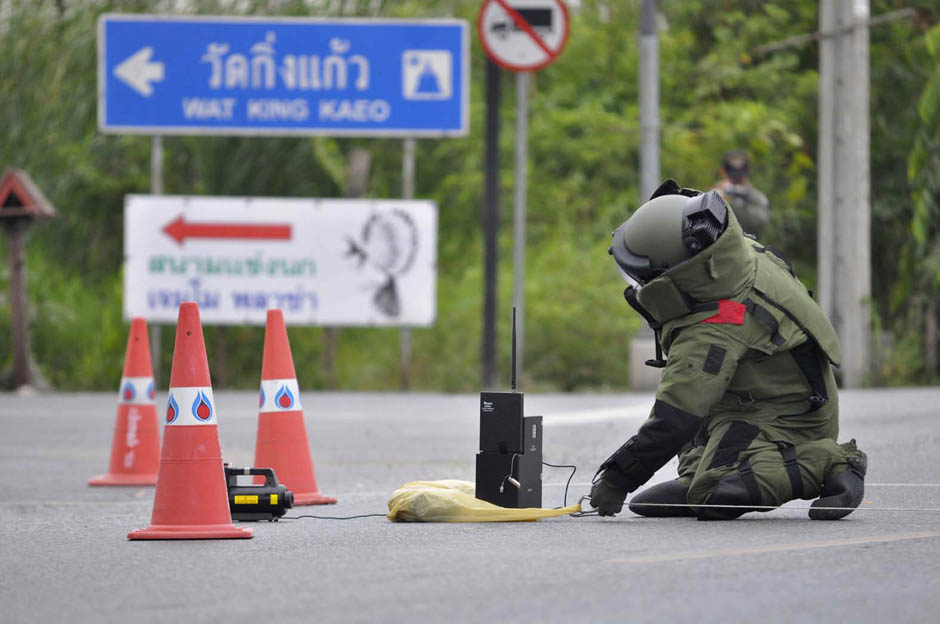 A Thai bomb disposal officer inspects a bomb on a street in eastern Bangkok December 16, 2011. Thai police said on Friday they had found and defused six homemade bombs hidden in eastern Bangkok. A man suspected of planting the devices was arrested at early dawn, according to local media. 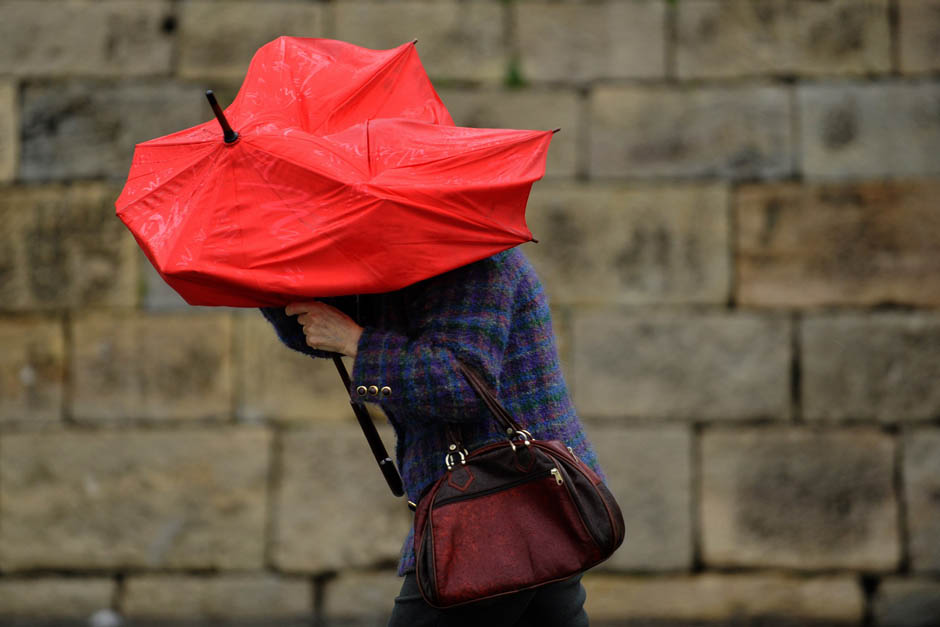 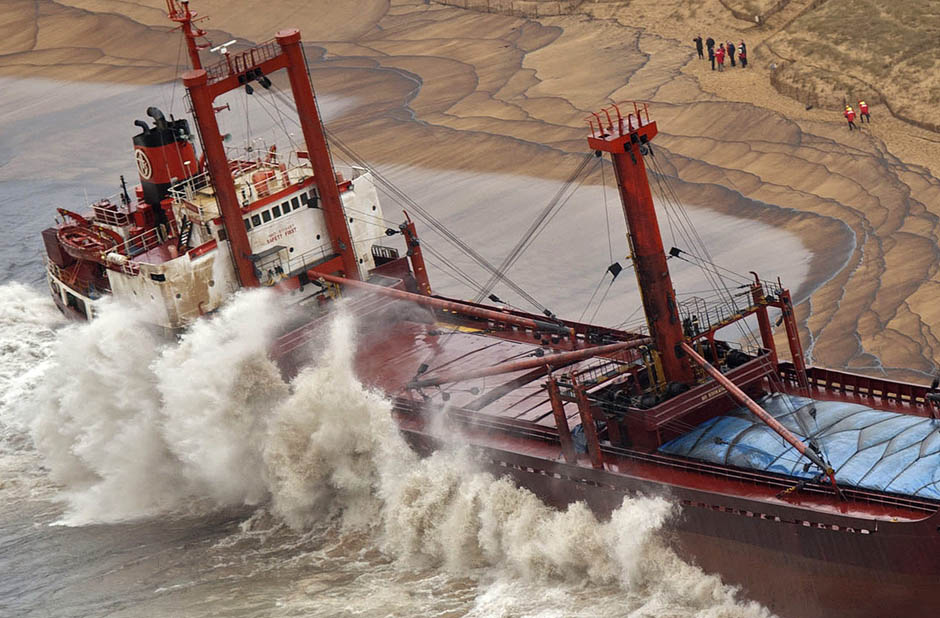 An aerial view of Maltese-registered cargo ship TK Bremen, which ran aground on Kerminihy beach at Erdeven, spilling oil from its engines on the coast of Brittany in western France, December 16, 2011. Winter storm Joachim has battered France's western seaboard since yesterday. 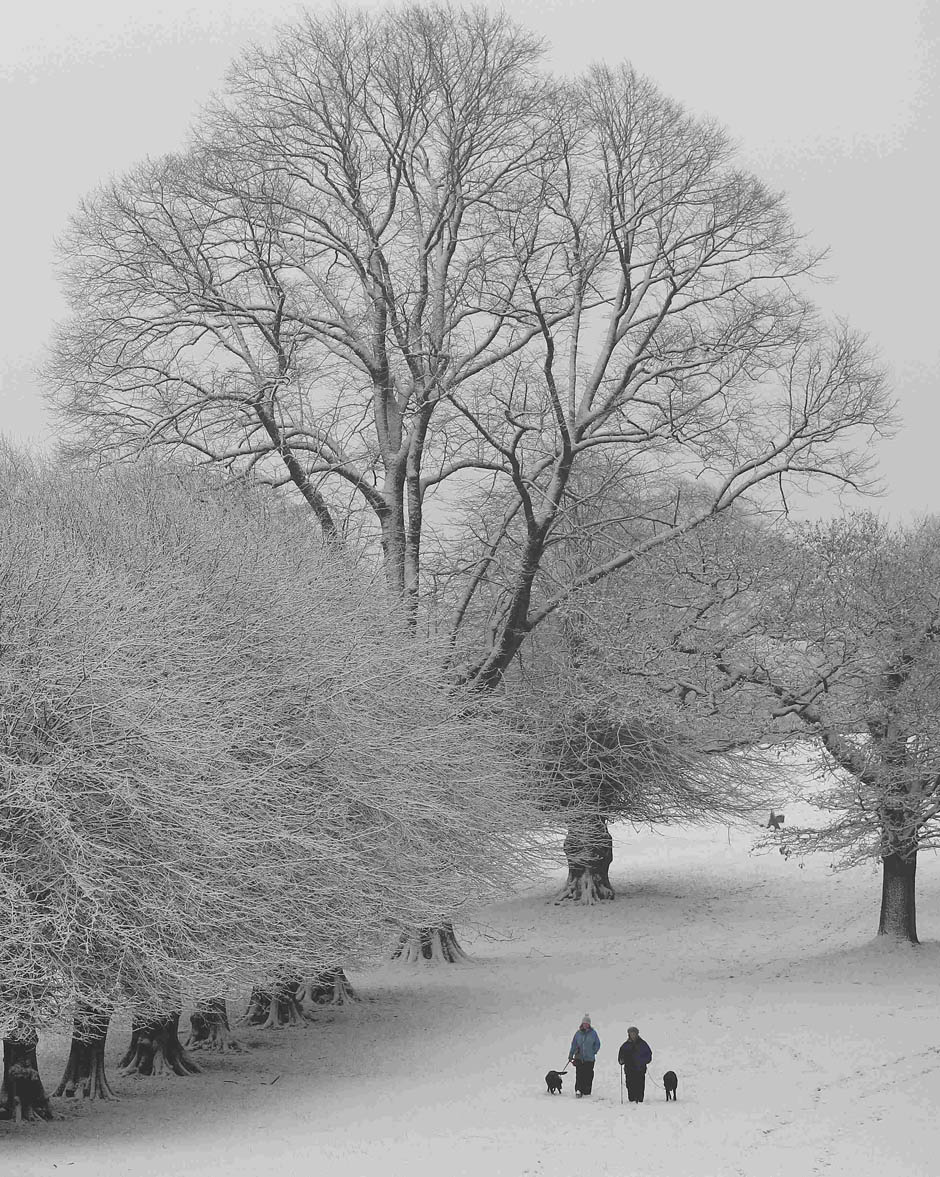 People walk their dogs in the snow at Lyme Park near Manchester, northern England December 16, 2011. 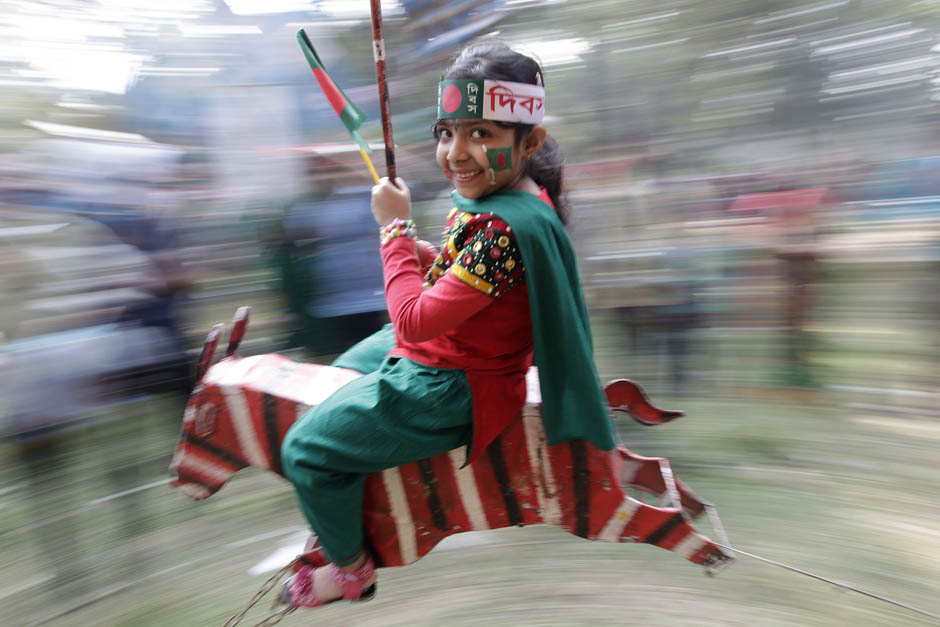 Eleven-year-old Suha rides a carousel during a festival to mark the 40th anniversary of the Bangladesh's independence in Dhaka December 16, 2011. Bangladesh won independence from Pakistan on December 16, 1971, following a nine-month guerrilla war which cost millions of lives. 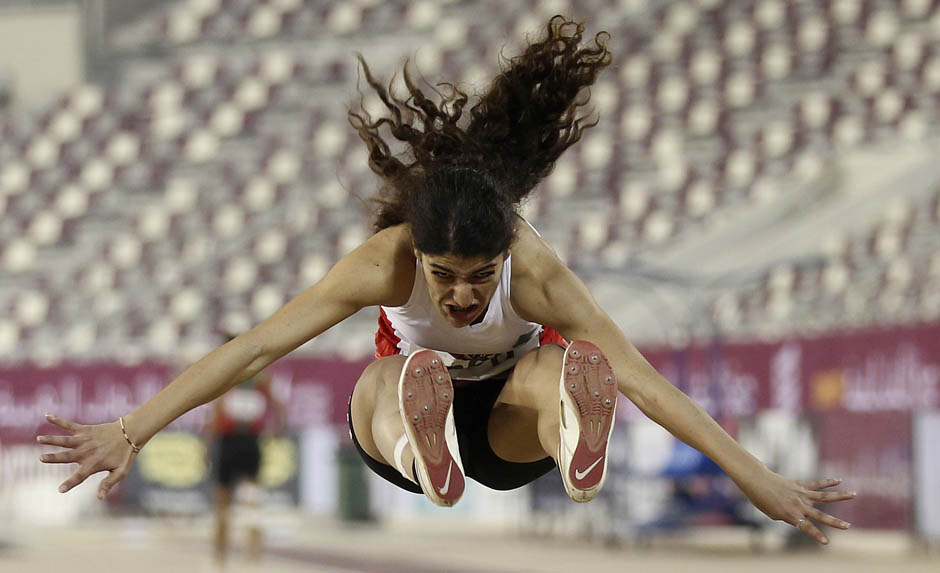 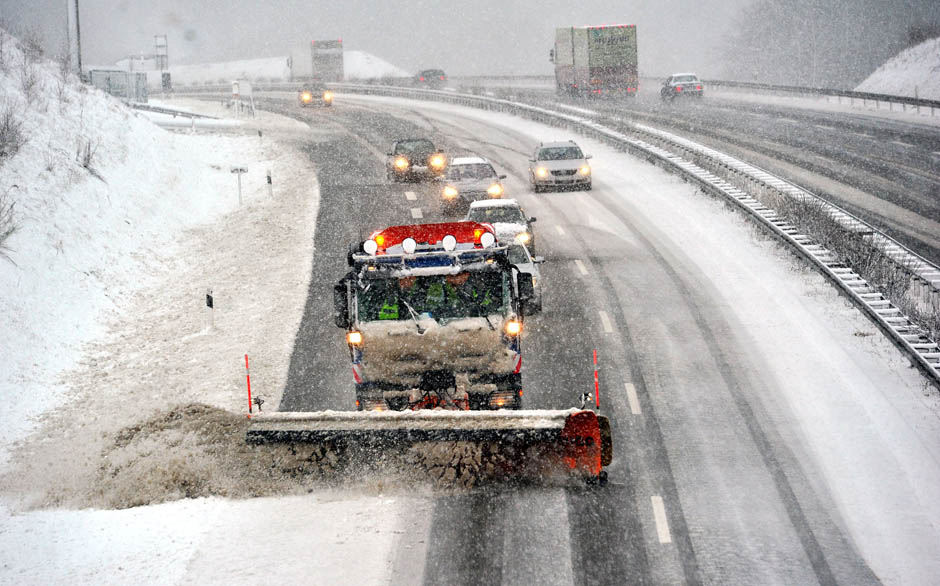 A snow plough clears the motorway near the eastern German town of Schleusingen on December 16, 2011. A storm is raging over Germany due to intense low-pressure system named 'Joachim'. 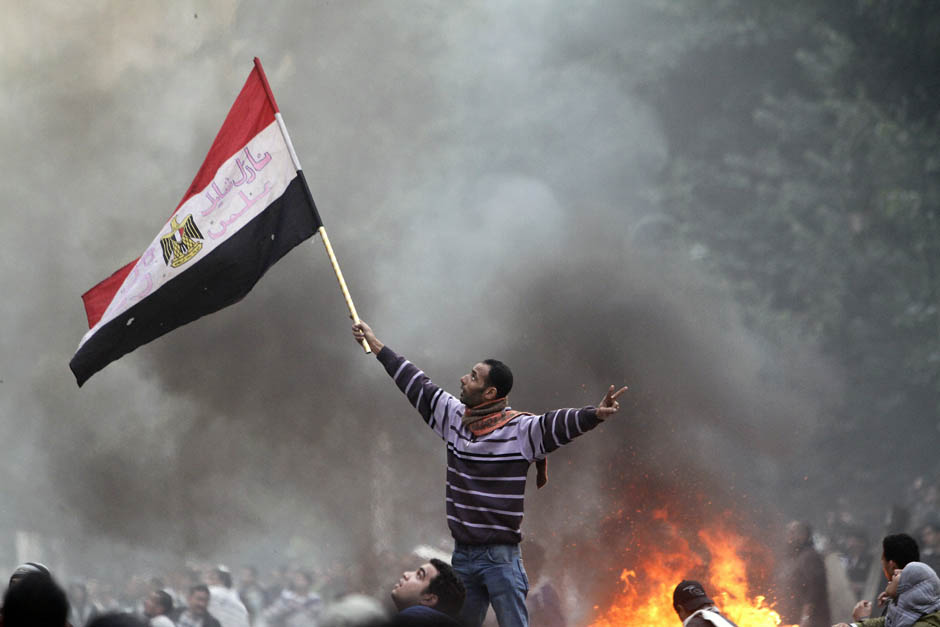 An Egyptian protester waves his national flag while making the victory sign outside the parliament building during clashes with soldiers near Cairo's Tahrir Square on December 16, 2011. Egyptian troops clashed with petrol bomb-throwing protesters against military rule in Cairo, as the worst violence in weeks overshadowed the count in the second phase of a landmark general election. 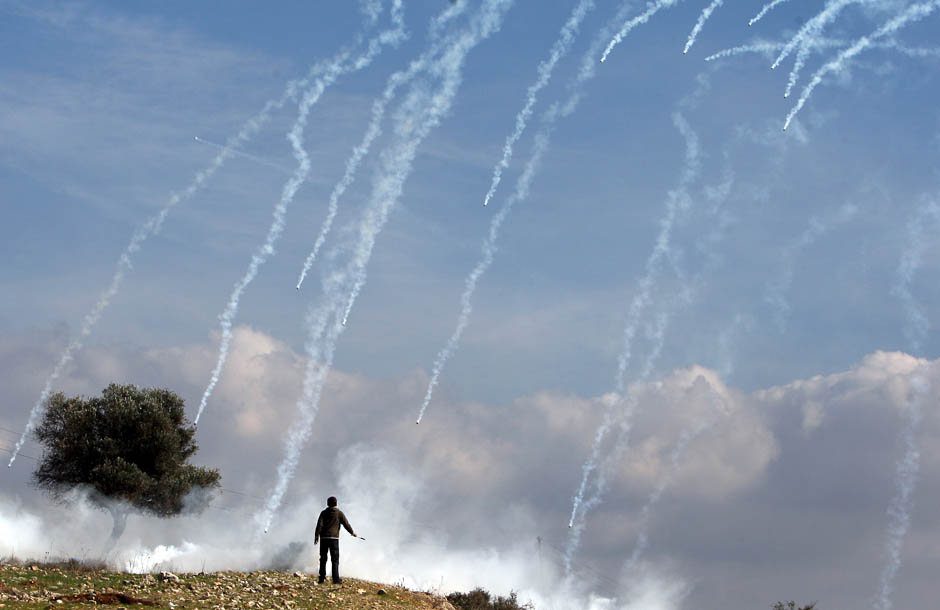 A Palestinian youth observes as Israeli soldiers fire tear gas during a weekly protest against Israel's controversial separation barrier in the West Bank village of Nabi Saleh on December 16, 2011. 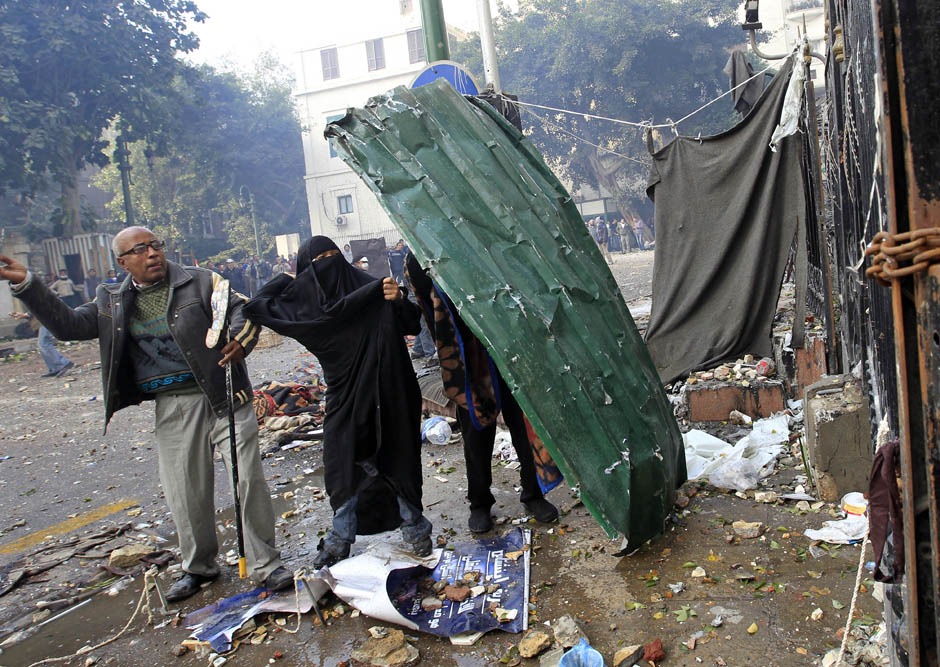 Egyptian soldiers clash with protesters near Cairo's Tahrir Square on December 16, 2011 after demonstrators threw petrol bombs and set fire to furniture in front of the nearby parliament. 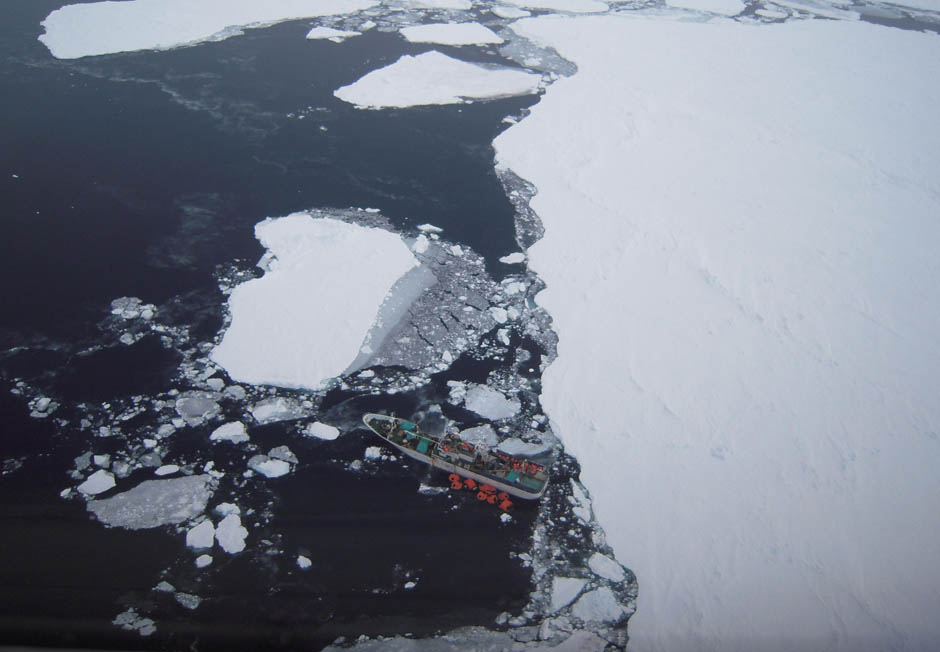 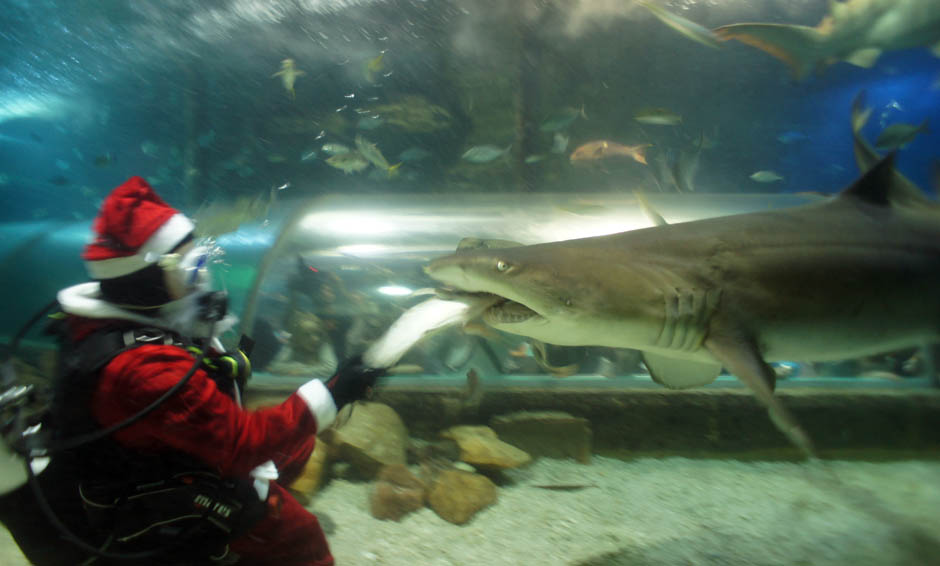 A handout photo taken and released by Oceanworld on December 16, 2011 shows a scuba diver dressed as Santa Claus hand feeding Christmas treats to a grey nurse shark at Oceanworld by Sydney Harbour. The popular aquarium has Australia's largest collection of critically endangered grey nurse sharks which known as the 'Labradors of the sea'. 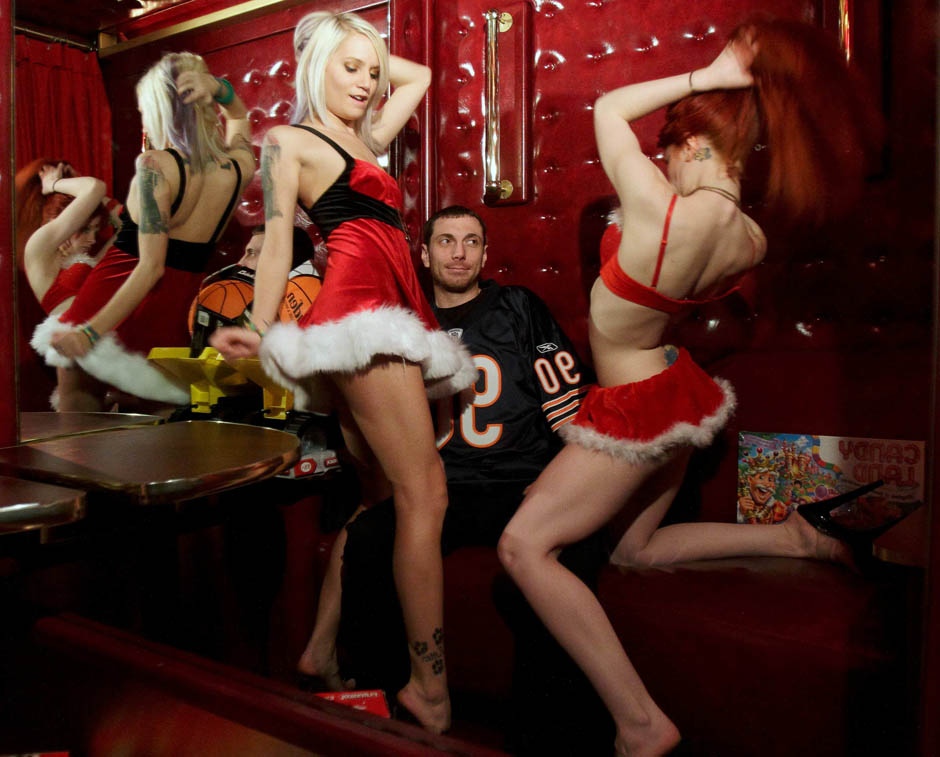 Audrey (R) and Daisy perform a free holiday themed lap dance for Brian MacDonald after he donated a child's toy at the Admiral Theatre in Chicago, December 15, 2011. The strip club is collecting toys for a Christmas Charity through to December 17. 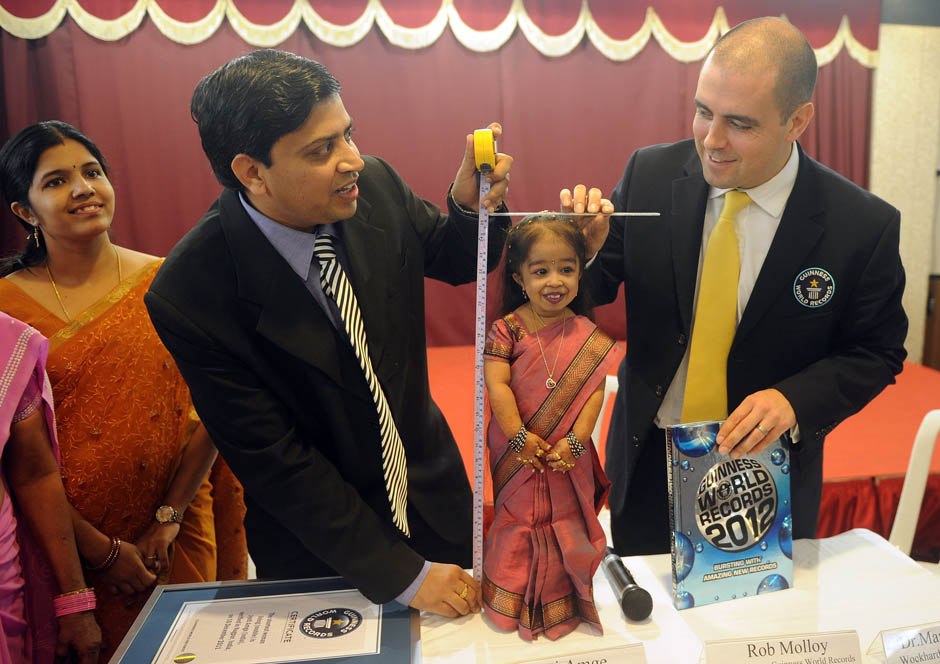 Guinness World Records Adjudicator Rob Molloy (R) and doctor Manoj Pahukar (2nd L) measure Jyoti Amge (C), 18, during a news conference in Nagpur on December 16, 2011. Amge was officially announced by the Guinness World Records on December 16 the world's "shortest woman living (mobile)" measured as 62.8cm (24.7 inches) and will take the title from US woman Bridgette Jordan, previously held the record at 69.5 cm (27.4 in). 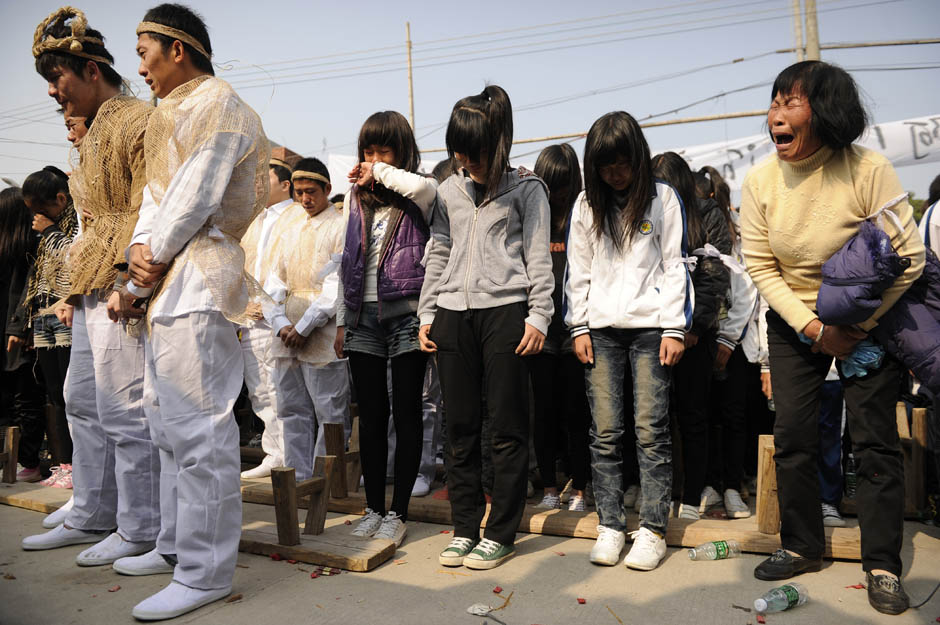 The son of Xue Jinbo, a 42-year-old village leader who died in police custody, Xue Jindi (L) and relatives attend the funeral ceremony in Wukan, a fishing village in the southern province of Guangdong on December 16, 2011. Thousands of residents of a Chinese village under police blockade rallied Wednesday 15 to demand the government take action over illegal land grabs and the death in custody of a local leader. 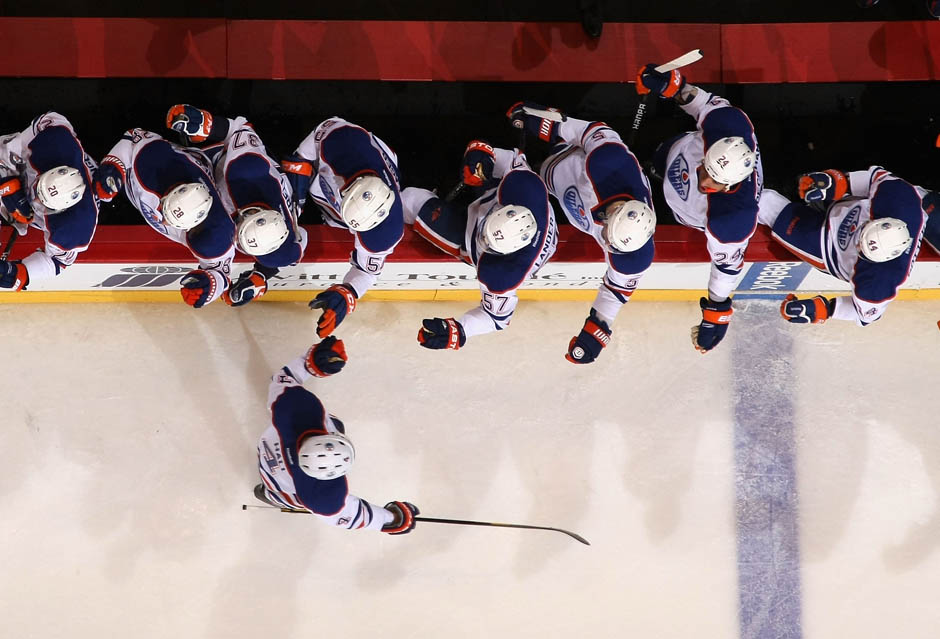 Taylor Hall #4 of the Edmonton Oilers celebrates with teammates on the bench after scoring a thrid period goal against the Phoenix Coyotes during the NHL game at Jobing.com Arena on December 15, 2011 in Glendale, Arizona. The Coyotes defeated the Oilers 4-2.

Posted in: News, Photos
Tags: photos of the day