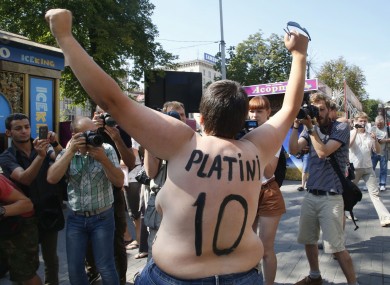 A BARE-BREASTED feminist today staged a one-woman protest at a Euro 2012 fanzone in Kyiv, breaching security at the pen of a “psychic” pig to complain about how football fans had ruined the Ukrainian capital.

The woman, wearing only a pair of jeans and with an uncompromising message to the competition organisers written on her chest, got into the enclosure housing Funtik the hog in the special area set up for fans without tickets to watch matches.

The protester belonged to the Femen group, who have staged previous demonstrations against prostitution, sex tourism and sexual harassment — usually half-naked or scantily clad.

Femen said later on its website that it was “outraged by this ghetto of alcohol and football in the centre of Kyiv” and accused the city authorities of “handing over the city to the vandalism organised by the football mafia at UEFA”.

An AFP photographer witnessed security guards removing the woman from the enclosure. Funtik the prognosticating porker is one of a number of apparently “psychic” animals vying to assume the mantle of Paul the Octopus, who correctly predicted the results of the German team in the last World Cup.

Other supposedly clairvoyant animals for the current tournament include an Indian elephant and a raccoon.

Portugal v Czech Republic: the take from our man in Warsaw

Get our free app for
the iPhone iPad

Also available in
the Android Market