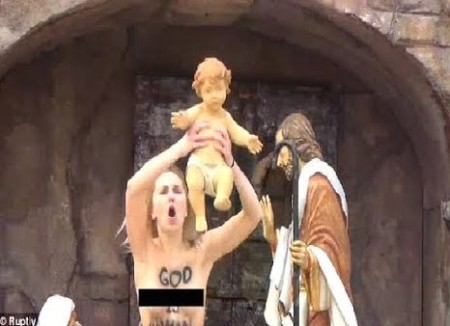 It was an attack of unreasoning rage and unrelenting hatred on one of the world’s greatest symbols of love and peace, life and hope.

On Christmas Day in the heart of Catholic Christianity, St. Peter’s Square in Rome, the leftist radical and militant feminist group, Femen, staged another of its outrageous “happenings” against its favourite target, the Catholic Church. On one of Christianity’s holiest days, a Femen member, Iana Aleksandrovna Azhdanova, a Ukrainian citizen, invaded the square’s famous nativity scene and seized the statuette of the Baby Jesus. The scandalous act occurred shortly after Pope Francis had given his traditional Christmas greeting to the crowd of faithful when many people were still present on the square.

Femen originated in Ukraine in 2008 where it opposed Russian President Vladimir Putin and the Orthodox Church, which it regards as Putin’s ally. The women’s rights group, international in membership, is perhaps most famously known for performing their protests, or “happenings,” as it calls them, bare-breasted.

Azhdanova was no exception. After removing her shirt, she appeared topless in the creche with the words “God is woman” written in English on her exposed chest. At other ‘happenings’, onlookers have been treated to such aggressive slogans as ‘my body is my weapon’, ‘religion is slavery’, ‘God is dead’, ‘f**k church’, and ‘women’s rights first’.

Fortunately, a Vatican policeman was able to stop Azhdanova and recover the statuette before she could carry it off. He led her away, covering her nakedness with his policeman’s cloak. Azhdanova was arrested by Vatican authorities and accused her of “vilification of religion, obscene acts in public and theft,” was later released freed.

“[The group has] intentionally, repeatedly and gravely violated the right of the faithful to see their legitimate religious convictions respected,” said Father Frederico Lombardi, a Vatican spokesman.

While much attention has been paid to the danger creeping Islamisation presents to European societies, the threat militant secular humanism poses to Western civilization is sometimes overlooked. It is largely this leftist secularism, however, that is responsible for having pushed Christianity in Western Europe out of the public space and the marketplace of ideas to society’s fringes, by such measures as banning Christian symbols in the classrooms and nativity scenes in public buildings, among others.

This impulse to de-Christianise Europe is so strong and has enjoyed such success over the past decades that the European Union’s constitution does not even recognise the continent’s Christian roots. As a result, exposure to Christianity is now confined primarily to the churches, where, the left hopes, it will atrophy.

But even in its holy sanctuaries, Christianity is not safe from the radical left. Militant atheists are violating, even physically invading, churches and other sacred Christian places to erase Europe’s last ties to the religion that formed it. And the Femen are the best known storm troopers of this sacrilegious movement.

Nowhere in Europe has Femen conducted its anti-Catholic campaign more vigorously and “gravely and repeatedly violated” the rights and “legitimate religious convictions” of the Catholic faithful than in France, where it is now based. The reason for this is that there exists among the French left a greater tolerance than in other European countries for anti-Christian acts that dates back to the French Revolution. During that great upheaval, churches and cathedrals, such as Paris’s famous Notre Dame, were turned into ‘Temples of Reason’ to reflect the new atheistic thinking. And ceremonies celebrating the revolutionaries’ new goddess, Reason, replaced the traditional mass.

This long, two hundred-year history of anti-Catholicism and anti-clericalism is responsible for producing in France the current environment of intolerance towards Christianity. This intolerance, found especially among leftist and liberal political politicians and media elites, in turn, has been conducive to Femen’s anti-Christian activities.

“The Femen thus know that they are able to count on the support of a certain number of opinion leaders, media outlets and intellectual backing,” wrote Julie Graziani, a spokesperson for an association of young French Catholics, in Le Figaro.

It is also this negative tolerance that has allowed Femen activists to escape almost unscathed any legal punishment in French courts. The most recent example occurred only days before the Saint Peter Square incident. A Femen siren, Eloise Bouton, received a one-month suspended sentence from a French judge for a “happening” she staged in Paris’s St. Madeleine church in December, 2013.

Using the customary Femen tactics of “caricature, provocation, blasphemy, and intolerance” to garner media attention, Bouton had invaded St. Madeleine several days before Christmas (these women must really have something against the birth of Jesus) and took up a position (bare-breasted, of course) before the altar and the astonished eyes of about a dozen parishioners and choir members present.

Wearing a biblical-like head-covering to appear like the Holy Mother Mary, Bouton proceeded to mimic an abortion, leaving pieces of bloody calf liver on the altar steps to symbolise the aborted foetus of Jesus. Bouton concluded her act of profanation “`a la sauce Femen,” as one French journalist called it, by urinating on the floor. (A similar, blasphemous “happening” occurred only days later during Christmas mass in Germany’s ancient Cologne cathedral. A Femen sitting in a front row pew suddenly disrobed and jumped, bare-breasted and screaming, on to the altar with “I am God” emblazoned on her chest).

As per Femen custom, Bouton’s bare chest and stomach were also not left bare. This time, they displayed the message “343 salopes” (sluts). This lovely communication refers to a manifesto by 343 women calling for the decriminalisation of abortion. On her back, in English, was written the anti-Christian message: “Christmas is annulled. Jesus is aborted.” Bouton was convicted on the charge of “sexual exhibition.”

Unsurprisingly, Bouton believes she did nothing wrong. Her defense was that she was carrying out a political act and not a sexual one. Femen’s politics uses the nude female body as a placard “to convey a message” and “not to seduce.” Bouton said she had wanted less “to shock” with her nudity than to provoke a realization about abortion rights, not “to create an emotional reaction but a reflection.”

It is, however, difficult to comprehend Bouton’s thinking. How is going into a church a few days before Christmas and standing bare-breasted before the altar while simulating an abortion of the infant Jesus not going to shock and create “an emotional reaction” among Christians and not cause them to feel their private, spiritual sphere and sense of sacredness have been violated? The same could be said about the attempted theft of the Jesus statuette in Rome.