MUNICH -The opposite of good is well-intentioned. And the present conflict between Femen activists and Muslim feminists demonstrates how a “well-intentioned” action can fail so miserably.

Femen activists are supposed to be the good guys – the ones who stand for freedom and emancipation. To spread their message they protest topless – naked but not available was the idea when they first started demonstrating against prostitution, sexism and trafficking women at the European World Soccer Championships in 2012 in Ukraine, their home country.

But bare breasts don’t translate well in every culture, as the latest of Femen’s major campaigns, International Topless Jihad Day, has showed. On April 4, around the world, topless women bearing "Fuck your morals" signs paraded in front of mosques and Tunisian embassies. In Germany there were demonstrations in Berlin and Hamburg. The Femen website showed an image of naked breasts painted Islam green and slogans that read "Titslamism" and "Free Amina."

Mid-March, a young Tunisian woman, Amina Tyler, 19, had photographed herself topless with the words "Fuck your morals" painted on her torso in black. After she posted the photos on Facebook, Salafi cleric Adel Almi called for her to be stoned to death. Tyler later said on Tunisian TV that she had acted in the cause of women’s liberation.

In an interview last weekend with French TV channel Canal Plus, Tyler thanked Femen for its support and related how, on Facebook and by phone, she had received death threats and threats of acid attacks.

Meanwhile, 13 UK activists formed a group called Muslim Women Against Femen and penned an open-letter with a clear message: "We don't need you!"

Their concern with Tyler, the catalyst for Topless Jihad Day, was only marginal. In their open letter, the group writes that Femen portrays Muslim women as “helpless.” But Muslim women are more than able to fight back, the letter said, adding: “Take aim at male supremacy, not Islam. Your priorities are messed up."

The limits of nudity

Femen leader Inna Schevshenko penned her own open letter in response to the Muslim Women Against Femen statement, which had been widely disseminated not only via Facebook and Twitter but the subject of public demonstrations as well. In interviews she said, "through all history of humanity, all slaves deny that they are slaves" and told the Huffington Post UK: “They write on their posters that they don’t need liberation but in their eyes it’s written ‘help me.’”

A day after Topless Jihad Day, supporters of Muslim Women Against Femen started their own Muslimah Pride Day, with hundreds of supporters uploading pictures of themselves on Facebook bearing posters with messages such as "Nudity does not liberate me and I do not need saving" or "I am free." 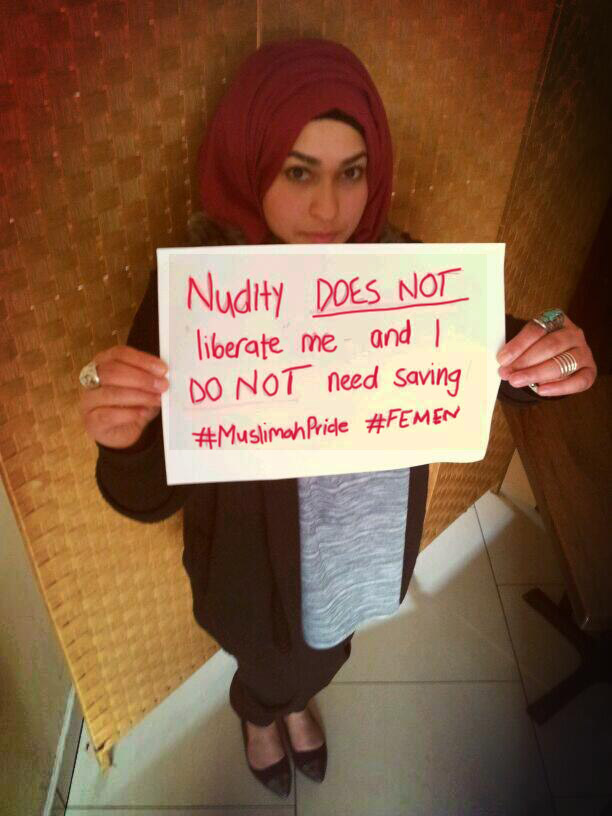 That many of these women are wearing headscarves is seen by Femen activists as a sign that they are not free. Under #MuslimahPride one user said on Twitter: "Stockholm Syndrome" – thus using exactly the same kind of rhetoric as Schevshenko in her slavery remarks. Stockholm Syndrome refers to a phenomenon whereby hostages defend their tormentors.

But it is precisely this logic that enrages the anti-Femen movement. "We are fed-up and tired of hearing from women of privilege perpetuating the stereotype that Muslim women, women of color and women from the Global South are submissive, helpless and in need of western ‘progress,’” write the Muslim Women Against Femen. Instead of seeing where Femen was coming from – women united against their oppressors – the Muslim activists were seeing another manifestation of western Islamophobia.

From a German point of view, equating the Ukrainian women’s movement with “western colonialism” seems odd. However, the way Femen uses bare-breasts and catchy slogans to create a kind of international protest “brand” without considering cultural differences or sensitivities was also experienced in Germany, where last January the group irritated German feminists by using the infamous "Arbeit macht frei" slogan (“Labor makes you free,” a phrase that was placed over the entrance of Auschwitz concentration camp during WWII) during a protest in Hamburg. 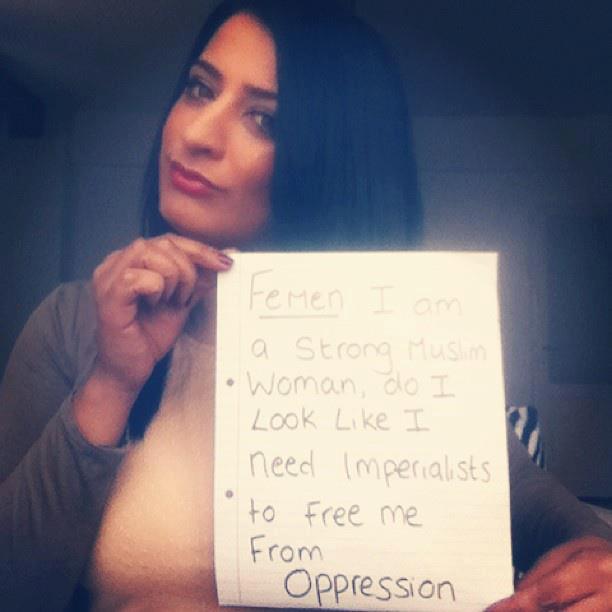