Nudity as a form of protest wasn't invented by PETA. Events such as the World Naked Bike Ride uses nudity as a way to protest "oil dependency and to celebrate the power and individuality of [their] bodies," 600 environmental activists went naked in 2007 to protest global warming and even as far back as the early 1900s, the Doukhobors, a Russian pacifist religious sect, held nude protest parades. So I wouldn't go so far as to say that nudity was useless as a tactic in social movements.

Lately the Ukrainian protest group, Femen, has been getting a lot of attention. Why? Well, they're beautiful, thin, young women who are mostly topless. They're described alternately as a "women's rights group" or a "feminist group," as they campaign against issues such as trafficking, international marriage agencies, and sex tourism. According to their website, their goal is "to shake women in Ukraine, making them socially active, [and] to organize... a women's revolution." Of course feminists have been working towards revolution for decades and yet, somehow, have never been quite as popular as Femen appear to be now.

When three protesters showed up at an Occupy demonstration in Davos, yelling "poor because of you" outside the World Economic Forum, the media fell in love.

These three women were covered by pretty much every media outlet out there -- mainstream and alternative alike. Particularly, many of the Occupy sites seemed enamoured. From right to left, dudes love Femen. Funny, because most of them seem pretty disinterested in feminist protests and movements otherwise.

Over at Occupy the Environment's Facebook page they stated the obvious, commenting above the story: "That's how you make it into the mainstream media." 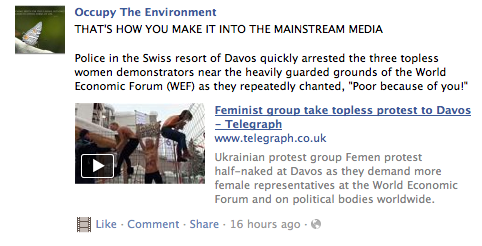 Yep. As witnessed by Slutwalk and by PETA, playing to the male gaze and going nude or almost nude is a great way to get media coverage. Particularly, as witnessed by coverage of Femen, if you're a thin, young, conventionally attractive woman.

In fact, both PETA and Slutwalk stand by that very argument, defending problematic strategies and sexist branding on the basis that they would never have received so much media attention had they not gone with controversial marketing ploys. Whatever gets the attention of media is represented as a "good" thing and as something that somehow cancels out hypocritical messages.

Clearly nude protests are not the problem. The problem is that, within our pornified culture, women seem to only be able to find power in their sexualized bodies. Have we seen viral media coverage of nude male protesters over the past few years? Not that I can recall. PETA's ads are certainly focused on the female body and, generally, that body is sexualized, thin, and often surgically enhanced.

When someone over at Occupy Ottawa's Facebook page posted an image of the women, naked from the waist up, the point was made by a couple commenters that it seemed unfair that women had to bare their breasts in order to get anyone to pay any attention to their message. This point was met with anger, confusion and disdain. In fact, the response from the page's admin as well as most other commenters on the page was a definitive: "stop with all the feminism, why dontcha." This was followed by predictable commentary insinuating that those who weren't fully supportive of Femen's tactics and the page's commentary were "dividing the movement" and being "counter-productive" by bringing feminism into the conversation. Interesting, because Femen is a group that is often associated with feminism. It would appear as though we only like feminists so long as they are nude.

It's frustrating, but understandable, that the mainstream media jumps at the opportunity to splash images of young women's breasts across screens, but it's even more frustrating that progressive groups don't see the problem with these tactics. And of course, we have to ask whether the media or the public are really getting the "message" they are meant to get. Are we seeing these images and thinking about systematic poverty or the exploitative nature of prostitution? Or is the message just: titties!!

Judging from the popularity and response to Femen, I'm getting the feeling that the "message" is all but lost.