The 5’ 7” 21-year-old Plastic Fantastic internet sensation is lauded as extraordinarily desirable - an ideal female aesthetic - by thousands of commenters and 215,000+ “Like” clickers on her Facebook page that’s only 24 days old. Plus she’s been awarded mainstream attention by Forbes,  HuffingtonPost, Daily Mail, Fox News, ABC News, New York Daily News, and International Business Times. Eventually, millions of wide-eyed adorers will gaze greedily at the 11,00 photos of her already online.

“Barbie” - the doll - has been castigated since her development in 1959 as a female caricature with impossible-to-attain proportions. Valeria hasn’t precisely copied her mentor’s dimensions - she’d need a 39-18-33 ratio at 6’ in height - but her curves - created via dozens of nips, tucks and lifts at the supposed cost of $800,000 - resemble the plastic icon close enough to re-animate the original prepubescent lust of many grown males, who secretly undressed, long ago, the dolls of their sisters.

Does the emergence of this life-size Barbie clone represent the future of cosmetic enhancement? Will other girls/women follow in the faux-Barbie’s slim pointy footsteps? Will thousands of ribs be removed to achieve the minuscule belly? (Valerie’s goal, she claims, is to be photosynthetic, a sun-eater, avoiding digestion entirely.) Will millions of chins and cheeks be chiseled to achieve her dainty visage? Will breasts world-wide be pumped up to impersonate her pontoon mammaries?

The answer to these questions is Yes Yes Yes Yes Yes they already have. Truth is, Miss Lukyanova’s plagiarism of a hottie icon trails South Korea’s idol-mimicry by at least half a decade. In Seoul - widely regarded as the world capital of plastic surgery - cosmetic enhancement is avidly accepted by the masses, entrenched in the culture. An estimated 20% of all SK women between the ages of 19-49 have had “some work done.” Additionally, it’s popular in SK to get your features restructured so you can resemble a hallyu star. The phrase, “imitation is the highest form of flattery” is taken seriously in East Asia; fans who identify with a beautiful TV soap opera or K-pop star can fulfill their desire to look like Lee Young-Ae, Kim Hee-Sun, Song Hye-Gyo, or Han Ga-In, by scheduling appointments in the Gangnam district of Seoul, where over 400 plastic surgery clinics and skin-treatment centers are located.

The West has not traveled down this copy-cat road as quickly, perhaps due to it’s higher regard for individuality. Taylor Swift has made squinty eyes and lace dresses popular, and Justin Beiber’s haircut is “cool” with middle schoolers, but few Caucasians have carved themselves up to resemble the famous. A notable exception is the OctoMom - Nadya Suleman - who hijacked the full lips and vulpine face of Angelina Jolie. Suleman is derided, justifiably, as an unlikable loon, and her brazen rip-off of Brad’s beau’s face has perhaps stalled copy-cat cosmetology in the West.

But now, the arrival of “Barbie” from the Ukraine… Her emergence from the ex-Soviet steppe-locale appears, simultaneously, both complicated and unsurprising. The Ukraine is known for both it’s radical feminism and it’s stunningly lovely XX gender - Traveler’s Digest recently selected the women of Kyiv (the capitol) as the planet’s most beautiful.

The Ukraine activist group FEMEN is possibly the most visible, revolutionary feminist squad in the world today, organized by three women who committed themselves to “Marxism, instead of Marriage.”  FEMEN primarily opposes the legalization of prostitution and sex-tourism in its homeland, but it’s also staged demonstrations against Vladimir Putin (for being a “Gas Gangster”), Pope Benedict XVI (“Pope, Get Out of my Pussy!”),  Paris Hilton (for supporting the “corrupt” modeling industry), Dominique Strauss (for being “the symbol of lawless, arrogant rapists”), the embassies of Iran (for stoning women to death) and Egypt (to support the revolution), and it journeyed to Turkey (to protest domestic violence). 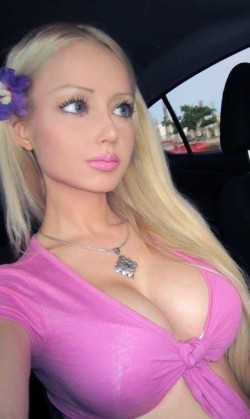 I haven’t located any FEMEN opinions of Valeria Lukyanova, but I don’t think they regard her self-acquired shapeliness as a anti-feminist statement. If Valerie was a prostitute they’d decry her activities, but she’s not - her appearance lures attention to her career as a model, an esoteric singer (she claims to have written 70 songs) and a New Age spiritual-philosopher.  Capturing media gaze via sex appeal is, of course, a strategy that FEMEN itself does quite brazenly.

In the fast-approaching future:

Will entire malls be filled with lookalike Barbies shopping for Barbie clothes? Accompanied by lookalike Ken-males?

Will these perfect people line up to sip smoothie drinks alongside other desirables, representing Latin, African, Asian, Arab, etc., startlets-and-stars-of-the-month?

Will transforming our face and physique be easy and cheap in the next generation, in surgeries as simple as dental cleaning?

Will we abandon flesh-love altogether, preferring instead, sex liaisons with cyborg Barbies, Kens, and Kim Hee-Suns?

Will sex in the future be entirely virtual / pornographic?

Will we become nanobot-beings, metamorphosing into whatever enticing shape we want?

Will we be empathetically deeper, in love - and turned on - by kindness and wisdom; will we be absolutely disinterested in physical form, orgasming instead via emotional and intellectual channels?

Or… finally… will we have all these options, and more, in a highly-variable society that offers dozens of choices in lifestyle menus that continue to expand, exponentially?

I don’t know. Predictions?  I don’t see Valeria Lukyanova as instantly forgotten. I see her as a historical marker, a pioneer in a trend - where we actualize our desire to become our favorite toys.

The result?  “Spidermans” fly through our cities.  “Incredible Hulks” crash our parties. Everyday is Halloween.