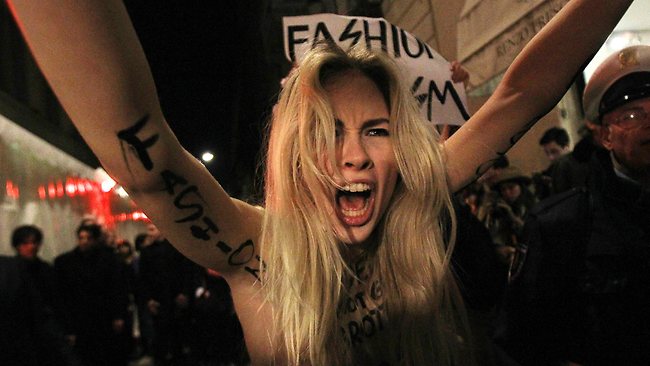 A topless Ukrainian activist of the group "Femen" shouts as she stages a protest at the entrance of the Versace Women's Fall-Winter 2012-13 fashion show, during the fashion week in Milan, Italy, Friday, Feb. 24, 2012. (AP Photo/Antonio Calanni)
Source: The Daily Telegraph 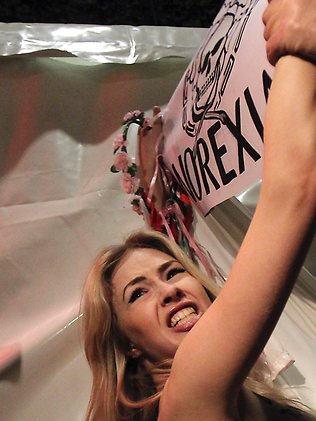 MILAN: Topless feminists clashed with police as they protested against the use of anorexic models outside the Versace fashion show yesterday.


The protesters, from the feminist group Femen, wore jeans and handwritten slogans such as "Fashion = Fascism" and "Anorexia" scrawled across their bare chests.

The three women - understood to be models themselves - chanted outside the high-end fashion show while holding aloft handmade placards with the same mottos and "Models do not go to brothels".

But Italian police forcibly blocked the protesters when they approached the entrance to the Versace autumn-winter 2012-2013 show during the Milan Womenswear Fashion Week.

Donatella Versace's daughter and heir to the fashion throne, Allegra, has been battling anorexia for years.

The fashion house sparked controversy at shows last year over its use of incredibly thin models.

It now appears that campaigning against anorexia is top of their agenda.