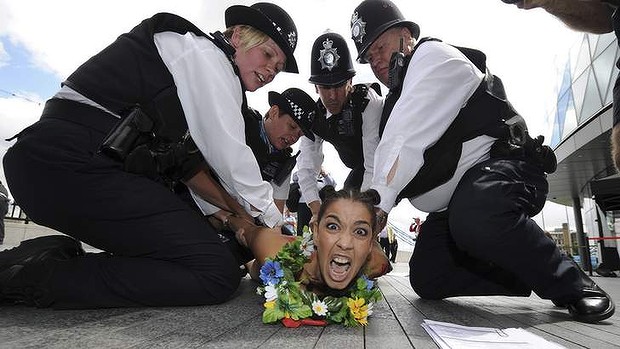 Femen’s punk activists are taking on the world by taking off their tops.

A Femen activist is detained during a protest against what they called "bloody Islamist regimes" taking part in the London Olympics. Photo: Reuters

Their targets have included Silvio Berlusconi, Vladimir Putin, Dominique Strauss-Kahn, IKEA, the G-8, and the Pope. The predominantly blonde-haired, bare-breasted young women have struck in 17 countries across the world and are reported to have 150,000 supporters worldwide. They call themselves the new Amazons, boldly evoking the mythical nation of all-female warriors.

Protests by Femen, as the group is named, are designed to attract attention. In August, a Femen leader named Inna Shevchenko demolished a towering wooden crucifix, around three times her size, armed with a chainsaw. Dressed in nothing but coral hot pants, black leather boots, protective goggles, and a floral wreath on her head - a symbol of unmarried women in her native Ukraine - Shevchenko knelt to cross herself before destroying the crucifix in Kyiv, Ukraine's capital. The words "Free Riot", painted in black over her chest, suggested the act was in response to the arrest of singers belonging to Pussy Riot following the band's "punk prayer" in a Russian Orthodox church.

Some members of Femen have been arrested up to 40 times.

Femen is an all-female protest group devoted, they say, to "attacking patriarchy, in all its forms: the dictatorship, the church, the sex industry". Members' punk rock attitude and extremism are a recipe for lots of exposure, but a swarm of questions has followed the group into the spotlight. What is one to make of Femen? Are they a force to be reckoned with or just an exhibitionistic group of women who like to disrobe publicly? 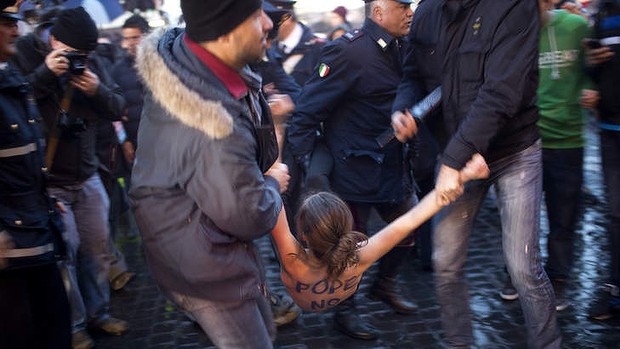 A Femen activist is detained by Italian police officers following a protest against the Pope while the papal conclave was sitting. Photo: AP

Femen was founded in Ukraine in 2008 by a group of women in their 20s. They were Anna Hutsol, a former concert organiser; Oksana Shachko, a former student of iconography; and Alexandra Shevchenko, a former professional coach at an electronics company. The Ukrainian sex trade has boomed since 2005, when visa requirements for tourists were removed, and has been fuelled by high unemployment. The group initially wanted to stop the country, which attracts ads for "mail-order brides" and "pleasure weekends" in Google searches, from slipping further into the hands of sex tourists and human traffickers.

So in one of Femen's earliest protests, in 2008, members dressed up in high heels and fishnet stockings and shouted "Ukraine is not a brothel!" on Kyiv's Independence Square. But the group soon realised that, in addition to Ukrainian politicians, sex-seeking foreigners also needed to be taught a lesson. When The Rock FM, a popular New Zealand radio station, organised a "win a wife" competition, in which men were flown out to meet potential wives in Ukraine, Femen arrived topless at the airport to humiliate the winner, a wine maker named Greg.

Because Femen fight against patriarchy in all its forms, their protests are broad in scope. In November, the group infiltrated a Catholic rally against gay marriage in Paris. They were dressed only in black underwear, stockings and black and white nun's headdresses. Slogans like "In Gay We Trust" and "Gay is OK" were scrawled on their naked upper bodies. Most recently, they stormed a polling station where Berlusconi, Italy's former prime minister and lover of "bunga bunga" parties, was casting his electoral ballot. Half-nude and screaming "Basta Berlusconi!" the women attempted to make their way towards the politician before they were wrestled to the ground by police. Some members of Femen have been arrested up to 40 times in the past few years for stunts like these. 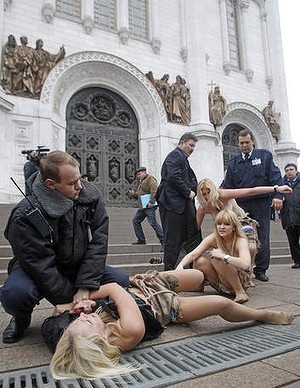 The audacity of such protests has inspired many women to join what is often referred to as Femen's "army". Femen claims to have enlisted women from across the world, in countries ranging from Tunisia to the United States. Last September, at the invitation of French feminists, they opened an office in Paris. They established another centre in Berlin earlier this year. In both places, women receive physical training for future protests. Femen members say they plan to open their next international office in Brazil.

Meanwhile, undemocratic, oppressive regimes see them as a considerable threat. Femen members claim to have been abducted by state security officials on two separate occasions - in Ukraine and Belarus. The worst abduction experience was in December 2011, in Belarus, often referred to as Europe's last dictatorship. After an anti-government protest, Femen members were dragged to a car by men in black clothes whom they believe worked for the KGB. The women were taken deep into a forest and told to strip by men brandishing knives. The men cut the hair of two women and, after dousing them in oil, threatened to set them alight. "We were psychologically tortured," Alexandra Shevchenko, who heads Femen's Berlin office, said of the ordeal in a phone interview. After many long hours, the women were ordered to dress, bundled in a car and dumped near the Ukrainian border.

Yet many feminists do not take Femen seriously. "Taking off your shirt in order to get the sexist media to take photos of you plays on the sexualisation and objectification of female bodies and reinforces the idea that women's bodies are to-be-looked-at," wrote a contributor to Feminist Current. Feminists in their native Ukraine are equally upset with the underdressed upstarts. "Femen's activities give the impression at home and abroad that Ukrainian feminists are rabid women who show off their breasts," Lajma Hejdar, the head of the women's organisation Women's Network told Deutsche Welle.

The backlash against Femen is akin to the feminist critique of SlutWalk that questioned both the movement's use of the word slut and the "sexy" outfits of some protesters. Rebecca Traister wrote in The New York Times Magazine that SlutWalkers "dressed in what look like sexy stewardess Halloween costumes" and added that the movement "seems less like victory than capitulation (linguistic and sartorial) to what society already expects of its young women". Femen is vulnerable to the same attack.

Femen members have defended their nude protests, which they describe as "sextremist", on two counts: that they take ownership of the female body and that they ensure press coverage. While it is impossible to deny the truth of their second claim, some have argued that press coverage does not equal impact. As one feminist blogger at the Huffington Post put it bluntly: "Men aren't listening to the message. They are wanking to the image."

Amana Fontanella-Khan is the author of the forthcoming book Pink Sari Revolution.