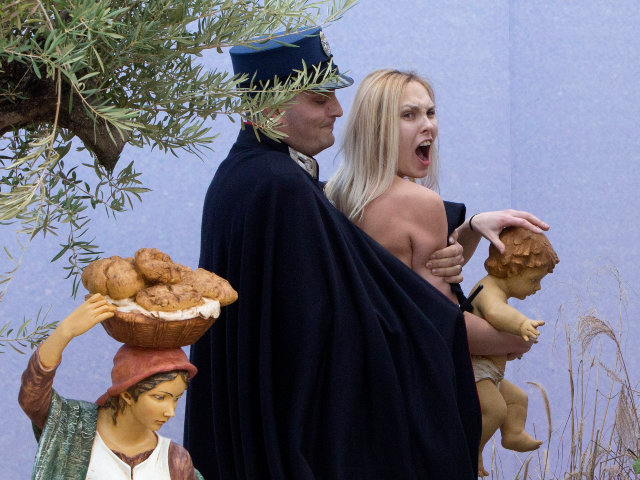 On Christmas day a topless Femen protester stormed the nativity scene at St. Peter’s Square and stole a statue of the baby Jesus after the Pope’s Christmas address.

A Vatican guard quickly cornered the protester, covering her with his cape and took back the statue.

According to AFP, the protester–Inna Shevchenko–had the words “God is woman” written across her chest. After being captured by the Vatican guard she was taken to the local police station.

Femen has “staged similar stunts at the Vatican,” including one last month where they tried to thwart a Papal visit by showing wearing “only leather mini-skirts and flower garlands in their hair.”

One of the three protesters had the words, “Pope is not a Politician” written on her chest.

Femen originally formed in Ukraine to oppose “the pro-Kremlin regime” but also opposes the Catholic Church’s on gay marriage and abortion.