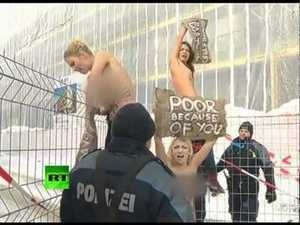 Police in Davos, Switzerland detained and later released three Ukrainian women who were denouncing the World Economic Forum of insidious rich people, armed only with their bare breasts and pithy chants such as, "Poor because of you." The women were members of the group FEMEN, which has been gaining attention recently for its criticism of the sex trade, as well as similar protests outside the Paris home of former IMF chief Dominique Strauss-Kahn and St. Peter's Basilica during an address the Pope delivered in November. Inna Schewcenko, a representative for the group, said that the Ukrainian women braved the freezing temperatures in Davos to deliver a message to the economic cabal that "we are poor because of these rich people who now sit in the building." Schewecenko added,

In this building now there are a lot of men but only a few women, the same way as in each parliament and in each congress. In Ukraine, we have a cabinet of ministers only for men. There are no women. We are coming there to scream, using women's voices, women's bodies to explain that women need to decide also.

Most startling about the video of the protest, however, isn't the bare-chested women, which certainly draw attention, but the fact that those three topless protesters appear to be the only women in the area.