Two members of the protest group Femen have been arrested after disrupting a controversial Muslim conference in Paris.

The topless women – with the words “Nobody makes me submit” painted on their chests – stormed the stage at the event in Pontoise, northwest of the capital.

The stunt saw the women shout feminist slogans in Arabic and French as two Imams addressed the audience, before they were physically removed from the stage by a number of men. 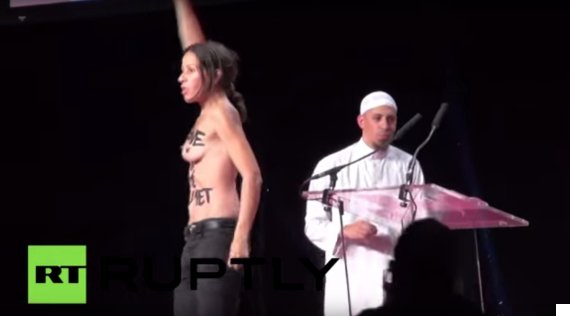 The conference - which reportedly addressed the role of women in Islam - was subject to a Change.org petition calling for it to be cancelled.

The petition states guests included: “Fundamentalist preachers such as Abu Anas Nader, known for having legitimised marital rape and the wider submission of women.”

Shevchenko told Huffington Post UK the protesters were from Muslim families and had raised their voices "in disgust at this public hate speech."

She added: "It was our duty to interrupt this enslavement event, and to let a scream of freedom be heard in the middle of their submission lessons.

"The Imams were very careful in their speech this time as the public outrage by the event was loud. The Imam was addressing the question of whether women should be beaten or not and said that as Mohammed didn't beat women, the men shouldn't do it as well.

"Just a minute later, Femen activists were brutally beaten up by the organisers of the event on the same stage."

A report by Buzzfeed France disputes Shevchenko's version of events however.

It states: "Medhi Kabir was asking Muslims to be exemplary with women, 'to follow the model of the prophet' who 'never slapped his wife' [before the Femen protesters entered the stage].

"Here is the last sentence said: 'We want Muslims and Muslims who behave like the Prophet behaved'."

According to the Telegraph the women were released after being questioned by prosecutors who will continue to investigate the incident. It reports the conference organisers say they will press charges against them.

Femen, which was started in Ukraine before moving to Paris, has become known for it particular method of protest, having demonstrated on a raft of issues from prostitution, female genital mutilation to the wearing of the hijab.