According to model she took a swing after runway invasion

We all knew the fashion industry was cut-throat, but it seems things got a little out of hand at Paris Fashion Week after two topless protestors from group FEMEN invaded the Nina Ricci show on Friday, with British model Hollie-May Saker claiming to have taken a swing for the girls after they interrupted her walk.

The two blonde protestors from Ukrainian feminist protest group, FEMEN, were wrestled to the ground by security after running onto the runway with slogans written across them. According to Scouser Hollie-May Saker, who took to Twitter after the run in, she was so annoyed when she freed her arm from one of the protestors' grasps, her fist landed right on the intruder's nose.

On their bodies, the two girls had "Model don't go brothel" and "fashion dictaterror" written in large black letters. 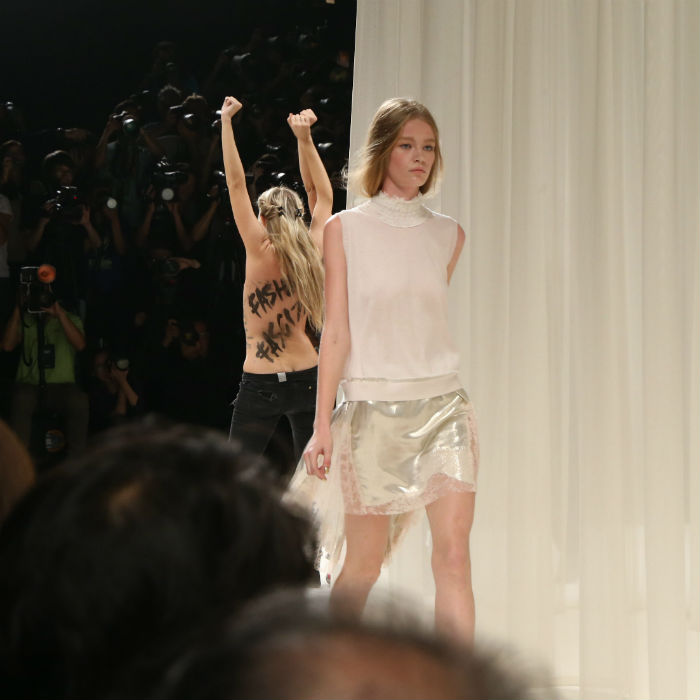 One of the protestors from behind (Splash News)

Hollie told the Liverpool Echo: "As she grabbed my arm she lifted my skirt exposing me. I pulled my arm back with such force that I landed a punch square on her nose.

"I was so angry but I knew I had to be professional so I carried on walking with a bit of sassiness."

We can't see any impact being made in the video above - but check it out for yourself and see the unidentified women attempting to cause chaos.

Hollie tweeted when she came off-stage: "FEEEEEEUUUUMIN THAT B***H RUINED MY WALK AND HAD HER SAGGY T*TS IN MY FACE."

The show had been for Nina Ricci, and security were quick to rush on stage and get the ladies out of the way in time for the next model to pass.

Watch it all unfold above.