The website of topless feminist group Femen has been hacked and replaced with a page declaring the women "dirty pigs." 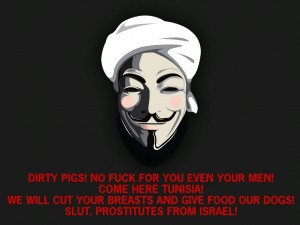 The message, in broken English, was also misspelt out in red and black capitals and reads "dirty pigs, no f**k for you, even for your men. Come here Tunisa we will cut your breasts and give food our dogs. Die sluts, prostitutes from Israel!" How the Femen site currently looks

The group posted on their Facebook page "Dear friends, our website http://femen.org/ was hacked. Don't trust the information that will be posted there till the moment we inform you that the website was fixed."

Already there is some reaction online to the hacking, with one man posting on Femen's Facebook page "Congratulations, Femen. By hacking your website they expose their own fear and their powerlessness before you. You are winning."

Another said "I'm impressed they were able to do that. Primates... Don't even know how to speak English."

The women's rights group has received international news coverage in recent weeks amid fears for Tunisian topless protester Amina Tyler after threats to stone her to death were posted online.

Amina has become a symbol of Arab women’s fight against religious obscurantism. However the 19-year-old has disappeared from view after posting her picture online, prompting fears for her safety.

In the last interview before she disappeared she told Italian journalist Federica Tourn that women in Tunisia are ready for change.

She said: "Women have reached the height of self-determination: we no longer obey any authority, neither family nor religious. We know what we want and we make our own decisions." Amina Tyler: One of the pictures posted on the Femen Tunisia site

In the meantime, other Tunisian women have decided to take up the mantle, exposing themselves to the risks involved in showing their bare breasts, and Femen groups have sprung up in other Arab countries, from Morocco to Algeria. Social media accounts of the Tunisian branch of Femen have been infiltrated by hackers before, with videos and pictures on the site being replaced by verses from the Koran.

At the time Femen said in a statement they were furious about the "barbarian threats of the Islamists about the necessity of reprisals against the Tunisian activist Amina," .